Skip to main content
I watch too many YouTube videos just like the next guy.  There's no shortage of any kind of video you're looking for.  Every niche, genre, angle is covered.  Hence, the reason for watching too many videos.  I am usually a silent shopper though - I "stick and move".  I don't typically leave comments unless I'm really moved to.  Maybe because I try to answer viewer comments on my own channel I feel commented-out.  The other day I saw this video that moved me. 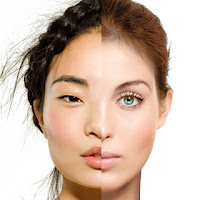 In this video, "Young Korean Girls Have Surgery to Look More White", a part of Korean culture that doesn't settle well with me was exposed.  That of plastic surgery.  Specifically, eyelid surgery.  A procedure done to the eyelid to give the appearance of a fold.  Because of the natural shape of Asian's eyes, it can at times seem like there is no fold.  Which is not the case.  Of course there's a fold or we wouldn't be able to blink!  This procedure just enhances the appearance.

This eyelid (aka double eyelid) surgery is literally an epidemic in Korea and other Asian countries.  The driving force behind it is to create a more "Western" feature.  In Asian countries, the term "Western" still leans to the side of Caucasian people...white.  There, I said it!

There is still a preconceived notion that western societies are all white, when in fact that is further from being the case than it's even possible to explain to the average Korean or Asian.  Nonetheless, this is the impression they have, and they still have many different procedures done to look more white.  That's right, I said it again.  Don't flame the messenger.  I'm just telling you why they have these procedures done.  And quite frankly, they're ridiculous.  It's gotten so out of hand that even age and gender don't discriminate when it comes to getting their eyelids done.  Here's proof.  The original video I watched that caused me to feel the need to react.

Can anyone in their right mind tell me that this is not outrageous?  A 12 year old girl getting plastic surgery.  The worst part of it is the mother signed-off on the procedure.

There were so many things to comment on regarding this video I made a rant vlog of my own.  Let me know your views on the whole thing.  I don't think we'll disagree on much, if anything.  Here is my reaction, caught on film...