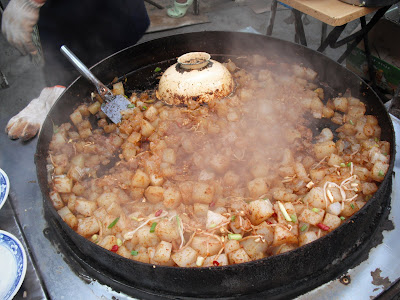 We've just spent a few days in Xian, a historic city that most tourists use as a launching pad to see the terracotta warriors. As one of the only cities in China to retain its city walls, Xian maintains an ancient feel to it, and I got the distinct impression I was entering the heart of China.
It was in the city's Muslim quarter however that my senses really got to work. These busy, tightly packed streets sizzled and steamed with street food energy, making a meandering graze the only option really available.
My first stop was a dish whose provenance initially eluded me. Despite having the appearance of a large potato curry, closer inspection revealed the "potato" to be opaque and of a wobbly, jelly like consistency. It wasn't until I got up close and personal that I realised these chunks seemed to be closely related to glass noodles. Being slightly less dense than the noodles, the sweet potato starch (anyone?) pretty much disintegrated as soon as I put it in my mouth, having an odd cooling effect on the chilli, cumin and bean sprouts it had been cooked in. 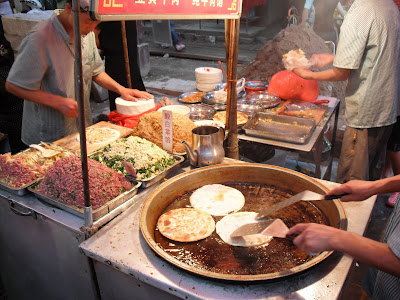 Next was a stall specialising in meat-filled pancakes. The three fifteen year olds who ran it had an incredible efficient production line on the go (see picture.) The result was a neat, tasty, quesadilla sort of affair, the enjoyment of which was slightly hampered by its retention of a good deal of the oil it had been fried in.
My graze also took me by way of a dense, sweet, peanut cake, and a spicy, salty chicken kebab, and more street food than I could contemplate.
To be continued...