I caught up with Laney over the weekend and told her about my Tianjin visit with Daniel and all about the city and Italian Street. I also told her how I managed to figure out the train system during the week and that I mastered up the courage to find my way to Tianjin by myself. That day was very successful as I spent the entire day at H&M and seeing other stores nearby.

I told her how I wanted to go to Culture Street in Tianjin but hadn't had the chance to do it yet. I've been told that in Culture Street, you will find all sorts of Chinese souvenirs, which would make great gift ideas, especially with Christmas right around the corner. What a great opportunity it would be to go. She wanted to know how to catch the train into the city, so together, we decided we would go into the city on Monday, visit Culture Sttreet and have some lunch nearby and then head back home.

I waited for her outside the TEDA International gates. After a little while, I saw her walking towards me. Apparently she and another Chinese local were having trouble crossing the road as the heavy morning peak hour traffic was making it near impossible to get to the other side. Typical China. We had a good laugh and with that, jumped into a cab.

We asked to be taken to the Tanggu Train Station, which is about 10 minutes from our houses. We went up the escalator, lined up and waited for our turn. One thing I've learnt, is that the Chinese don't have any respect for who was in line first. This lady just jumped right in front of me and I said something in English about how rude it was. She must've understood my tone and turned around and giggled while bowing and got right back behind me. It just bothers me how inconsiderate people can be. I still haven't figured out if they do it because I'm a foreigner or if they do it to everyone. Laney's had the same happen to her, while she's been out grocery shopping. It's just rude... the most irritating thing of it all is that they think they're in the right. Grrrrr.

After we paid our ticket fee, as we walked towards the stairs, there were two signs. One saying going to (I can't think of the name, but it starts with the letter D) and the other saying 'To Tianjin' We walked up the stairs going to Tianjin and waited. From my one and only experience, I told Laney that as soon as the train approaches.... just push!!! and get a seat straight away. Don't look back. Once again; they don't care if there's children or even elderly people around. They just push, sit down and ignore everything around them. So, unfortunately, you've got to play the same game.

We both managed to get seats next to each other. I told her to sit back and enjoy the 40 minute ride into the city. Along the way, there are alot of structures being built. Alot of apartment blocks and industrial factories and warehouses. They're even in the finishing stages of building an Ikea, which got us both really excited. 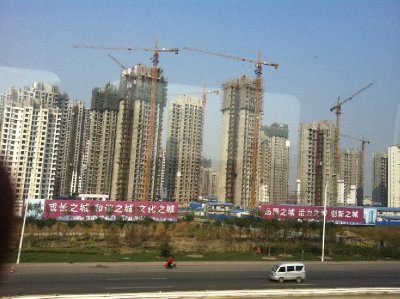 On the way to Tianjin 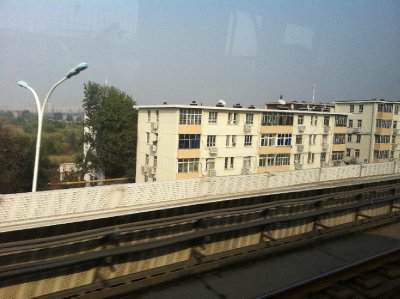 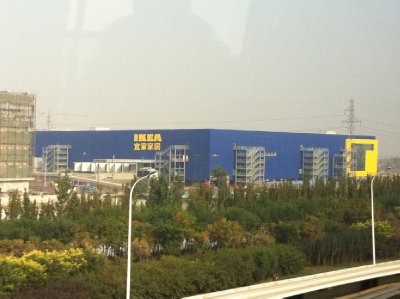 We arrived at the last stop. Although it wasn't Tianjin. The Tianjin station, still hasn't been built, but they have it on the map. That's another thing!!! They tend to plan for the future here, well in advance. All these apartment blocks, warehouses, train stations and shops.... they're empty. They know the growth in population here is booming and when it does, they'll have everything ready. It's amazing to see how quick the city grows by the day.

So because the station was non existent, we had to get off two stations before. Once outside, we jumped in a cab and showed him a note we had on Culture Street. He knew where to take us, which was a good sign. We enjoyed the trip to Culture Street as we passed the city river and took in the chilly environment surrounding the big skyscrapers. 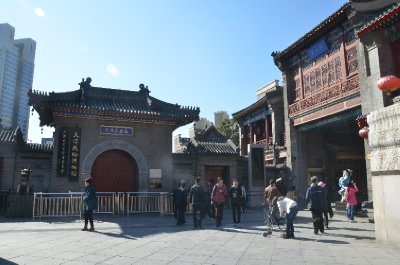 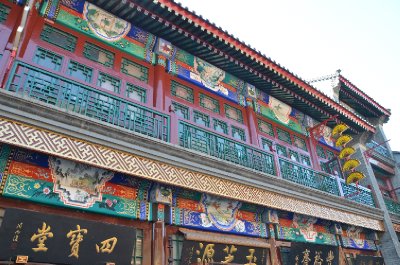 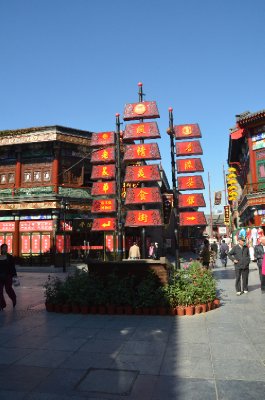 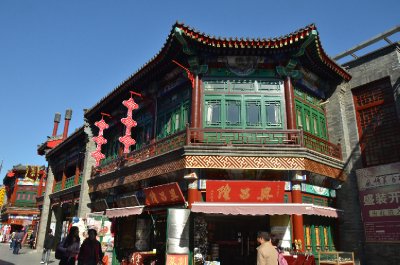 It was really cold this morning and could feel the breeze freezing our little fingers. I wasn't really prepared for the coolness. We walked into the Street lanes and marvelled at all the shops. Laney was right. I would love this Street. It was a good idea I brought my backpack with me, as I went all out and bought some really nice things. I bought some bracelets for the girls in my family, some Traditional Chinese masks for Daniel and I to hang in our home, several little sculptures and figurines and some glass art works. Really beautiful items...ohhhh and for myself, a jewellery box with exquisite cherry blossoms painted on the cover. 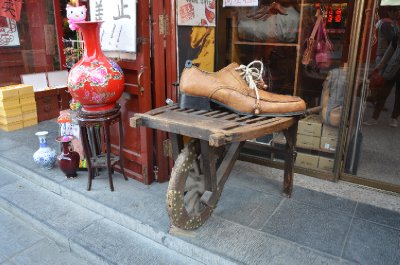 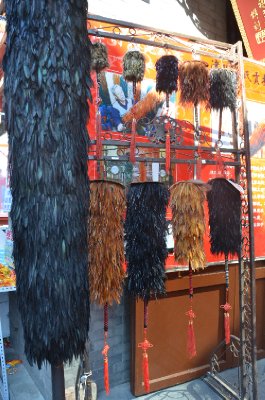 I wonder how many feather are needed to make one duster??? lol 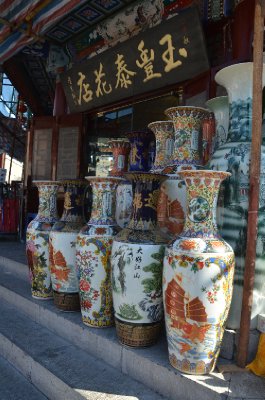 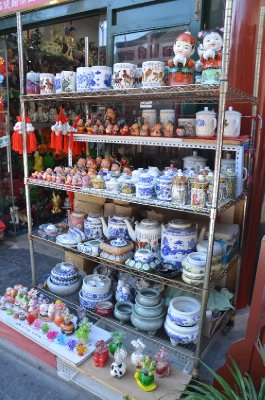 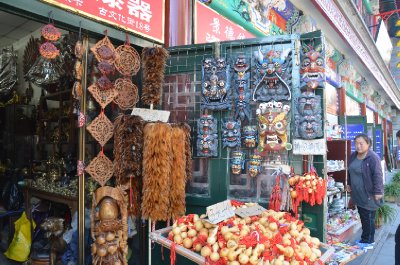 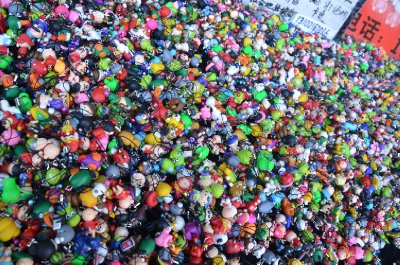 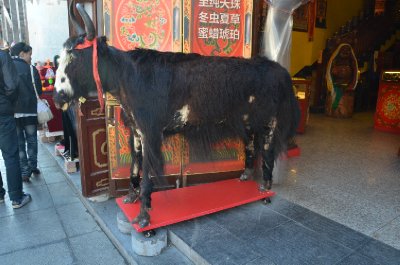 This is a stuffed cow from Mongolia 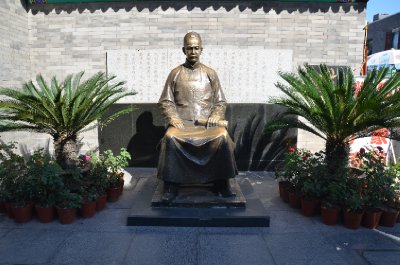 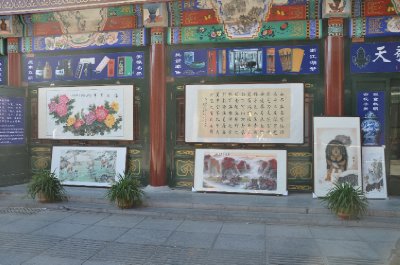 Paintings...Check out the Tibetan Mastiff on the right! 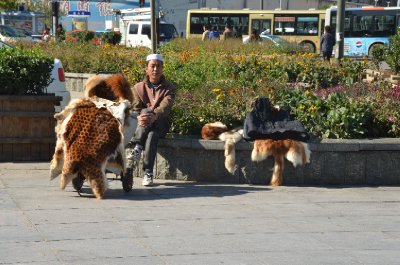 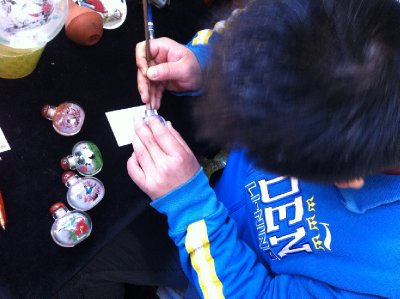 This man painted beautiful designs inside tiny glass jars. Here is is painting one that's for my sister..

We stopped shopping because we could no longer carry anymore. Plus we were starving. We headed to a nearby Pizza Hut and sat down for some soup and some vegetarian pizza.

The ride back home was easy. We caught a cab back to the same station, bought a ticket back to Tanggu and sat back and relaxed. I love Tianjin, as it has so much more to offer then TEDA and neighbouring Tanggu, but it's abit far to get to everyday. I think it'd be a great idea if we gave ourselves a once a month trip into the city for a spot of shopping