St Georges Market, on the south eastern edge of Belfast city centre, is one of the best places in the city to catch a glimpse of Belfast’s past and present. Dating back to 1896, this beautiful structure of red brick and cast iron was initially built to house an outdoor food market that had been in the area since the 17th Century.

Over the years it has been put to a number of uses. It was used as an emergency mortuary for the victims of Nazi bombing raids during World War II, and gradually developed into a general goods market. By the early 90s the market had fallen into disrepair, and a massive renovation project was undertaken to restore it to its former glory. Today, the market is home to a vibrant Friday and Saturday morning market, and is occasionally used as a live music venue and exhibition space.

When I visited on Saturday morning it was easy to see why the market is so popular. The high, vaulted, glass ceilings allow plenty of natural light and ventilation, while the expansive floor space allows for easy browsing of the multiple food stalls.

Following a rather disappointing experience at the Belfast Christmas Market involving Paella and Chicken Tikka, I decided to go local for the day and try some good old fashioned Norn Iron grub. 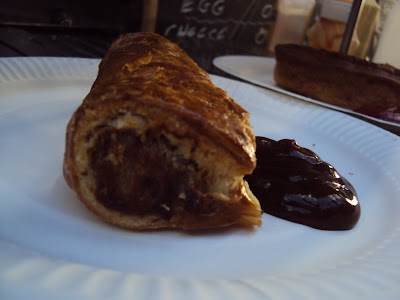 First up was a homemade sausage roll from one of the bacon, sausage and burger-style purveyors. At only £1, this was the cheapest item on the menu and exceptionally good value. Light, crispy pastry surrounded a substantial filling of coarse, well seasoned, sausage meat. Sausage rolls can sometimes feel processed, watery and gross, but this one hit the spot nicely. 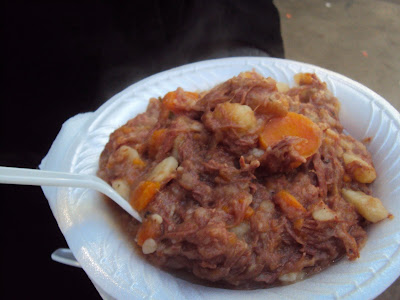 Next up was a bowl of hearty Irish stew. This involved a semi-liquid mass of roughly mashed carrots, onions, potatoes and what looked and tasted like shredded, slow cooked beef. Eaten with plenty of salt and brown sauce, it was tasty, warming, and brought back good memories of primary school dinners.

Elsewhere, there was more exciting food on offer. The market has a real focus on quality, local produce and it’s great seeing the Northern Irish food industry get some good exposure.