1. National
1) Seoul express ‘regret’ at Abe’s lack of apology
Korean Foreign Affairs Minister Yun Byung-Se expressed “regret” that PM Shinzo Abe lost golden opportunity to confirm the correct perception of history by failing to properly acknowledge Japan’s responsibility for WWII at Abe’s speech in the U.S. Congress last week. Yun’s comment was made to lawmakers who are concerned about Korea being left alone while Abe and Obama are having nice dinners in Washington last week, and Abe and Xi Jinping are taking smile photo in the Asian-African Conference in Jakarta last month.

The best days Korea and Japan shared together was during 2002 Korea-Japan World Cup to my memory. There was a match between Japan and Belgium, and, surprisingly, I saw all Koreans were rooting for Japan as Koreans took Japan as an ally in a crusade against soccer empire Europe. It is about time Korean president Park Geun-hye and Abe pick up a ball and play soccer together to mend fences.

2) A Kenyan to Pyeongchang got lost Pyongyang
WSJ reported a story of Daniel Sapit, a farmer from Kenya, who landed in Pyongyang in North Korea to attend a conference in Pyeongchang in South Korea, the host city for 2018 Winter Olympics. Mr.Sapit asked his travel agency to buy a ticket to Pyeongchang, but the agency thought it was a misspelling of Pyongyang. Mr. Sapit found he was in wrong place only after landing in Pyongyang from Beijing, and was able to get out only after $500 fine for illegal entry.

In 2001, Hyundai engineers sent an e-mail to my colleagues in Detroit to have a technical meeting at its R&D center in N.Y. Never heard of Hyundai’s technical center in N.Y., my American friends asked me its address. The N.Y. that HMC engineers meant was NamYang, the city Hyundai’s main R&D center is located near Seoul. Had my friends not asked me, they would have booked a flight to N.Y. I mean, New York.

2. Economy
1) More men likely to divorce
To Statistics Korea’s marriage data from 1990 to 2010, the chance of divorce among men rose from 10.4% in 1990 to 25.1% in 2010, up 2.5 times over the last 20 years. The divorce rate for women increased from 9.4% to 24.7%. The number of remarriages has declined as more than seven out of 10 couples who divorced chose to remarry in 1990, but that dropped to half by 2010. Experts say the trend stems from a view that marriage brings no great benefits and living alone get easier and more convenient.

My first marital crisis came in August 1989, just three months into marriage in Quebec. While I wanted to buy a humidifier just right for the living room, my wife kept insisting a big one that could wet whole Taj Mahal. We ended up buying what I wanted, but my wife kept grumbling even at home. The humidifier thus had to face the fate of leaving my hand, flying out the window and landing in the backyard broken. My marriage has been O.K. since, except for 130dB whining noise I hear each time I sneak out to play soccer on Sunday.

2) K-pop helps Korean economy
The economic effect of the so-called Korean Wave created by young Korean pop artists was estimated to be 12.6 trillion won (U$11.6) in 2014, according to Korea Trade Promotion Agency. The figure indicates that Korea’s industrial output rose 4.3% from last year thanks to the popularity of Korean pop stars and goods. The game industry benefited the most, with 2.2 trillion won in production inducement, followed by the tourism industry with 2.1 trillion won and the food and beverage industry with 1.8 trillion won 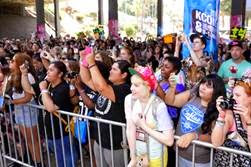 While people outside Korea were enjoying Korean Wave, Koreans were deep in Britain Wave when Paul McCartney performed in his or Beatles’ first ever concert in Korea on May 2. Over 45,000 fans braved rain to enjoy nearly 40 songs the 72-year-old British belted out. It was 100 times more action filled than Mayweather-Pacquiao fight held in Las Vegas the same day.

3. Auto Industry
1) Hyundai hit by worst quarterly earnings in years
Hyundai Motor announced its Q1 sales were 20.9 trillion won ($19.3B) with operating profit of 1.58 trillion, the worst in four years. Sales dropped 3.3%t from a year ago and year-on-year operating profit dropped by 18.1%. The CFO of Hyundai said the strong won against Euro and other currencies in the newly developed nations had a negative sales impact in the global market. 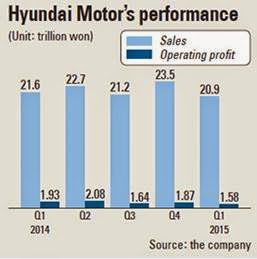 Another factor attributing the poor sales performance is the erosion of domestic market by import models. Hyundai and its sister Kia enjoyed nearly 80% market share until mid-2000, but have seen it go down to 60.6% in January this year. Hyundai marketing better come up with good plans to please its domestic customers or they may end up humming what Paul McCartney sang in Seoul; Yesterday ♬.
Regards,
H.S.
Korea TESOL: Helping Teachers Connect
Promoting learning and cross-cultural understanding among English Teachers and Learners in Korea.