Going to Seoul during Christmas or having Korean friends or family that you want to greet this holiday? So apart from winter gear, cards, and gifts, there are a few things you must pack.

Well, it’s time to add how to say Merry Christmas in Korean to your to-do list.

Here in this article, Let’s take a lot of various ways to greet someone a Merry Christmas in Korean, and also the traditions and vocabulary that go along with it.

What Is “Christmas” In Korean?

The word for “Christmas” in Korean is 성탄절 (seongtanjeol).성(Seong), is the Chinese character meaning “holy”,탄(Tan) means “birth.” and 절 means holiday.  So together 성탄절(seongtanjeol) means “the festive day the holy person was born.”You can also say the loan word 크리스마스 (keuriseumaseu).

People do not really say 성탄절(seongtanjeol) very often. The Korean word for Christmas is “크리스마스(Keuriseumaseu),” which is quite widely used in daily conversation.

It is simple to remember because it sounds pretty similar to the English word for Christmas. But even so, please note that this is a casual form of the Korean word, & Christmas is pronounced in a Korean way.

How To Say Merry Christmas In Korean

The common way to say Merry Christmas in Korean is 크리스마스 잘 보내세요 (keu-ri-seu-ma-seu jal bo-ne-say-yo).it is made up of the words 크리스마스 (Christmas), which means ‘well,’ and 보내세요 means ‘please spend time.’ it literally means ‘Please spend Christmas well’. you can use the casual form 메리 크리스마스 (meri keuriseumaseu)/크리스마스 잘 보내 (keuriseumaseu jal bonae) with friends. 행복한 크리스마스 되십시오 (haengbokan keuriseumaseu doesipsio)is the most formal way to wish someone a Merry Christmas.

Here are the three most common ways to say Merry Christmas in Korean as well as its pronunciation and hangul. 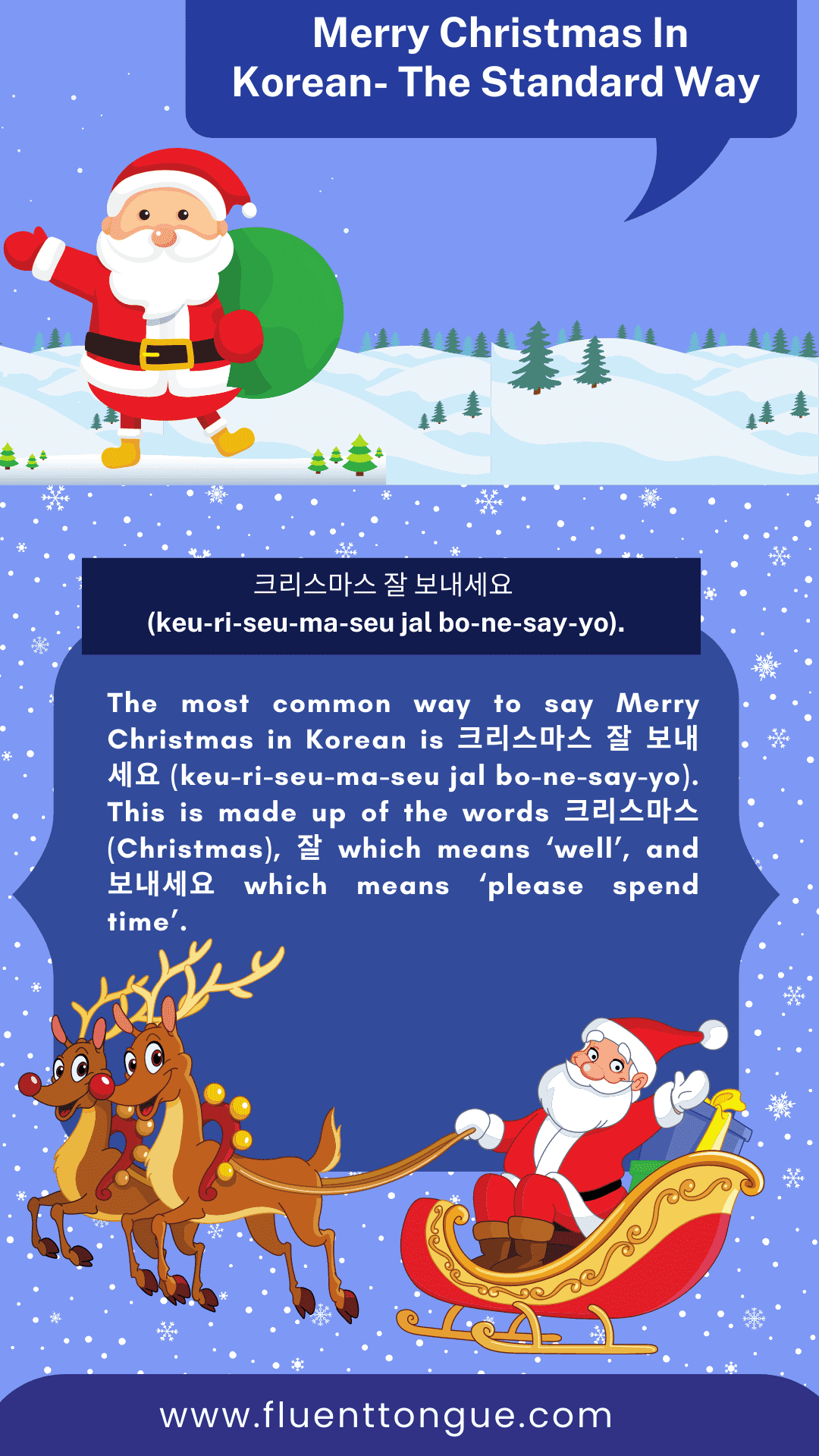 Another common way is to use the phrase 크리스마스 잘 보내요 (keuriseumaseu jal bonaeyo), which has the same meaning but without the extra politeness of the “세 (se)”. But Korean prefer to use 크리스마스 잘 보내세요 instead of this. 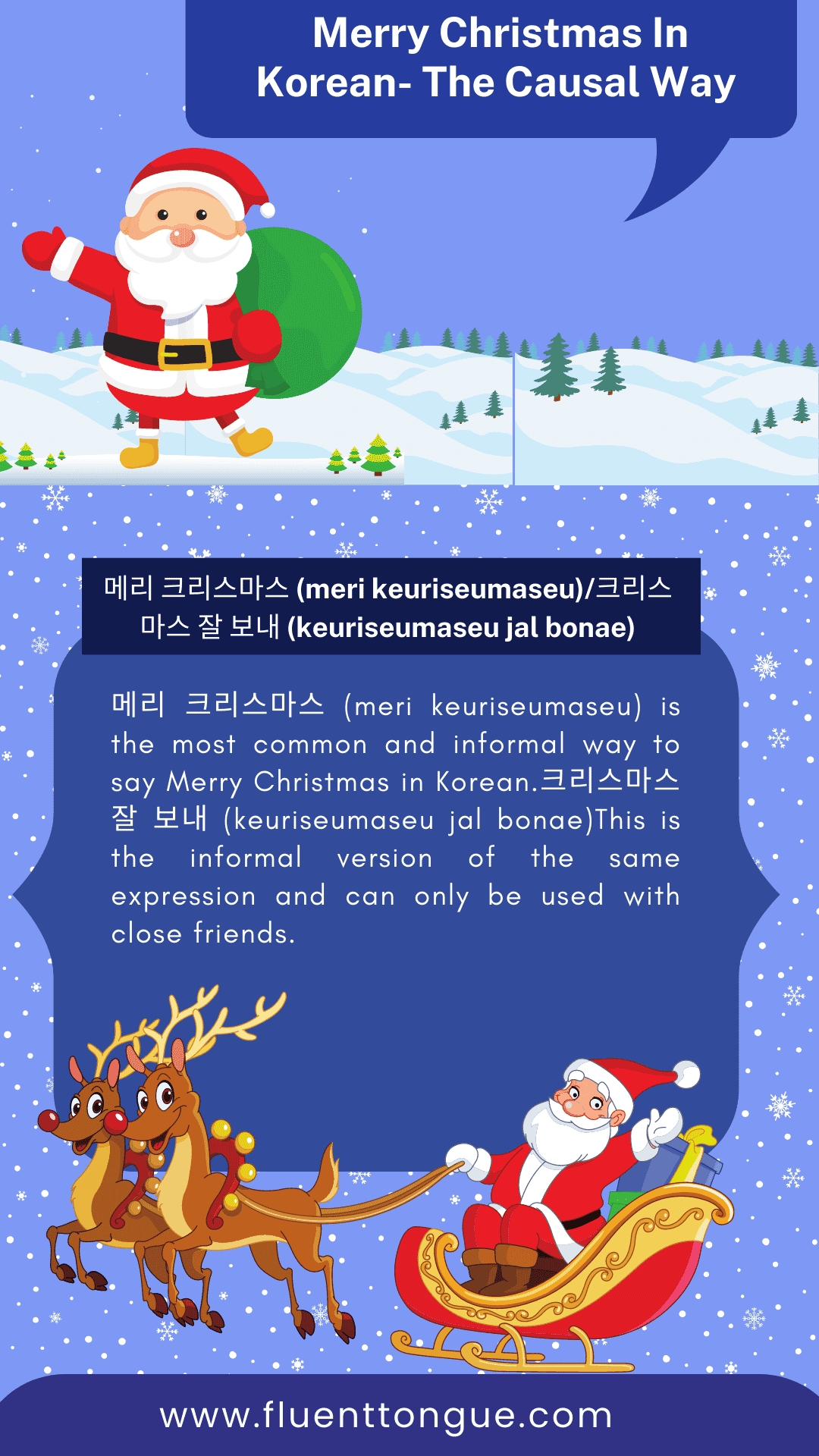 메리 크리스마스 (meri keuriseumaseu) is the most common and informal way to say Merry Christmas in Korean. It is basically koenglish version of merry Christmas but the pronunciation is Koreanized.

But, take note that this form of Korean word is informal and Christmas is pronounced in a Korean way.

If you are not sure which form to use, just stick to the standard and formal versions of “Merry Christmas” in Korean.

크리스마스 잘 보내 (keuriseumaseu jal bonae)This is the informal version of the same expression and can only be used with close friends. 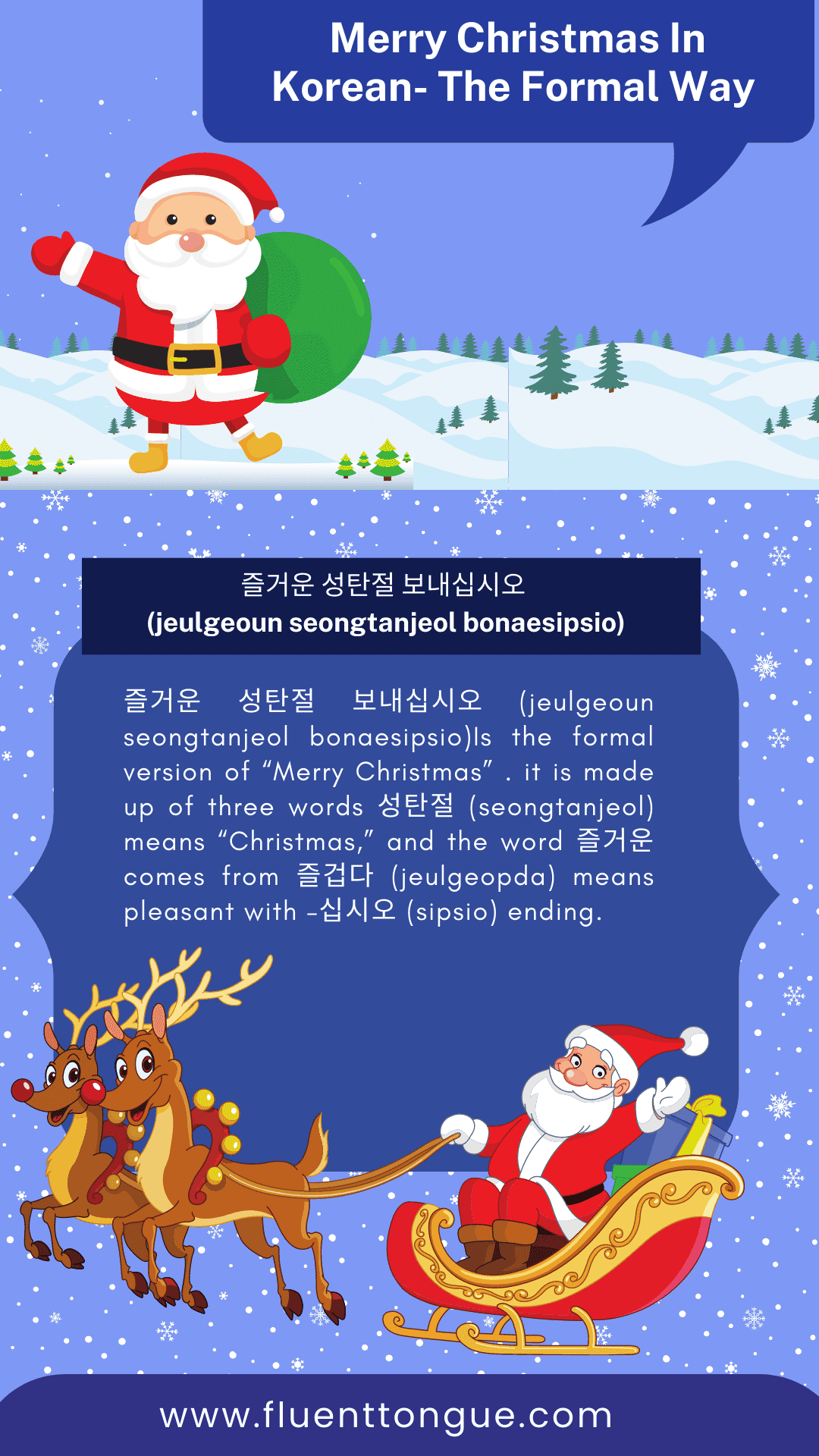 but it’s not used as often as 크리스마스 (keuriseumaseu).

You can safely use it with all groups of people, and nobody will get offended.

크리스마스 이브 | How To Say Christmas Eve In Korean

On the night of the 24th of December, families gather around to welcome the 25th of December by eating with the whole family, and gift-giving occurs. They also do it in Korea, but not everyone has the opportunity to do this since some have their families in the province.

Do you know how to say “Santa” in Korean? How about “Snow” in Korean? If you don’t, then we’ve got you covered.

Here are some common Christmas Korean vocabulary words related to Christmas that you can use during the holiday seasons in Korea.

How Do Koreans Celebrate Christmas? |Korean Culture And Christmas Traditions

There aren’t really any big Christmas traditions for most Koreans (unlike Chuseok and Seollal). You can expect interesting things at Christmas in South Korea

South Korea is the only East Asian country to recognize Christmas as a national holiday, so schools, businesses, and government offices are closed on Christmas Day. Stores remain open.

Christians in the country, usually go to church on Christmas eve and get together with their families on Christmas day, watch Christmas movies, go out on a date or hang with friends.

Some families put up Christmas trees, people exchange presents, and stores do put up holiday decorations.  In fact, Christmas lights and decorations are common in Seoul.

How Do You Say Merry Christmas And Happy New Year In Korean?

This is how you greet this holiday in Korean. Though it literally means spend Christmas well and have a happy new year everyone.

Voila! you now know how to wish a Merry Christmas in Korean – and a few other good options, besides!

As the end of the year approaches and to make the season even more special, you need the perfect greetings to say to your loved ones.

I hope the Korean greetings listed in this article will help you write a Christmas card, a business email, or wish in person.

Now that you know how to say Merry Christmas in Korean, go and greet your Korean friends and loved ones!

Have you ever celebrated Christmas in Korea or been invited to a Christmas party? What was it like? Share your special experience with us in the comment below.

We can’t wait to hear from you