I don’t like or dislike the entire “Korea Experience.” That is to say, I’m not in love with the place, but I don’t hate it either. I’m simply a non-person here, a marriage migrant who rolled the dice and accepted the outcome.

We all have experiences both good and bad in Korea, but for me, most of my experiences are simply neutral. I don’t experience mind-blowing revelations, nor do I experience extreme depression or feelings of hatred. Day after day passes, and my experience mostly remains neutral. In fact, I make a concerted effort to exert as much control over my neutral “Korean Experience” as possible.

For example, I avoid areas with large numbers of publicly intoxicated people. I also avoid driving for reasons of both health and sanity. Not going to drinking areas and avoiding driving have significantly reduced my number of unpleasant encounters with the locals. I mostly encounter Koreans in positive or neutral situations, and largely avoid unpleasant situations. This has allowed me to avoid the trap of constantly harboring feelings of negativity.

I have on occasion met other foreigners who think that Korean shit smells like roses. These foreigners are usually the ones who majored in “Asian Studies” or Japanese. They are usually the only non-Asian person in their group of friends. In most cases they probably spent most of their youth looking in the mirror and wondering “why aren’t I Asian?”. They probably had k-pop posters on their walls when they were 12 years old and living in rural Tennessee. These are some of the freakiest foreigners I’ve encountered in both Korea and Japan. They almost always seem to know Korean history and culture better than the locals themselves. They are usually fluent in one or more Asian languages not out of necessity or utility, but out of shear interest or longing to assimilate into an Asian society completely. These foreigners often feel more comfortable around Asians than they do with members of their own ethnic group.

For these individuals, no coping method for long term survival is required. Asia IS their coping method, and living in Asia among Asians is how they cope with life in general and their identity crisis in particular.

For the rest of us, developing a way to cope or simply pass the time can be extremely useful. In the relative absence of drugs, alcohol is a popular expat coping mechanism in many countries. I used to have a motorcycle, and riding the motorcycle was my method of relieving stress. Unfortunately my motorcycles kept getting stolen, as bike theft seems to be a popular past time here. If I had my own garage, or a first floor apartment, I’d probably buy another bike. 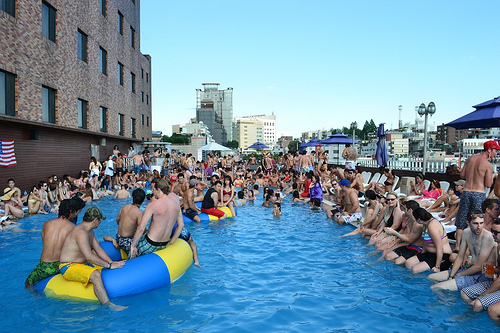 I asked my friend Henry how he has coped with life in Korea for a decade. He replied “I drink heavily in the winter and during the summer I go to the pool at the Hamilton hotel, lay down on a beach chair, close my eyes, and pretend really hard that I’m in Thailand.” During the summer, the pool at the Hamilton hotel has everything a tourist beach in Thailand has; noisy obnoxious drunk foreigners, loud music and obese women in swim suits. I suppose if you drank enough beer, closed your eyes and concentrated really hard, you could probably imagine yourself laying on a beach in Thailand.

I personally prefer to lounge on the roof of my apartment and drink cold beers in the summer. The roof is largely abandoned as the locals strongly dislike brown skin and will seemingly do everything in their power to avoid sunlight during the hot summer months. So I sit on the roof with a plastic lounge chair and a big cooler filled with ice and cheap canned beer.

I also try to stay as busy as possible; time passes by much quicker that way. I know a few white girls who have dedicated all of their free time to taking Korean lessons, watching Korean TV, listening to Korean music and looking for Korean boyfriends but I just can’t picture myself assimilating into Korean society. I’m satisfied with my life in Korea, but I have no desire to become Korean or live the ‘Korean Dream’ as many migrants from less developed countries might.

Part of this stems from the idea that I am only a temporary resident of Korea. I have a Korean spouse, and have lived here for almost 8 years, but I don’t really view myself as an immigrant. I see myself as a long term temporary resident who will after a period of 20 or so more years simply pick up and leave, moving on to some place warmer and more friendly for retirement.

The longer I live in Korea, the more I understand the “flock” mentality of Koreans living in America. I understand their need to maintain their own identity, and socialize with others of similar background. I understand their hesitation to adopt a 100% American lifestyle. I think for the vast majority of first generation immigrants, the feeling of permanence doesn’t really exist and that is one of the huge barriers to becoming fluent in a language or fully versed in a culture. I have a lot of freedom and autonomy in Korea, but no matter how long I stay here, I’ll never feel Korean nor will I feel any lasting bond with the country. I’ve learned a lot of things both good and bad from Koreans, but when I hit 50 years of age, I think I’ll be ready to move on. Until then, it’s cold beers on the roof and loud poolside dreams of Thailand at the Hamilton hotel.

The Expat has been in Korea for eight years. He is married to a Korean woman and has no children. He used to teach English but now works outside the ESL industry. The Expat likes to bitch and moan about day to day life in Korea. Most of his writings consist of commentaries on life in Korea and being married to a Korean person. The Expat is famous for writing 3000 word posts about various aspects of life as a foreigner in Korea.  Read more from The Expat at expathell.com

Editors’ Note: From this issue forward 3WM will be moderating all comments and requiring that any commenter input a legitimate email address when signing in. Previously, anyone who’d already entered information and posted a comment had free reign to post whatever he/she wanted at any time (unless it had several links in it). There will no longer be instant posting. We thank our readers in advance for adhering to this guideline.


Note: There is a print link embedded within this post, please visit this post to print it.