We thought about catching the Renfe speed train to Barcelona, but cost wise, it made more sense to hire a car and road trip 600km's across the Spanish country to Barcelona. They advise that it will take around 6 hours (by they, I mean fellow travellers and guidebooks) so we figured we'd make it well before 4pm. We set out on our newly hired red mini, which we organised through Hertz. Daniel is used to driving on the wrong side of the road, as he has done so for the past 8 months in Korea, so for him, this was all too exciting. We packed up the car with our luggage and snacks and off we went as we followed the directions we printed off google the night before.

Our start time wasn't what we wanted, so at 9.30am we were still having trouble trying to find the exit. Once out of central Madrid, we were on our own. We still hadn't had breakfast (bad idea) so it was disappointing that we had reached our first hurdle so soon. We managed to back track and get back on the A-2 freeway. 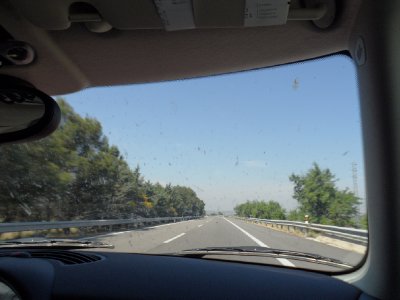 The road to Barcelona!!!

About 30 minutes into the trip, we exited to find somewhere to eat. We had chips and chocolate in the car, but we needed some ham and cheese. We found a little suburb, that only had one cafe open. I suppose, it's early on a Sunday morning, the chances of everyone being at church or still asleep were pretty high. Still, we were lucky this guy was open.

We walked inside, sat down at the table and the waiter came over. I ordered us 2 cafe's con leche and two bocadillos with a zumo de naranja (orange juice) The meal was prepared really quickly, and like always, tasted perfect. With our belly's full, we were now in a better mood to continue our journey.

The scenery to Barcelona is quite flat, but green. We were lucky to see deer along standing in the farm fields in the distance. Unfortunately I was unable to take photos due to the late reaction I had when I saw them, but they will forever stay in my memory. Every so often, in the distance, you could see stone houses that were debilitated and and crumpling. On our drive, we came across a town that had a castle!!! We were so excited, we decided to exit and go check it out. We parked our mini and walked over to the castle. Turns out, we were now standing in front of El Castillo de Torija (The Castle of Torija) It was massive!!! This was the first castle I had ever seen in real life, and here I was touching it and standing on it. Arghhh!!! As I looked around and marvelled at life (I was having one of those moments) I looked up and saw swallows flying in the sky around the Castle's towers. It was such a beautiful sight. We drove around the town for a little while to get a feel for it before we got ourselves back onto the freeway. 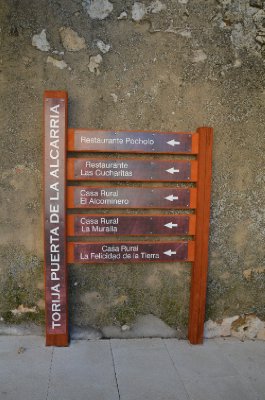 Torija- We are here 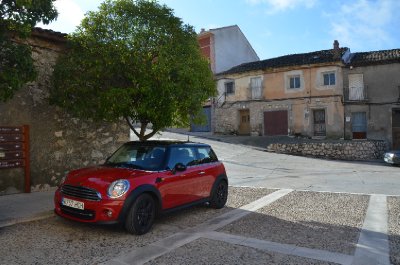 Our hot set of mini wheels 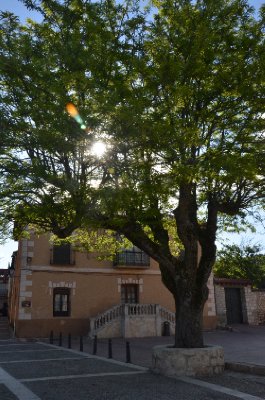 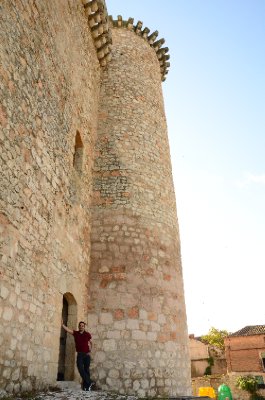 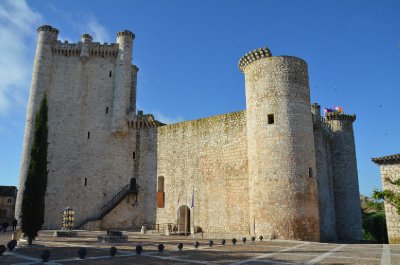 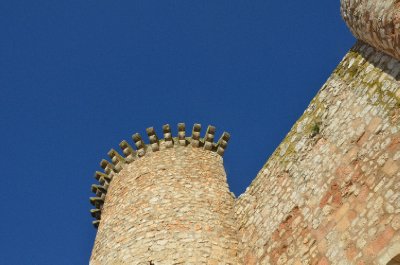 I love how blue the sky is in this photo

We noticed that as you drove, every few km's, in the distance you could see a giant, black, metal bull. It was quite funny, as the bulls would appear from out of nowhere and it felt like it was almost stalking us. We made sure we took a long break and drove into the city of Zaragoza.
It was clean and green and very family orientated. We parked our car at a car station (something else I noticed, street parking in Spain is near impossible, so you always have to park in a parking station) and walked over to a nearby cafe. We ordered some empanadillos, which are a tinier version of an empanada (a South American pastry, which you fill with cheese, meat, seafood or vegetables) to start with and then Daniel ordered a vegetable paella and I had some creamy pasta. We originally thought we'd stay a night hear in Zaragoza when we drove back to Madrid, but after seeing it, the town seems abit 'sleepy' for us, so right there, on the spot, we decided, we would either stay in Barcelona an extra night or drive home earlier to Madrid. We didn't stay long in Zaragoza and as soon as we finished our meals, we continued back on the road. 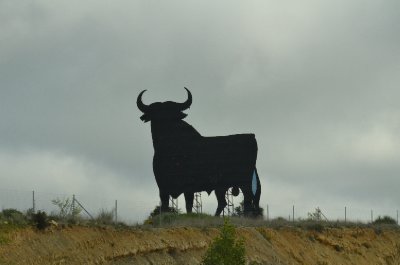 The bulls watching you... 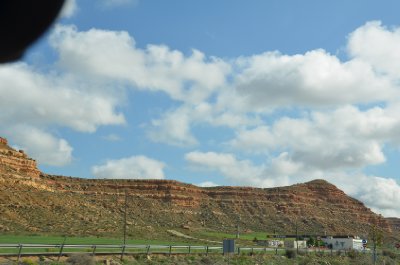 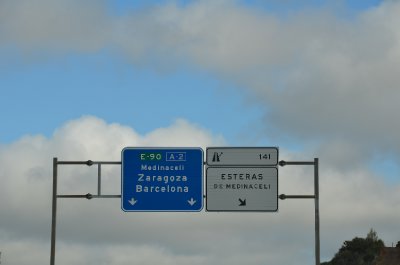 It was now late in the afternoon and we were both getting alittle tired. We were still jetlagged and hadn't stopped since landing in Spain. It was all Go, Go, Go- this was definately not a relaxing holiday. We made a few stops along the way and although I didn't have to drive, I had a go. I wanted to help Daniel split the driving time, but I'd only driven on the other side once in Vegas, but this time it was different. We were driving a manual car. I can drive a manual car- I own a manual! but the gear stick was on my right side now, so it was hard for me to get used to it. And I really didn't feel like causing an accident. I drove from a toll gate to the next and then Daniel took over. I really appreciate everything he does. Nothing is ever a problem and everything has a solution with him. Love you!!! x 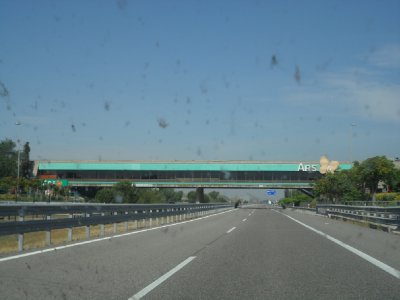 Its a Freeway Hotel that bridges over the road, sooo cool!!! 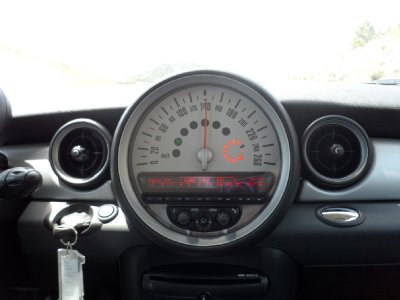 The giant speed meter in the mini

We soon started seeing the signs to Barcelona and could feel we were close. We could see the Port of Barcelona sign and we knew we'd made it. It took a castle, stalking bulls, rest stops, getting lost, but 10 hours later, we were rolling into Barcelona, like we owned the joint.
The Avinguda Diagonal is a long stretch of road that, that leads you to the centre of the city. We had to take a few rights turns- First into the Plaza de Joan Carles 1. From there, we had to take a slight right into Carrer de Les Magdalenes and around the corner, would be our hotel La Catalonia Catedral.

We had abit of difficulty finding it as we couldn't see the street names, and the majority of the streets were one way. We stopped at a parking station not far from the hotel (at the time, we didn't know how close we were) and attendant helped us out with the directions. After hours and hours of sitting in a car, it was nice to come home to a hotel room. We settled in and had a lay down, before venturing out. Las Ramblas was waiting for us!

Day 4- Road trip from Madrid to Barcelona!!! remains copyright of the author Two Otters, a member of the travel community Travellerspoint.