Skip to main content
S.Korea suddenly turned into "Land of Morning Virus'. Since the first Corona 19 case on Jan 20, it took nearly a month to reach 51 cases until Feb 18. The cases then doubled in one day to 104, with the first death on Feb 19, and have been increasing exponentially with 3,150 cases and 17 fatalities as of Feb 29. Nearly 85% of the cases centered around Daegu, 323km(201mi) Southeast of Seoul, that have 5.4 million people with high concentration of large auto suppliers. No auto suppliers have been shutdown yet because of the virus, but Hyundai had to stop its No.2 plant in Ulsan that produce Santafe, Pallisade and Genesis G80 SUV because of one paint shop employee with virus. Over 71 countries have placed either total ban or some control of Koreans entering their countries. President Moon Jae-in is under fire for his premature Feb 13 "Corona will soon end" comment, and he and his wife's loud laughter in a lunch with Parasite team on Feb 21 despite the news of virus hike. Imagine George and Laura Bush were all in smiles at a gala dinner on Sep 11, 2001. 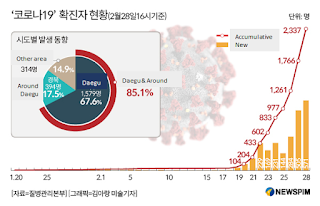 The WHO called the virus Corona, hopefully not to anger Mexican boozers, and medically termed it COVID-19. Had the WHO known S.Korea would become such a hotbed for the virus, it would have used 18, instead of 19. Use caution with 18 as its Korean pronunciation, "Shippal", sounds exactly the same as a Korean bad word with the intensity between "f**k' and "s**t ". No joke as a frustrated Korean newspaper actually put it Corona 18, whether by mistake or on purpose. 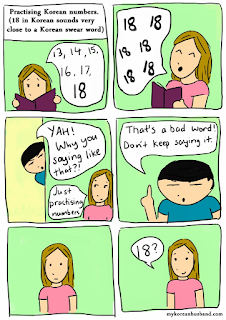