On  December 4, a group of four men ranging from 30 to 66 years old began a pilgrimage from the southeast Korean city of Gyeongju to the city of Pyeongtaek more than 400 kilometers away near the western coast just south of Seoul. Four years in the making, the journey is an attempt to retrace the path of Wonhyo, an eclectic Buddhist monk and wayfarer during the 7th century who set out on his own pilgrimage to China but abandoned it near present-day Incheon after experiencing an epiphany of sorts (he allegedly drank maggot-filled water from a broken skull in the dark of night which caused vomiting followed by a vision). Wonhyo’s realization that the refuge he’d sought during a storm had been a tomb and the gourd he’d seen, a skull, led him to develop the philosophy Ekayana which asserts that all things in the universe are connected and that the inner journey is essential. He returned to spread the revelation.

The idea first came about in 2007 when Tony MacGregor, then a reporter for the Korea Times and a regular visitor to the International Zen Center at Hwagye Temple in Seoul, came across Wonhyo’s story. MacGregor, now 66, wanted to thank Koreans and honor Wonhyo but wasn’t sure how.

Tony MacGregor inspecting part of the trail in preparation for the pilgrimage.

Interestingly, a friend of MacGregor’s, David Mason, 53, a professor at Kyung Hee University in Seoul, had a long history with the mountains and trails of Korea during his 27 years in country, editing and publishing books on the land. When MacGregor suggested a possible retracing of the Wonhyo’s journey, Mason went to the maps to see what the path might look like and, over the years, came up with the possible itinerary, which includes eight Buddhist temples associated with Wonhyo where the group will stop for the night. The journey is expected to take about two weeks

Before leaving Korea for Thailand where he’s been studying for an MA in Buddhist Studies at a university in Bangkok for the past three years, MacGregor proposed the idea to three men he’d worked with at the Korea Times: Christopher McCarthy, 30, a PhD candidate in California and explorer who’s been from Africa to Siberia; Simon Phillips, 35, a journalist and explorer who visited the Himalayas at age 18 and went on to study Buddhism; and David Watermeyer, 53, a professor at Dongguk University and an explorer who’s been on previous pilgrimages. All three expressed a desire to take on a journey related to not only discovering a new path but also exploring the ones inside themselves much like Wonhyo. Now, four years later, with the journey just beginning, the pilgrims provide some insight into the trip.

1. What specific event would you say inspired you to be someone who would embrace this journey?

David Watermeyer: I would say my experience of walking the Camino de Santiago in Spain. I found that just walking along a route with others who demand nothing from one, yet are walking along as well, is very inspiring.

Simon Phillips: A month walking in a remote part of Western Nepal when I was eighteen—the sense of being away from everyday life, and the insights this allowed, both from encounters with the people, places, and nature.

Parts of the journey will take the pilgrims through villages and towns and on to temples where they'll stay for the night.

Tony Macgregor: I have always dabbled in creative writing including short stories. In fact a couple of my short stories (River Weed on the Canal and Presence in the Pool) were printed by 3M. I was familiar with Geoffrey Chaucer’s Canterbury Tales. It was written in the 14th Century in Middle English and was the first major literary work in English. It is a collection of stories—bawdy, humorous, knightly, saintly and irreverent—that a group of pilgrims tell each other as they journey from Southwark to Canterbury on horseback to honor the bones of a Christian saint, Thomas a Becket. The stories are still popular and well-read 600 years after the death of Chaucer. I thought it would be a wonderful thing if we could write a modern, 21st Century version of the Canterbury Tales that would still be read 600 years from now.

2. Can you briefly outline what contribution you intend to make before, during and after the journey?

Tony MacGregor: The objectives of this exploratory pilgrimage are fivefold:
(1) To look within and seek self understanding as we blaze the trail
(2) To keep a record of our feelings and experiences on the trail
(3) To produce a book about the first Wonhyo pilgrimage, including a trail guide and Wonhyo Tales, a 21st century version of the Canturbury Tales
(4) See whether the trail David laid out needs modifications

3. What gear will you be bringing and what’s the approximate weight of
your pack?

Simon Phillips: We’ll be bringing minimal gear; as it is winter, we will be seeking refuge indoors at night. Therefore, water bottles, food enough for the day —purchased as we go—warm clothing and First Aid kit.

Extras for documenting the trail: ZoomH4n audio, Garmin GPS, Lumix camera/video, mp3 player, notepad and pen and books including Wonhyo’s works and the Canterbury Tales. Total weight should be below 15kg each pilgrim.

Tony MacGregor: I think every day will be different. This whole pilgrimage has been very spontaneous and I think we’ll remain that way on the trail. If something interests us, we’ll linger and explore. We won’t make it into an endurance competition but keep it light and happy and uplifting.

5. Will you be disconnecting for the hiking (abandoning all electronic devices that connect to the world)? Please explain briefly.

Simon Phillips: This is a good question. If I was walking this trail for my own benefit, I would most certainly disconnect from all devices. This allows one to be more internal and associated with the world directly around him. However, as this is a trail which we are documenting for the benefit of other people to walk, there is a necessity for us to be in contact with the world. We will be communicating with people as we go so they can update our progress, and also to our blog—www.inthefootstepsofwonhyo.com. A GPS unit will keep us connected to satellites. We’ll also have mobile phones and Internet for access to media and friends. However, I urge others to disconnect in the future, as I feel this allows one to energize more and get away from the modern world to a greater extent.

6. Do you have any concerns about the journey? If so, what are they?

David Watermeyer: Well I guess my main concern is that we can complete it safely. I am also hoping that it will be well received by Koreans as it was indeed Tony’s idea to give something back to Korea—a kind of token of respect. Unfortunately things tend to get politicized with various groups wanting to push forward their agendas. I would say: “come on guys this is something beautiful and wholesome. It’s about being human. It’s about leaving all those labels behind and stepping into wider expanses.” 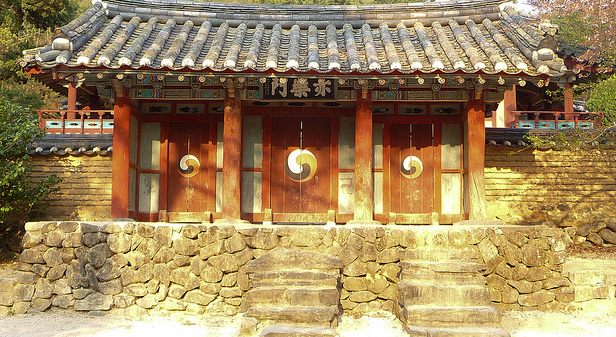 One of the temples the pilgrims will visit along the trail.

Simon Phillips: That I will compromise a life of stability, but I accept who I am. I am an explorer.

Tony Macgregor: My biggest concern is that I won’t be able to keep up with Chris and Simon. They are in their mid 30s, experienced hikers and are in pretty good shape physically. I’m 66 and of late have indulged in too many Thai curries and Chocolate mint ice creams. I’m not in good shape physically. I hope my body can meet the challenge. Also, I’m not a good navigator so I’ll be putting my trust in Chris and Simon. I’m also a little worried that we’ve put too many demands on ourselves and will lose the fun, spontaneous spirit that has characterized the pilgrimage so far.

7. Could you offer a bit of Buddhist insight regarding this journey and how the idea came to you?

Tony Macgregor: All of the pilgrims have Buddhist or Buddhist-like beliefs. I have been studying for an MA degree in Buddhist Studies at Mahachulalongkornrajavidyalaya in Bangkok for the past three years. All of the major religions—Islam, Christianity, Judaism, Hinduism, Buddhism— have pilgrimages of various types. But it was perhaps in Christian Europe that the idea developed that the pilgrimage itself—the journey itself rather than the destination—could result in a spiritual awakening or deepen self-understanding. That’s what we’re hoping for in the Wonhyo Pilgrimage—that the journey across the Korean Peninsula will bring us closer to self-understanding.

The idea developed in 2007. I don’t remember the exact date or time, but it came as a result of my study of Korean Buddhism in large part because of my attendance at the International Zen Center at Hwagyesa Temple in Seoul. The idea of writing a 21st Century version of the Canterbury Tales developed because of my interest in literature and knowledge of the Canterbury Tales. Perhaps more than other major religions, Buddhist teachings are entwined in the concepts of sickness and health. One of the four signs that the Buddha encountered that set him off on his search for enlightenment was a sick man. During his search for enlightenment, he almost starved himself to death through devotion to ascetic practices, which brought home to him the need for a healthy body in order reach enlightenment. On the pilgrimage we will be getting to know our bodies and perhaps learning something of the truth that the Buddha spoke of in the Rohitassa Sutta of the Samyutta Nikaya: “In this very one-fathom long body, along with its perceptions and thoughts, I proclaim to the world, the origin of the world, the cessation of the world, and the Path leading to the cessation of the world.”

*3WM will be following the pilgrims as they trek across the peninsula and expects to run an update on the progress of the journey.