We managed to get two tickets to the ever popular, yet controversial bullfights. We bought our tickets online through the galicia.com website as the month of May was the start of the bull fighting festivals and we had to get in early. The process of buying them over the internet was smooth and we opted to pick up the tickets from the ticketing office.

We woke up on the morning of the bull fight to the sound of rain. This was not good. I didn't know what this meant. Would it be cancelled? Is it one of those events that goes on whether it rains, hails or shines???

We caught a cab en La Gran Via and headed to La Plaza de Toros. The ticketing office would open between the hours of 10am and 1pm for customers that wished to pick up their tickets. We had the option of having them delivered to our hotel, but because the office was so close to where we were staying and I was worried they may get lost in the mail, I preferred that we picked them up.

We got to the Plaza early and they still hadn't opened, so with the rain now pouring on us and not having any umbrellas or having anywhere nearby to buy one, the shops open at 10am remember.... we found refuge in a cafe and ordered two cafes y bocadillos. I remember the waiter was really... I can't find a word to describe him. He wasn't rude or even arrogant. He was just quite straight to the point and fast!!! We had around 30 minutes for the office to open so we kept ordering coffees and orange juice so that he didn't kick us out into the rain!!! hahaha.

We decided we'd spent enough time at the cafe and the rain had sort of stopped so we figured we'd make a run for it. We were probably a 5 minute walk away from the Plaza but because of the rain, we ran down into the metro station and opted to catch the next metro to the Plaza de Toros. It only cost ?1, so it was cheap enough and we didn't get any wetter.

I pulled out my receipt and passport as proof of purchase and proceeded to the first available window. I showed the lady my paperwork and she told me I had to go around the corner and print out the cardboard tickets from a blue machine. So we turned around and went looking for this machine. We went half way around and couldn't find it. As we walked back to the sales window, Daniel spotted the blue machine and I had to type in the registry code. Finally!!! I punched in the numbers..... and they got rejected!!! By now I was somewhat..... annoyed. I went back to the sales window and told her what the hell is the go with the machine. She took my paperwork, looked at it and told me I was at the wrong place. I wasn't meant to pick up the tickets from here. I was meant to get them from the Galicio ticketing office because I bought them from there. So all this standing in the rain and jumping from metro to metro was my fault. I read the instructions wrong and I could only get shitty at myself. *Grrrrrrr* Before we left I asked the girl if she knew what would happen if the weather kept up like this. She told us if it kept raining and the bullfighters deemed it unsuitable to fight, then it would be called off and our money would be refunded. The only problem was, they would announce it at 7pm, which would be the start of the bullfighting and so we had to be there to hear the announcement. Double *Grrrrr*

By this stage I was so over it. I couldn't care less about the tickets anymore. I was over running around in the rain and I wasn't entirely over my jetlag, so I was just grouchy. I just wanted to go home and snuggle.... or have our tickets. Either way, we jumped back in a cab and headed to Plaza Del Carmen, where the Galicio office was located. Daniel gave me a hug and a kiss and told my not to be a moopey monster anymore and everything would get sorted out. And he was right. We managed to collect our tickets with no problems and could only hope the rain would ease...or stop completely. 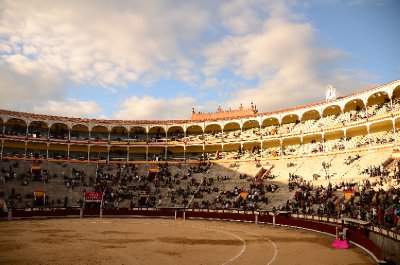 The ring at 8pm- It's still daylight lol

Now. I am not one for animal cruelty and I know alot of people that know me, would be thinking 'oh my gosh' Tahnee, how could you go to a bull fight. Afterall, I am an animal lover, who ran her own dog grooming business and worked as a vet nurse... BUT, I do believe in tradition and this is what I set to do in all my travels. Experience the country's culture and they may include things I agree with or not. They are not my customs back home. The Spaniards have been doing this for many years and honestly, it is something I've wanted to see.

It was now the afternoon and we decided to have a siesta before heading back out to the Plaza De Toros. By now, I didn't care if we got to see the bulls or not. I was just tired from all of the mornings drama and I was happy to just go out for Paella or some churros y chocolate.
We woke up at 5pm, opened the curtains and BAM!!! the sun was shining back down on us like it was the middle of the day. The sky had completely cleared and it was safe to say the Bull Fighting was on!!!

We thought it'd be a good idea to catch a cab to the Plaza and not have to deal with the crowds and pickpockets on the metro. However, we only managed to get as far as the Plaza De Alcala because in front of us, the police had closed off the streets due to a damn PROTEST!!! Trust this to happen in Spain, eh?

The cabby driver was very nice and him and we were laughing about the dumb protesters and how they muck up everything for the everyone else. He suggested we get off and walk over to the Retiro metro station , which was the nearest one and catch the next train to Las Ventas station, which is the stop for the Plaza de Toros. With that, we paid him and crossed the protesters as we made our way to catch the metro.

We got off at Las Ventas and the station was already crowded with eager bullfighting fans. Outside the Plaza de Toros there were alot of street stalls selling souvenirs, drinks and food, so we bought some chips and spent ?8, the equivalent of $10 Australian Dollars for a 250g bag of lollies!!! You'd hope they were the best tasting lollies for that price lol 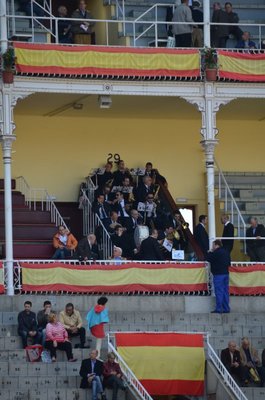 We soon got out tickets checked in and were shown to our concrete seats, in the Sol/Sombre (sun/shade) side. You could rent padded seat cushions for ?2, but we decided we would be ok with our numb bums for the next 2 hours. 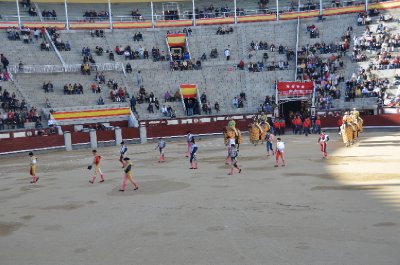 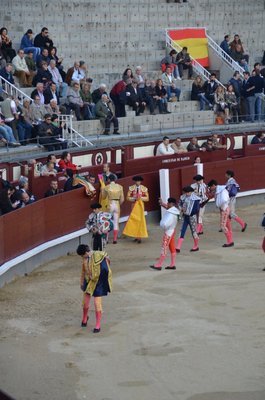 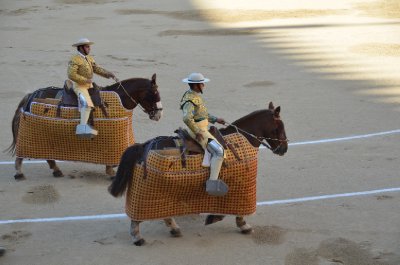 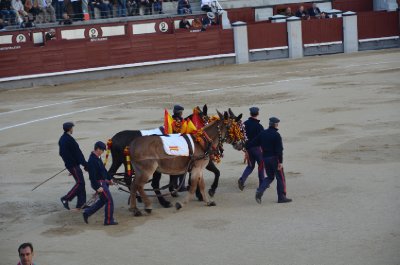 The donkeys, or burros, or burritos

7pm on the dot, the band started up and out came the horses, the honorary bull fighters and the donkeys. We watched as the bullfighters presented themselves in front of the crowd and more importantly, the judges. I really didn't know what to expect as I had never watched a bullfight before, not even on youtube, so as I stared and waited, the bull made a pounding entrance into the ring and spotted the first target. The bullfighter, or toreros, stirred the bulls up abit, swaying their targets, before the judges blew the horn and out came the armoured horse and rider. It was their job to spear the bull in the back when it rammed into the horses side. It was interesting seeing how the horses handled being attacked by the bulls horns. They were blindfolded to keep them calm and steadily balanced themselves. When the bull was speared by the rider, the toreros would then come in and distract the bull away from the horse. Once again, the judges blew the horn and out went the horses and in came another team of toreros. They teased and targeted the bull, spearing him and making him weak. On the third judges call, the main torero, or matador, finishes the bull with a sword known as the 'estoque' by spearing him right in the middle of the shoulder blades.
After the bull is no longer alive, the band starts playing again, as though to celebrate the victory of the toreros and matadores and the donkeys come out to carry the bull out of the ring. In total, there were 6 bull fights, as the toreros each have two fights. 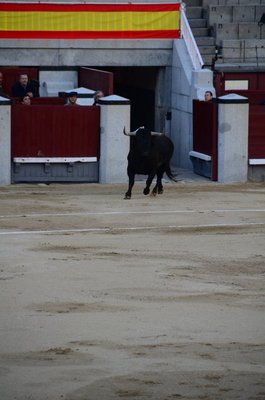 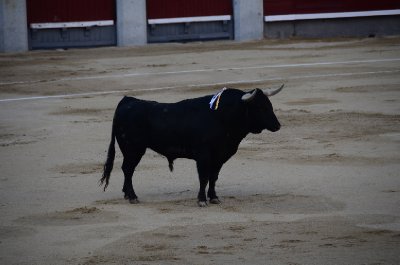 The bull about to start his fight 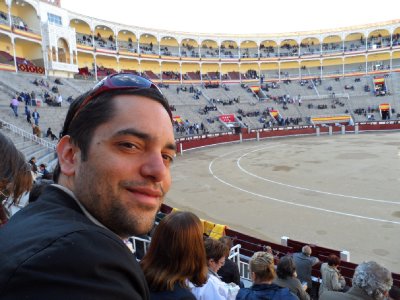 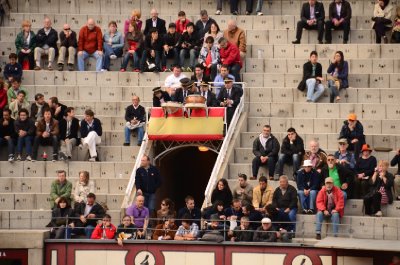 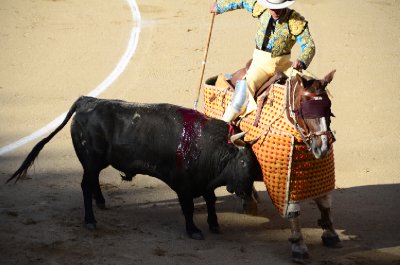 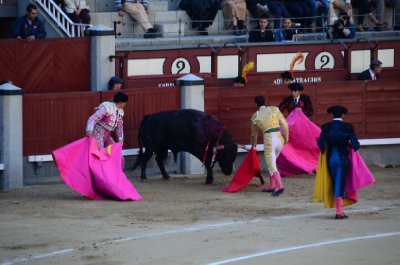 Los toreros teasing the bull on the third round 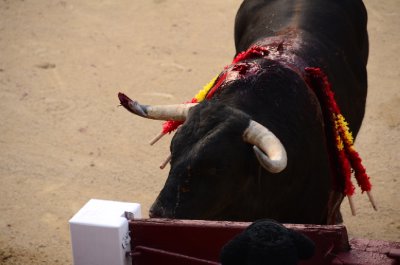 The bull in the second round 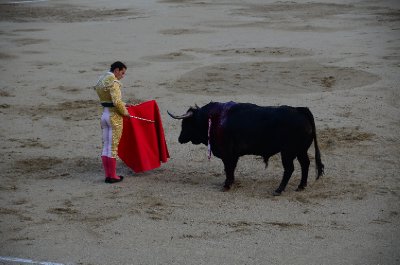 It was really interesting being there, and being witness to such an event. Never in my life did I ever think I would be there and see it. I looked around the crowd and although many were tourists, many of the locals were there with there children and it was obvious that this tradition will be a hard one to end, if it ever does. 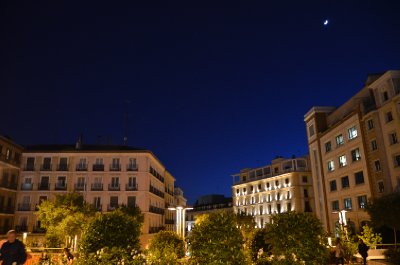 Day 3- Tickets to the Bull Fight remains copyright of the author Two Otters, a member of the travel community Travellerspoint.