We have already seen that Korean nationalists had a very personal view of history and linguistics, we'll now talk about geography. The tradition that compares Korea to a tiger seems to have emerged with Choe Nam Seon, an important figure of Korean nationalism who later collaborated with the Japanese occupant, the writer of the Korean declaration of independance, the father of Korean modern poetry and an overall very interesting figure about which I hope to talk more soon.

Korea has long used the tiger as a symbol of strength and courage (You can see it today on the uniform of the national soccer team), and has become a symbol of resistance to foreign invasions. As such depicting the pensinsula as a tiger was a way to show its attitude of resistance, and maybe also its will to reconquer lost provinces. In the first and third maps below, you can see the tiger hauling is mouth at the border with China, maybe the sign of a will to regain the Korean provinces lost to China. Note on the third map that the disputed territory of Dokdo has been resized out of scale in order to appear on the map. This, along with representing the rocks closer to the peninsula and further from Japan than they actually are, is a trick that can be seen on other maps that do not have the excuse of being an artistic representation.

In the following map you can see that the peninsula is extended to regions now part of China (such as Jiāndǎo and other Korean Autonomous Prefectures) and Russia (Maritime Siberia), which are regions believed to be inhabited by ethnic Korean and therefore which out to be part of a greater Korea. This region corresponds to territories that were part of Goguryo and also part of what used to be referred to as Manchuria, out of which Koreans are said to have emigrated in the Neolithic. On this map also, note that Dokdo was oversized in order to be represented on the map. 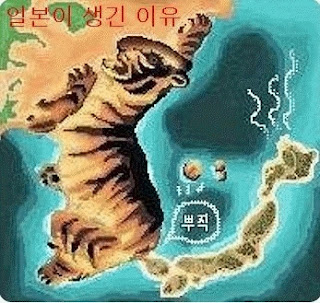 The legend reads: "The reason Japan came to the world"
As a reaction to the depiction of Korea as a Tiger in late Joseon period, the Japanese colonialists started likening the peninsula to a rabbit, which made it look a lot weaker. The idea is said to have come from the famous geographer, geologist and sismologue Bunjiro Koto (小藤 文次郎) who first established the link between faults and earthquakes in 1893. However I must say I have not found a reliable source to back up this claim. 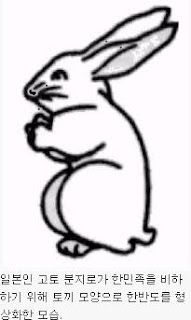 Likening the peninsula to a rabbit is still commonly done today, without any nationalist or colonialist reference, as can be seen in the following drawing executed by a 7 year old girl: 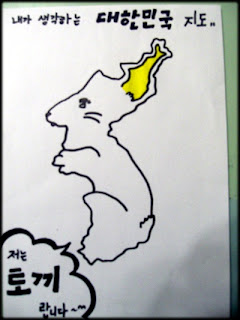 Last but not least, I don't know what this is as it came from a Chinese website, but I figured it was worth mentioning :p 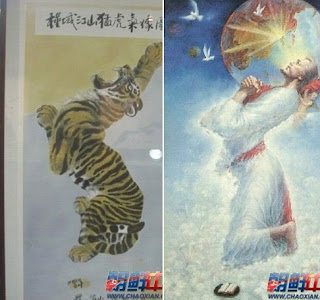