Few buildings in Korea sparks so many photographers to descend upon a rooftop like the Zenith Towers in Busan. These are one of the tallest apartment buildings in Korea and are located next to the ocean overlooking haeundae and the Gwangali Bridge. Suffice to say that the roof has a pretty impressive view.

Like all good things, it just is too good to last. Due to so many photographers hitting the rooftop there is now enhanced security. By that I mean that the security guys actually watch and do stuff. Being a seasoned rooftopper in Korea, you can usually walk by security with that “I live here” sort of attitude. However, the Zenith guys have been dealing with throngs of photographers for years and thus know how to spot one in a heartbeat.

The other night there were 7 of us and we thought that we got lucky. However, once we got through the doors, we were immediately spotted by security. We thought that we gave them the slip but they knew exactly where we were heading. Within moment of our arrival, we heard them banging on the door. Interestingly enough, they couldn’t get the door open and that extended our brief time on the famous roof a little more. “Get Out!!!” they shouted as they finally found the right door burst through counting how many of us there were.

As we gathered, begged, and discussed our plan with the young security, they calmed down and still made us leave. Overall, they were pretty nice about everything. Whenever this happens the best thing to do is be agreeable. Ask what you need to ask but never get angry or lose your temper. Many times security guards are just following orders but they can also sympathizes as you are not really doing anything too bad. Just apologize and explain your situation. You never know, they may just let you shoot. On this day, they escorted us off the roof.

We decided to head to a fellow photographer, Keith Homan‘s rooftop. Keith is a great photographer who is returning to the States in a few days. He has been an important member of the expat photography community around here and we are sad to see him go. I also wish him all the best in his next chapter of life.

The view from the roof here was great as I had not had the chance to shoot here yet. With so many roofs getting locked or covered in CCTV cameras, it was nice to just relax and shoot with some great photographers.

If you get a chance, check out Keith’s work on flickr and his site, he has some amazing shots that deserve recognition. 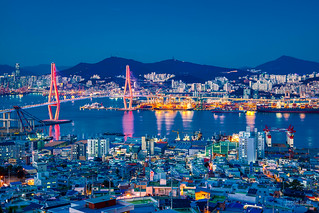