... however, the computer says it's still 6:30 a.m. EST because I have not gone online yet in South Korea for it to correct itself.

To fully understand the gravity of that statement, you need to, well, you need to be me. Or, you need to have done something, pull out early, only to one day wonder if stopping so soon was doing a disservice to yourself, if only because you knew that thing you were trying to accomplish was not the reason for your departure. South Korea was not the problem. There was no problem, per se. It was timing, I guess. It was... whatever. I could try to explain it forever, but it would still come back to what I already said: you had to be there.

You had to be me, crazed and alone, green around the gills, an itch for travel but little stomach. And then, one day, 40 days later, give it all up and go running back home. I don't beat myself up for it. It had to be done at that time. These are not self-depracating statements, only facts of a time that feels like a lifetime ago.

As we drove from the airport to our final destination for a week, Jeonju University, I had a thought as we passed by endless apartment towers, some seemingly rising from the ground with no noticeable entry point or legitimacy for their existance. As I stared through the dirty window at rice paddy after rice paddy, I did not feel the excessive awe I know I felt in 2005, that feeling of being on another world. Because, I wasn't – I was here before. If not this particular highway, if not this particular town, I have been here in South Korea. And, for a moment, I wondered if some of my feelings for this country stemmed from a period of 40 days that could never be replicated, because they were experienced by someone who had barely been beyond his home state and had suddenly been thrust upon a world that was similar enough to exist, but different enough to always be noticed at his most vulnerable. What if I could not experience those otherworldy feelings in 2010? What if it had all been created by a wild memory?

I would just have to create new memories. Starting now, in South Korea, in 2010. 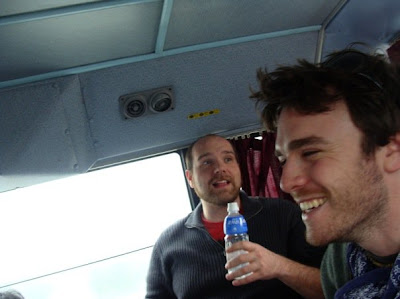 On the bus ride from Seoul/Incheon International Airport to Jeonju University, Feb. 17, 2010