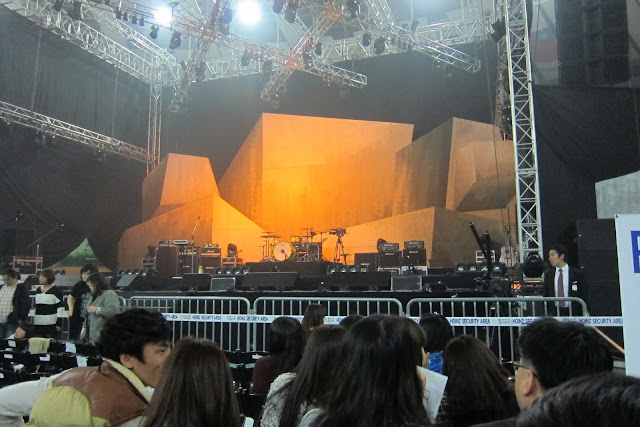 Saturday night, October 22nd, we attended a YB concert right across the street from our apartment building.  It was at the same place as the Kim Bum Soo concert we had attended a month previous.  We had fantastic 7th row seats for YB. 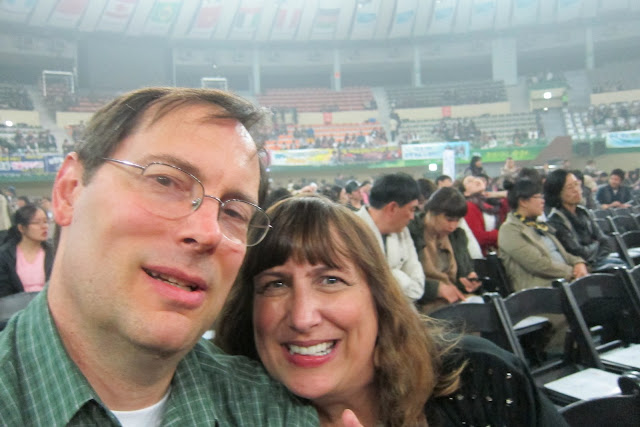 Here we are waiting for the concert to start. 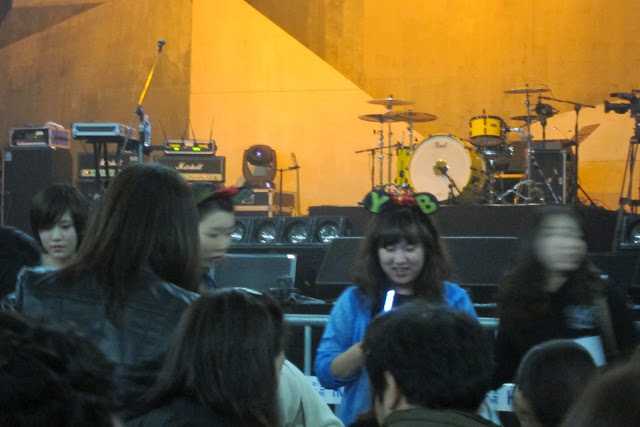 We saw three girls with Mickey Mouse ears on which they had decorated with YB.  They must be in his fan club because they had front row seats. 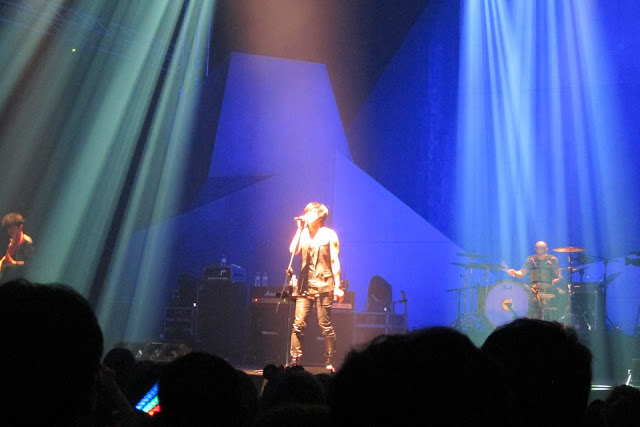 And then the concert started.  I knew YB was a rocker but I didn't know how much a rocker he was.  The audience stood immediately and we stood the entire 3 hour concert. 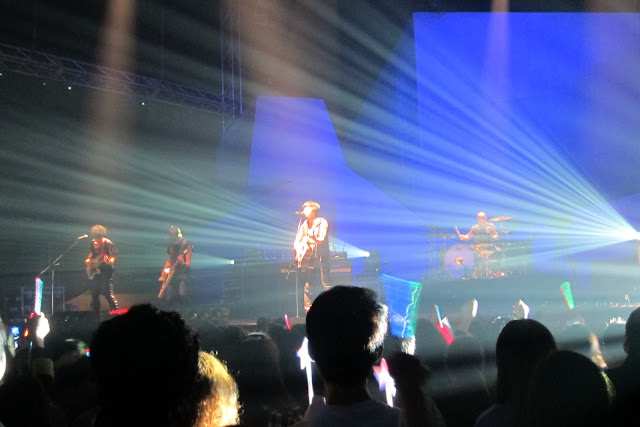 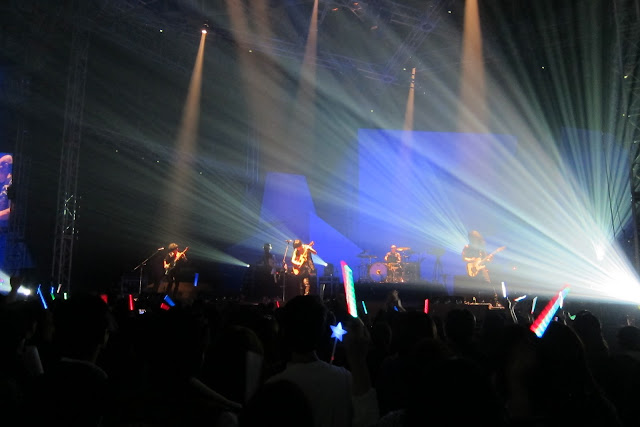 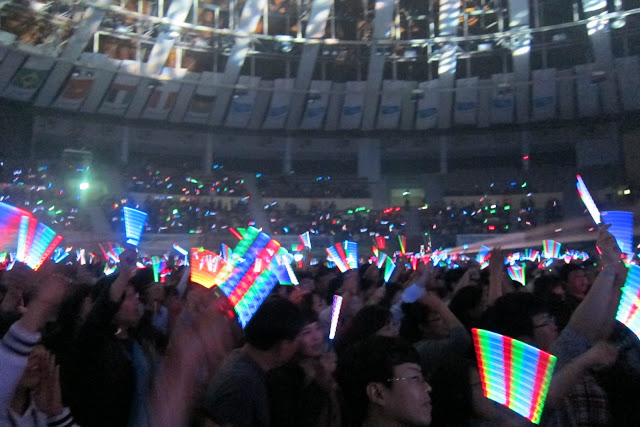 Everyone including us purchased these 2000 WON ($1.80 USD) wands and we waved them the entire concert. 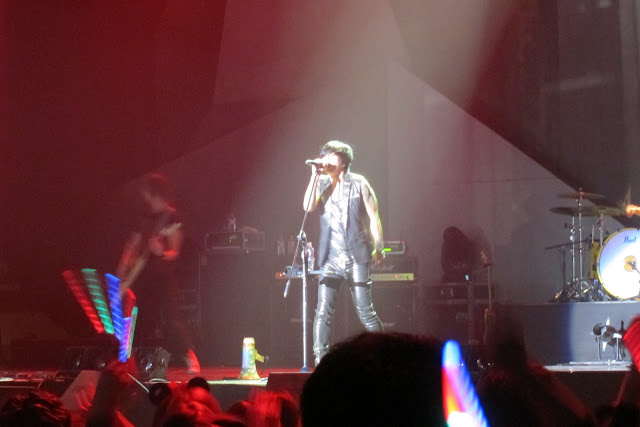 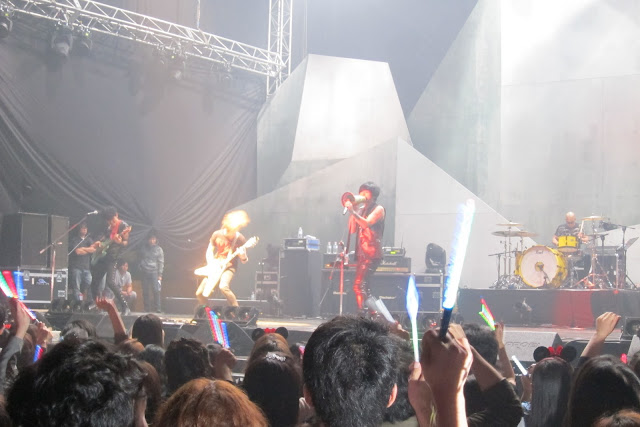 YB not only has a fantastic voice but he played piano, guitar and harmonica during the concert.  He also has a foreigner in his band.  We wondered if he was from the U.S. 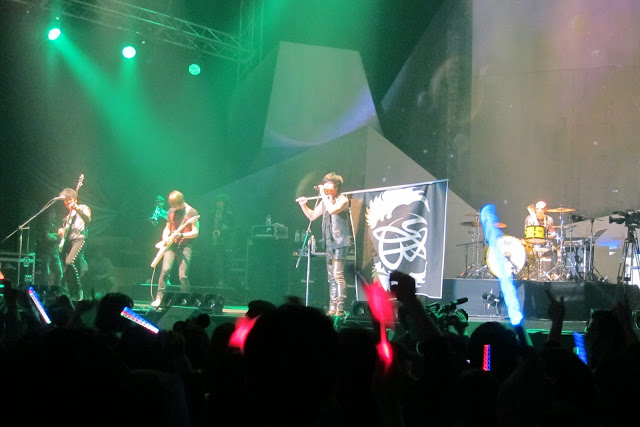 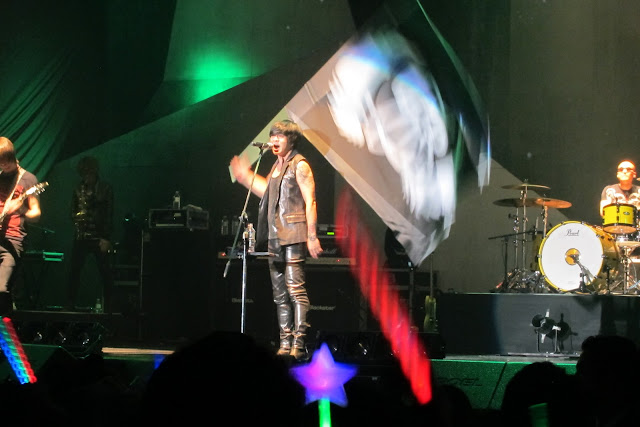 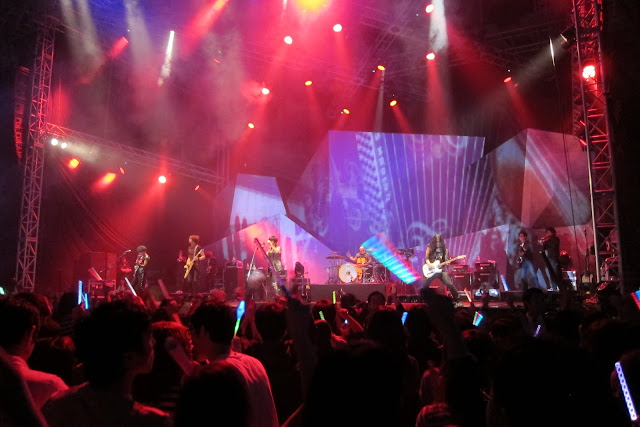 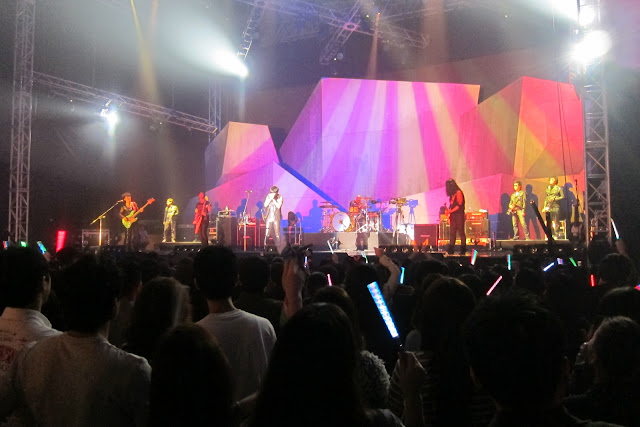 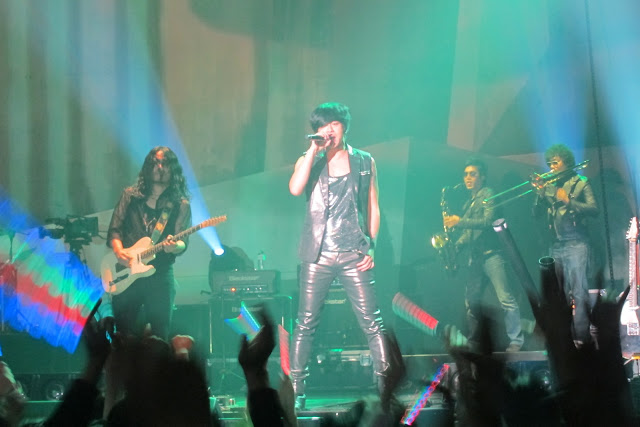 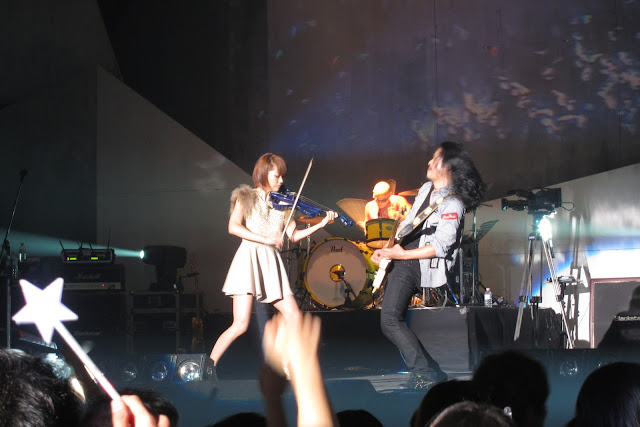 He even did a song with a violinist and she was rocking just like the rest of the band. 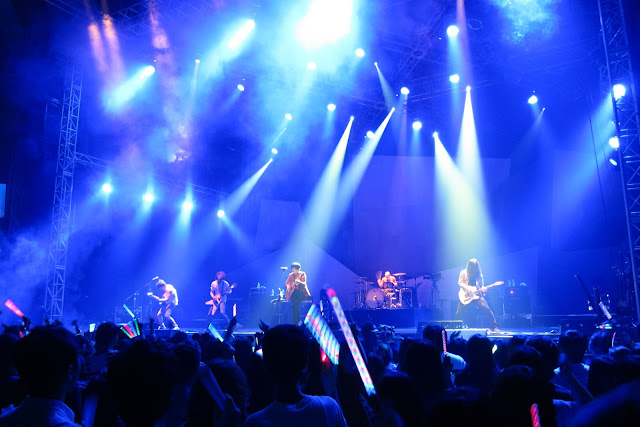 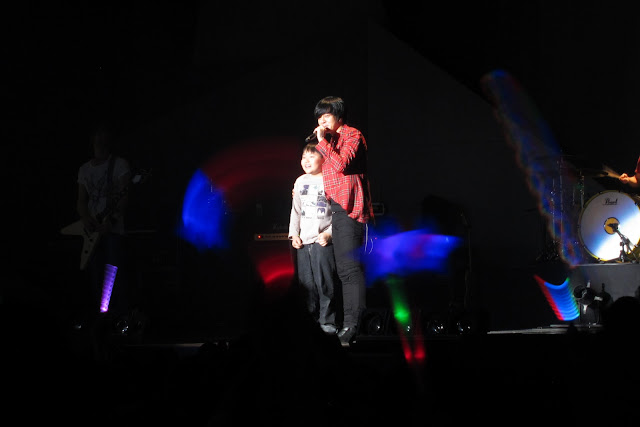 Then he ran into the front row of the audience and grabbed this little boy and brought him up onto the stage. 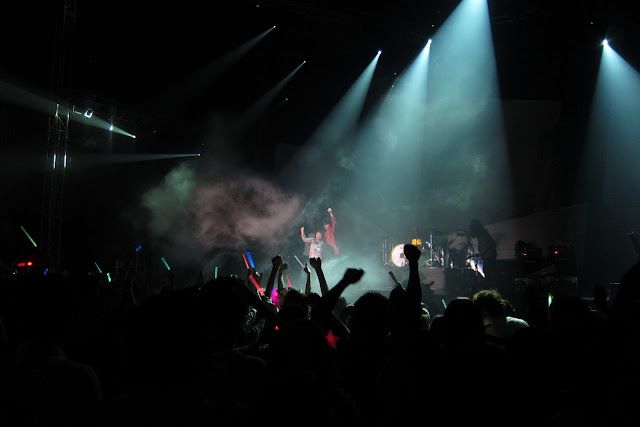 He got to dance a whole song with YB singing.  I bet it is something he will never forget. 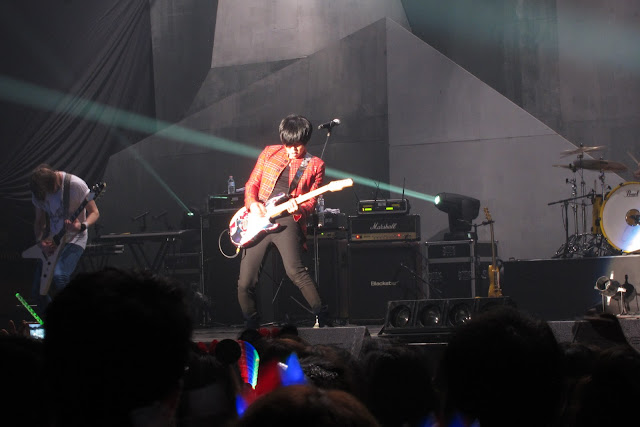 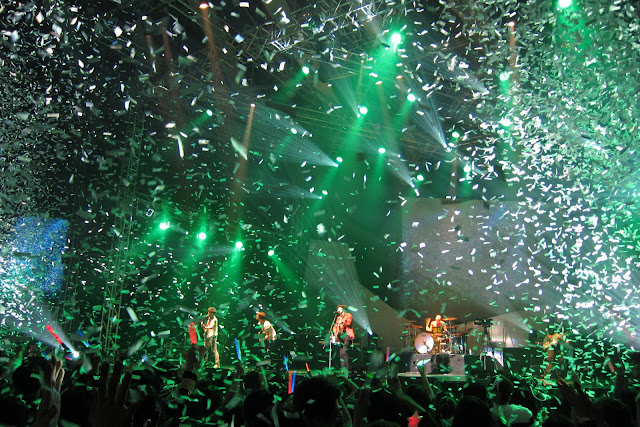 Then the confetti came and we knew that was the end of the show. 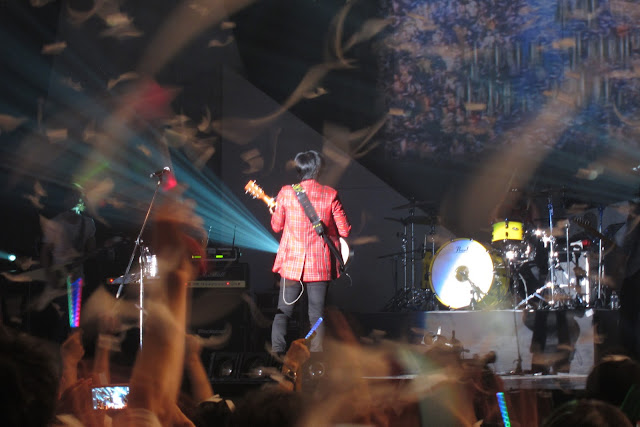 Rocketman and I could hardly hear anything but the ringing in our ears and our feet and legs were sore from jumping around.  My arm was also sore from swinging my colored light all night. But we both agree that it was the BEST concert we had ever seen.  We had both been to many, many concerts especially in the 70's and they were nothing compared to YB.  I hate to admit this but his concert was even better than my beloved, Kim Bum Soo.

They were selling CDs outside after the concert and we picked one up.  If you ever get a chance to see this guy in concert, DO IT!!!  Rock and Roll!!!  I sure wish it would come back and come back big!!!

I did video one song from the concert: