A plan to establish a sustainable trans-peninsula pilgrimage trail to honor Korea’ most beloved and controversial monk took a step forward recently as project supporters mapped out the trail, met with government officials and added partners to the project.

Some members of the Wonhyo Trail Committee spent the last week of September 2014 travelling through the mountains, meeting with abbots of temples and mapping  the trail. The trail is expected to run from Gyeongju, North Gyeongsang Province, to Wonhyo’s cave near Pyeongtaek, Gyeonggi Province.  It is planned to link into the worldwide, growing trend for pilgrimages and spiritual journeys, and to offer Korea an opportunity for local development in rural areas.

“The monks and abbots are almost universally enthusiastic about the trail,” said Tony MacGregor, a Canadian and chair of the Wonhyo Trail Committee. “It’s a question of harnessing the enthusiasm to make the trail a reality. It’s amazing that Wonhyo is still such a reality to many people more than 1,300 years after he lived.”

MacGregor said that the Wonhyo Trail Committee is growing in influence and strength with the addition of new individuals organizations, including the Seoul-based Millennium Destinations, which specializes in sustainable tourism development and promotion. He added that the committee had talked to government officials and were developing a plan to involve local governments, particularly the provinces through which the trail passes, and the Ministry of Culture, Sports  and Tourism, as well as national and international organizations interested in supporting the initiative. 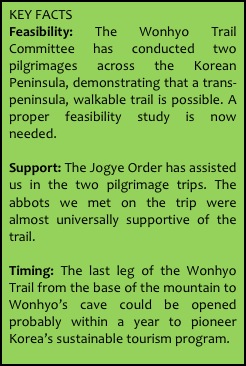 Korea’s Jogye Order is helping with the project with planning and organizing and providing accommodation for the trail planners. MacGregor said the impetus for the project, which began in 2007, came from the impression Wonhyo created on foreigners who read his works and studied him.

Wonhyo (617 – 686), an eccentric and rebel, Korea’s most beloved and controversial monk, was a great scholar with more than 80 commentaries and essays to his credit. Born into a simple family in the Silla Kingdom, Wonhyo, a monk for many years, renounced the formal religious life to teach ordinary people. He was known to beat a gourd while dancing and singing in the village streets, encouraging people to chant and recite the Buddha’s name. He called himself “ooae-Gursah” (unhindered practitioner). He is sometimes called the laughing monk. He had a son while he was a monk, generating intense controversy that continues today.

MacGregor said Wonhyo’s philosophy centered on oneness or Ekayana, the interrelatedness of everything in the universe. Legend has it that this view arose from an even that took place while he was attempting to travel to China. That event is the focus of the pilgrimage.

“He still has a tremendous appeal on a personal level as well as through his writings,” said MacGregor. “In fact, I would say his he is better known today for his actions – the stories that are told about him – than for his teachings.”

One of the stories is about his enlightenment. To reach China, Wonhyo journeyed with his friend Uisang across the Korean Peninsula to the port of Danjugye, a city no longer in existence near-present-day Incheon. Legend has it that on a dark night a storm drove Wonhyo and Uisang into a cave for shelter near Dangjugye. During the night Wonhyo was overcome with thirst and searched in the dark for something to drink. On the cave floor, he found what he thought to be a gourd filled with cool water and lifting it to his lips drank deeply from its refreshing contents. In the morning when he awoke, he looked for the vessel and was shocked.

The delicious, thirst-quenching water of the previous night was dirty rainwater swarming with maggots that had collected in a rotten skull-cap. He fell to his knees and vomited and experienced deep inner enlightenment. He realized that truth is created by the mind. 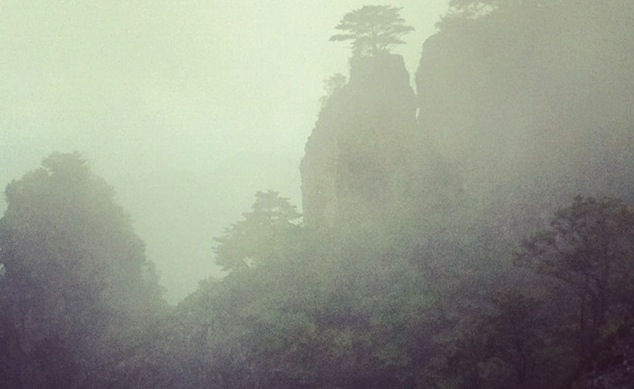 MacGregor said the Wonhyo Trail enthusiasts had made two pilgrimages. They made a film of the second pilgrimage. The ceremony at the end of the trips at Wonhyo’s cave involved drinking clean water from containers to emulate Wonhyo’s actions more than 1,300 years ago. The film can be seen at the website in the footstepsofwonhyo.com. He said the pilgrimages were the first real attempt to emulate Wonhyo’s journey in 1,300 years. “Our hope is that the trail will develop and grow into a Korean version of Spain’s famous Camino de Santiago, offering pilgrims an opportunity to explore themselves as they travel by foot across the Korean peninsula,” he said.

“Our pilgrimage took us 500 kilometers on tracks and unknown by-ways, while leading us to mountain monasteries. We spent many hours with the monks who inhabit the monasteries, talking to them about their experiences, enlightenment and true happiness. It was a unique experience and I hope many people will be able to experience it,” he said.

Tony MacGregor describes his life in Asia as like “wandering without a map.” He spent three happy years in Seoul, mostly editing at the Korea Times and Yonhap before leaving to study Buddhism at Mahachula University in Bangkok. He has spent much of his working life in journalism (columnist, newspaper and magazine editor and reporter, radio reporter, TV host).