It's been a pretty short week and not much happened.

Last night was a big night at Jacky's, we started around 6pm and didn't get home until 3am. It was a night of good food, good company and numerous games of pool.

Celso, one of our Jacky's friends, introduced me to a lady called Laney. She has been living in TEDA for over a year with her husband and they plan on staying for another 3 or 4 years. Her husband is in the steel industry. Talking to her, made me feel better about my situation here. When they first arrived in TEDA, she too, felt abit down and lonely and almost immediately wanted to go home.

We swapped numbers and email addresses and turns out we lived across the road from each other. So, we made plans to go out to Tanggu on Monday, where she will show me where all the great shopping markets are. I got really excited about that and looked forward to our date. I was eager to find the shopping district in TEDA, because where I live, there's no fashionable clothing or shoes stores. There's a few just below TESCO, which is across the street from our hotel, but they are not that great for finding bargains.

Although we had a big night and not much sleep, we managed to get up around 10.30am. We headed over to SPR Coffee, for a light breakfast and much needed caffeine. As we left, we bumped in Celso and Graham, who were also having breakfast. We didn't stay long, as we planned to go see abit of the city of Tianjin as Sundays are the only day we get to spend all day together.

We caught a cab into the city, which took a good hour. We previously had the hotel reception write for us Tianjin Centre. This is the main shopping district. We also wanted to visit the Italian Style Street, as we've heard great things about it and again, it's a major tourist attraction.

They were right about the shopping. There were department stores, small stores and street stalls everywhere!!! Also because it was Sunday, the mass of people was incredible. The noise, the hustle and bustle.... it was unbelievable.

Walking along the promenade, I stopped in my tracks, grabbed Daniel by the arm and gasped. There standing in front of my was my all time favour store... H&M. I never thought I would find it here!!! I was so happy. It was time to update my winter wardrobe yet again LOL.

I bought a few items and so did Daniel. I didn't want to overdo it too much, as I knew Daniel would get bored waiting around for me and also I thought it'd be better if I came alone and enjoyed the shopping experience. So in my mind, I was already planning the visit for the next few weeks tehehee...

After checking out some of the department stores, we jumped in a cab and headed to Italian Style Street. It was about 15 minutes from the centre of the city. We were welcomed by cobble stoned walkways and Italian influenced buildings and food menus. We had a good walk around and noticed that some of the stalls were styled with Halloween decorations. It's nice to see that they too get into the spirit of ghouls and monsters. 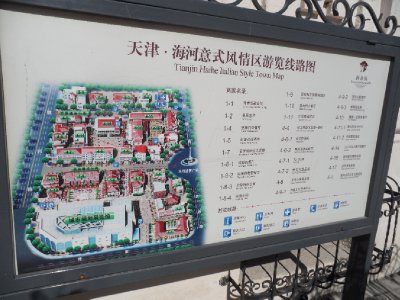 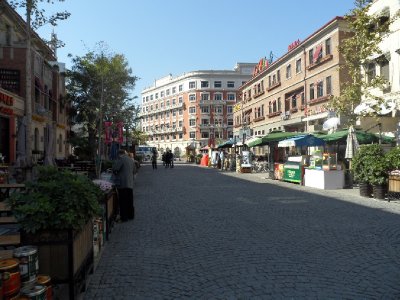 The Streets of Italy (Chinese version) 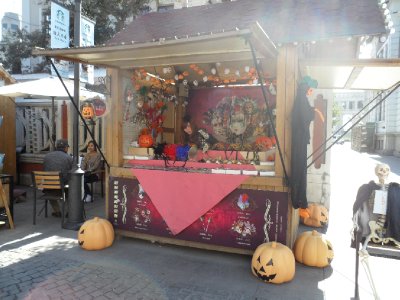 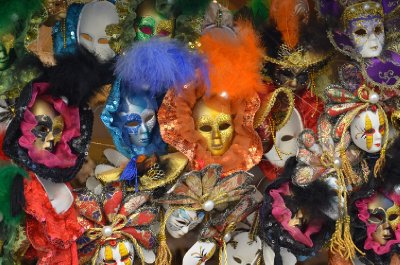 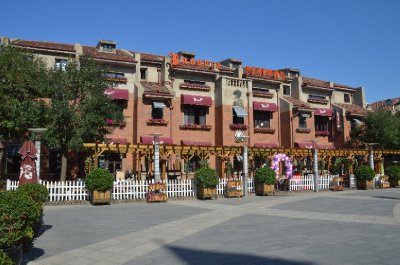 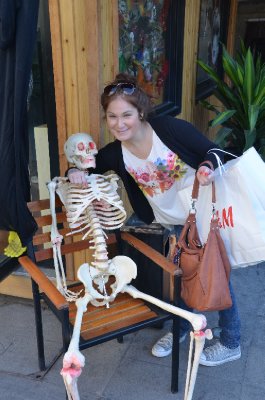 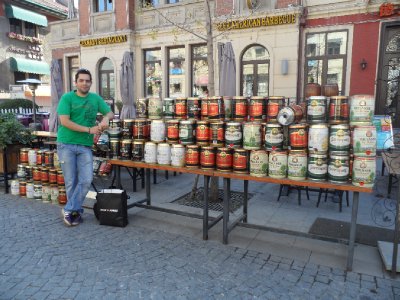 Daniel and lots of Beer!!!

It was way past lunch time, so we sat outside an Italian eatery for some pasta and cold drinks. I went for a simple spaghetti and meat balls and Daniel opted for the pasta cheese bake. Ohhhhh what a surprise we got!!! My spaghetti and meatballs resembled exactly that. However, the taste was very different. It had a peanut flavoured sauce and just didn't sit too good with me. Daniel's cheese back was two kraft single rubber cheese slices ontop of the spaghetti. Awesome. We couldn't help but laugh at our crappy lunches. 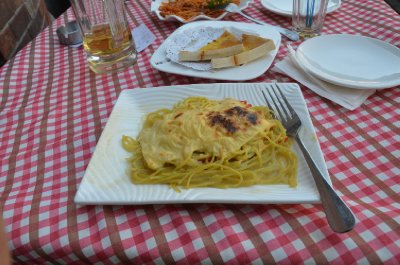 There was a stray kitten nearby, who looked so cute and hungry, I took a few photos of it, but it soon ran away, maybe to find some more peanut flavoured spaghetti. 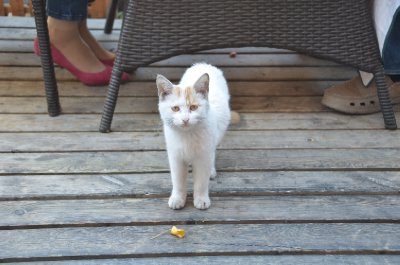 We left Tianjin around 3.30pm just in time to make it back to Jacky's to watch the footy.