Hello all–this is Part 2 of “Where Have I Been?”  (If you missed Part 1, scroll down to previous post for a quick read…) 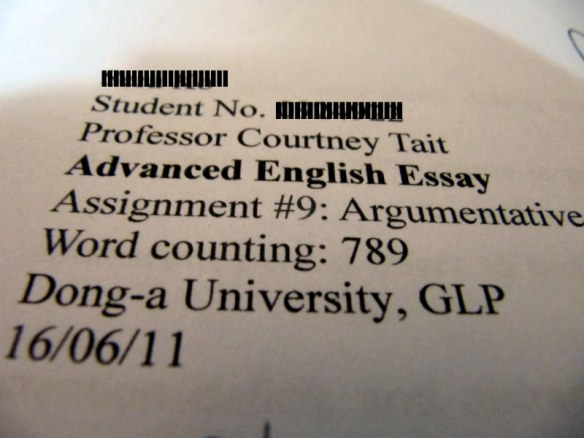 I kind of want to sum it up.

The writing class, the teaching university experience, the whole three-and-a-half months of carting essays around in my big leather shoulder bag with the worn-out strap, marking them up in green pen on subway rides or lunch breaks or in bed on Saturday mornings, circling letters that should have been capitalized, drawing arrows to potential thesis fragments buried between non-sensical phrases written in a language that attempted to be English.  On Monday and Tuesday nights I spent hours typing up google-doc slides that broke down the essay form into parts, explaining why the hook matters, what I meant by “Be specific!” how to start in the middle, if you had to, and ride your thoughts out to the beginning, how it was okay to discover a new angle halfway through, that you could circle back and re-write, why re-writing was the most important part.

The thing is, the 28 students who stared up at me from their desks on our tenth-floor classroom Wednesday nights as I asked them questions like” Why do YOU think writing matters?” and “Where do ideas come from?” weren’t writing students–their majors were disciplines like International Trade and Law and Engineering and Economics.  One student studied English Lit–a tall young man called Jingan, whose nods from the back of the room as I spoke during those first few classes gave me hope that some form of connection was occurring between the minds in front of me and the words I heard flowing from my mouth.

Two other students: Jae Hak and Junghee, who sat beside each other in the front row, participated readily; they asked questions, they offered responses.  But the others, for the first month, remained mostly silent during the hour-and-a-half lecture; breaking them into smaller groups was the only way to create real discussion.  When I asked for a show of hands at the end of the first class, in response to my “Who here enjoys writing?” an empty pause followed, and then, tentatively, one or two palms lifted into the air.

In my last post, I mentioned three things I’ve been processing from the experience: Korea and how things operate here, writing and how to teach it, and what drives me. None of these are easily summarized; to do each one justice, I’d have to back up to pre-pre-pre-war Korea, include an exploration of ancient poetry and the ongoing human attempt to convey the essence of thought and emotion through the confines of language, and some sort of nature vs. nurture meander, peppered with tidbits from my vivid and rather complicated childhood.  I’ll spare you (and myself!) the hours this would take, and instead offer a few highlights on the themes.  First up:

Korea and How Things Operate Here

The students were exhausted on Wednesday nights. They took back-to-back classes the entire afternoon, and the GLP program was taken on TOP of the courses for their majors, so they were doing double the workload of a typical Korean university student. They lacked free time and sleep.  Their class the period right before mine was “Philosophy of Science,” with no scheduled break between the two.  The pace of their curriculum left such little breathing room they were forced to squeeze their thoughts onto the page during sleepless nights during which they were also studying for exams and completing other assignments. Even if they had been writing students, and wanted to fully engage in the long and tedious process the craft requires,  the program , and the university structure, didn’t allow for it.  What mattered to administration was the letter grades plugged into the system at the end of the term (more on that later)–not what kind of knowledge or insight the students actually gained.

The GLP was in its second year of operation, and had been designed by a Korean professor seemingly interested in western-style education, in which critical thought and class discussion were key components of the classes.  But, I wondered early on, wasn’t critical thinking an inherent part of all universities, western or not?  Wasn’t it…what post-secondary education was BASED on?

The students first assignment was a 400-word essay called “How the GLP is Preparing Me For My Future Career.”  This batch of papers was riddled with grammatical issues, sentence fragments, a lack of punctuation, entire passages that had been fed through some form of online Korean/English translator, and at times indecipherable syntax.  But what was made clear–stressed again and again in multiple essays–was that the students valued the program because its professors were foreign, and taught in the “western style.”

What did this mean, exactly?

A few elaborated in their papers; others spoke up when I asked in class.  The Korean education system, including that of the university, is made up of lectures in which the professors speak and the students take notes.  Period.  Students are not encouraged to ask questions, discuss the topics, offer opinions, or debate.  Tests and assignments are graded on how well a student can memorize and regurgitate the information they’ve been fed.  History isn’t deconstructed, its delivered.  In short, the population of a university, and of the elementary, middle, and high schools that precede it–the population, by extension, of the nation–hasn’t been taught to think.

I must be clear–in no way do I mean by this that Koreans aren’t intelligent; they are, by my observation, extremely so.  I mean that the education system’s failure to encourage the pursuit of individual thought and expression has, I believe, inhibited the society as a whole.  The students in my class disliked the system they’d grown up with. Some had taken semesters in Western countries overseas; others were in their second year of the GLP, so had engaged in this “other style” of teaching.  By comparing the two, they felt their life’s education up to this point was inadequate.  They wanted to go deeper.   But a life of keeping silent in the classroom, hesitating to raise your hand because you believe it makes you look incompetent, and cramming lecture notes and textbook chapters only to spew their information out on exams with no critical thought given to the material doesn’t change overnight.  The students, I realized, wanted to learn differently–they just weren’t quite sure how.

I didn’t know how to bridge the gap either.  But their desire to cross it inspired me to try. Teaching them how to write required me to back up to where the process begins–in thinking.

congratulations on figuring it out, what you describe is how they operate, in work, in school. hope you weren't in korea too long before you had that aha moment.

good luck with trying to make a difference, really. i was there a long time. 13 years. and i just don't believe they want to improve. its all just fluff. credits on a degree, words on an resume.