Itaewon:  You bring me back to my roots.

Itaewon:  I love you and hate you.

Itaewon:  As long as you’re there, I’ll keep coming back. 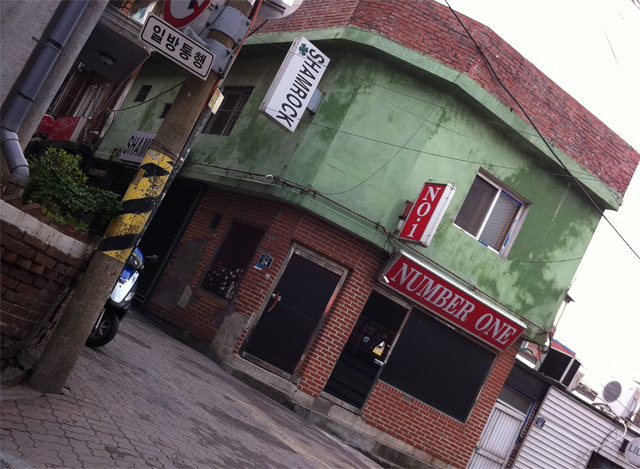 At the top of 'Hooker Hill' Sunday morning, Itaewon.

This morning’s early stroll around Itaewon started out peacefully.  I parked my car and walked up what for lack of a better name is commonly referred to as ‘Homo-Hill’, past the “Why Not?” bar and “SoHo”.  Some local heavies were cleaning out a small restaurant at the top of the hill that recently went out of business (or was ‘forced’ to close).  As they finished up, the only things remaining in the empty space were a few posters on the wall.

I rounded the bend, approached the top of ‘Hooker Hill’ and began the climb downwards.  A local working girl was standing near the front door of her bar, smoking a cigarette.  Two large Nigerian men were walking up the hill, approaching the girl’s shop and calling out to her.  She quickly ran inside and closed the door.

Further down the hill, a commotion was breaking out between three US soldiers, two West Africans and two overweight and completely drunk Korean women.  A Korean man, likely the only sober one on the hill and possibly the owner of the bar they were arguing outside of, was trying to mediate.  I couldn’t understand what the commotion was all about, however I got the feeling that the soldiers and West Africans were arguing over who was going to take the two fat girls to the short time hotel at the top of the hill.

I didn’t stick around to watch because I was carrying a large bag of money at the time.  My goal this early morning was to exchange money.  I exchange money in Itaewon because it’s convenient, provides a better rate than banks, and affords me anonymity (I don’t need to fill out any papers or show my passport to anyone).  I’ll be in Japan for the first part of the month, and China for most of the second part.  The first trip is pleasure, the second trip is business.  I was worried about my Chinese visa, as the Chinese embassy announced earlier this year that they wouldn’t be giving out visas to people who didn’t have at least 6 months remaining on their Korean alien cards.  Even though I have an F-Visa, I have to re-new it every year.  My alien card currently has only 4 months left before I need to re-new it.

I decided to apply for the visa anyway, which now costs Americans a staggering 190,000krw.  I got my passport back with my new Chinese visa one week later, no questions asked.  What isn’t widely reported is that if you “have a history” of visiting China without “causing trouble”, then the rule about alien cards won’t be applied to you.  If you’ve visited China in the last two years, you don’t need to worry about the expiration date of your Korean visa or alien card.  Those who haven’t, well, you’ll be Fedexing your passport back to your home country for the visa.

The exchange rate offered by KB bank for “Loyal Customers” was 1362 won / 100 yen as of yesterday.  The rate in Itaewon, using a street side exchange booth was 1345 KRW / 100 yen as of today.  I exchanged 6 million KRW and got roughly 446,096 Japanese yen.  Had I done it through one of my banks, I would have gotten 440,528 yen.  In other words I got an extra 5,568 yen, which is equivalent to about 75,000 KRW by simply AVOIDING the bank.  Let this be a lesson to my ESL teacher readers who have been diligently saving stacks of cash and will be making a large exchange upon departure from Korea.

Of course, you could always exchange money at Incheon airport but the rates are extortionate.  The only time you should ever exchange money at the airport is when you are FLEEING the country in an unplanned, rapid fashion, in which case you should be exchanging those stacks of KRW into something smaller and more manageable like dollars, yen or Euros (my favorite). 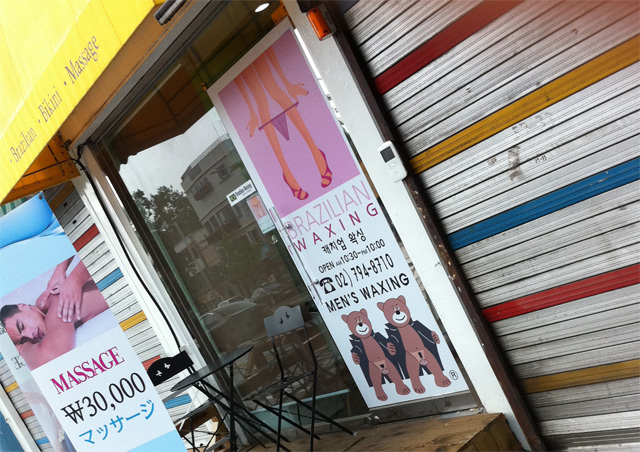 Back, Sack and Crack Waxing in Itaewon.

In my case, my bulky bag of 6 million KRW was transformed into a stack of 10,000 yen bills that could almost fit into one’s wallet.  I’ve told Korean acquaintances about my travel plans, and they’ve mostly responded with “Japan is nice, but I hate Japan!” or “You’re going to get radiation poisoning!”.  The later is a strongly held belief among ajumma circles.  Frankly, I don’t give a shit about the ajumma rumor mill or radiation scare.  Hotel prices are down, so I figured it would be a good time to get out of Korea for a bit, without traveling too far.

I notice a new shop has opened in Itaewon offering Brazilian waxes.  I think about that for a moment.  What a great business idea.  You get women coming in, paying you to do something that in most cases, you’d probably do for free.  But then I think about all the hippos and elephants who might possibly want to get their landing strips touched up too and I suddenly realize that I could never be the proprietor of a Brazilian Wax shop.  Though I have to say, if this suddenly became the new “trend” in Korea, I certainly wouldn’t be against it.

Crisp Japanese currency in hand, I make my way to “What the Book?” where I pick up a copy of Time Magazine and the New Yorker.  This is what I’ll read during my morning commute to the gym.  I briefly browse the “Travel Narrative” section but come up empty handed.  If you’ve read one “My Exciting Asia/Japan/China/Thailand/Tibet Tour” book, you’ve read them all.  I pay 21,000 won for my two magazines and then head back out into the light rain.  The Korean tailor tout who sits around outside “What the Book?” accosts me for the second time in less than 10 minutes.  Again he says “Custom made suit?  Good price!” as if he doesn’t remember asking me the same exact thing when I entered the building less than 10 minutes ago.  I guess to Koreans, we all look the same.

I make my way back towards Itaewon station, and I duck into the station itself to cross over to the Coffee Bean side of the street.  I buy my coffee and then claim a seat in the smoking section.  Though I myself am not a smoker, I find the noise level to be lower and having grown up around smokers, feel as though I’m with ‘my people’ as I sit in the smoking section thumbing through a magazine.  I also enjoy watching women smoke in public.

I finish up and head back towards Hooker Hill.  Across from the fire station, I notice that a new tattoo shop has opened, and right next door there is a new skin clinic enthusiastically offering “Tattoo Removal” service.  I wonder if they are both owned by the same person.  Most countries have tattoo shops long before they develop the need for tattoo removal clinics.  Korea seems to be getting both at the same time. 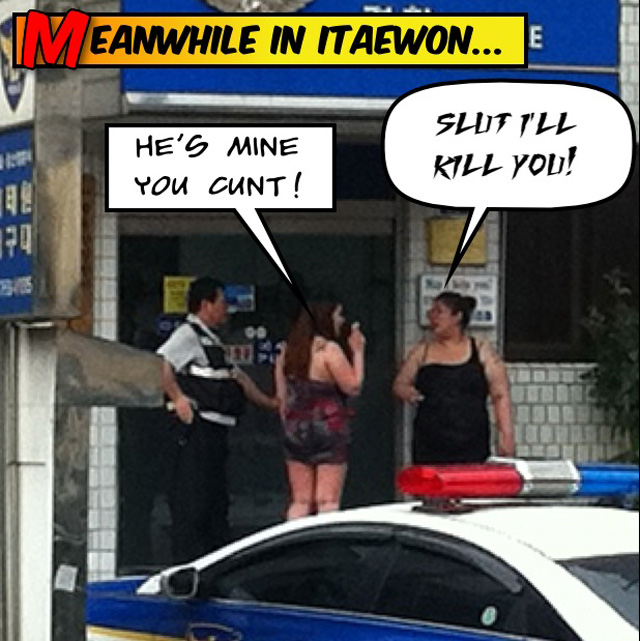 Two Itaewon Socialites waiting for their Nigerian and American Army boyfriends to be released from the police station. I didn't think the women were Korean until I heard them speaking to each other in Korean.

I glance over at the police station, where the two fat Korean girls from this morning’s altercation are now standing outside as the two Africans and three US soldiers are booked inside the station.  Whatever conflict they had was not resolved amicably and worst of all, no one will be having sex with either of the fat girls; at least not this morning.

I’d like to give the men the benefit of the doubt and assume that they were fighting over who WOULDN’T have to bed the two hippos.

American Soldiers: “No way ya’ll, we ain’t jumpin’ on them there grenades, you guys can do ‘em!”

Nigerian Men: “Ey Bradah, ey man, no way we going to take deez ghals back to ouwha place man, not every African man like dee big ghals, man!  You guys do dem!”

I get back to my car before the Sunday rush begins.  I try to make it home before the churches let out and the streets flood.  I stop by the bank and withdraw some money from an overseas account.  I’ll spend the rest of Sunday watching horrible TV shows or reading a book.

The Expat has been in Korea for eight years. He is married to a Korean woman and has no children. He used to teach English but now works outside the ESL industry. The Expat likes to bitch and moan about day to day life in Korea. Most of his writings consist of commentaries on life in Korea and being married to a Korean person. The Expat is famous for writing 3000 word posts about various aspects of life as a foreigner in Korea. Read more from The Expat at expathell.com