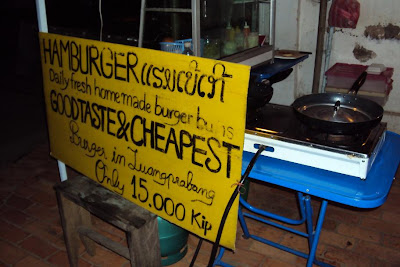 You just can't beat a good burger. There's something elemental about the combination of meat, bread and sauce that, when done properly, leaves most other meals eating dust. I know it, the Americans know it, and apparently at least one Luang Prabang street vendor knows it now too.

Since the start of our trip I've frequently run the burger gauntlet. Sometimes, such as at My Burger My, in Hanoi, this has paid off. More frequently however, my Asian burger experience has been one of disappointment and self-reproach.

Like street food, burgers are something I feel very strongly about. That's why when I spied this street burger stand at the corner of Luang Prabang's main street I was a little concerned. A bad experience here could leave me doubly wounded, and bump the town down a couple of notches in my esteem.

In the end I needn't have worried.

The burger turned out to be a decent all-rounder. The beef had a bit of a cheapo twang to it but was reasonably tasty nonetheless. Most importantly, it had been hand formed. This suggested a little thought had been put into the sandwich and instantly elevated it above the overpriced monstrosities that are the mainstay of most UK chip vans.

Re toppings, I always leave burger dressing to the pros. This particular burgermeister opted for a standard lettuce/tomato/raw onion salad. She also slapped the lower bun with a layer of mayonnaise, and squeezed a few expressionist dashes of ketchup and American mustard on the upper bun. Although a bit of the local hot sauce wouldn't have gone amiss, the classic combo gave the burger a saucy, juicy appeal that cut straight to the heart of the genre. This was burgerdom in its simplest, most unadulterated form.

The best bit about the burger, however, was the bun. It was large, soft, and speckled with sesame seeds. The bun was advertised as locally made and this freshness shone through. No-one in Asia does bread like the South East Asians, and in Lunag Prabang they've got the burger bun down.

Although by no means the best burger I've had in Asia so far, the LP street burger definitely makes the top ten. What it lacks in local flare, it makes up for in straightforward-back-to-basics charm. As such, my faith in burgers and street food remain intact, and I will continue to regard Luang Prabang as one of my favourite spots on the planet!