Editor’s note:  The following is a true story but names have been changed.

Profile of a Thief

Now Vincent is a nerd, a nice nerd, a friendly nerd but a nerd nevertheless. When he got a new phone he knew what he was doing–the processor was the best and the fastest, the screen was the brightest and it had the most memory out of any phone on the market. He didn’t even mind that it was a Motorola. When he got the phone he rooted it (“Rooting” is what nerds do to their smart phones but then cannot explain to any non-nerd what the benefits are). Vincent loved his phone, hell, he loved it so much we all loved it on his behalf. That’s why we were so upset when it was stolen. 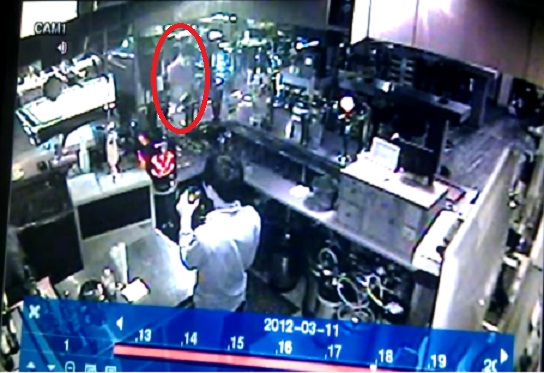 Dax at the bar before the theft.

It went missing at Zion bar–for a long time a female bartender was under suspicion. That kind of adds to the bad feeling I suppose because you feel like you have done the girl a disservice and even though no accusations were made, accusations were thought. Next time you’re in Zion, buy the bar staff a drink will ya. Because the guilty have been caught, and in a suitably dramatic way.

“Dax” is a young guy probably in his late twenties. As an E2 I’m relieved to say that he was not an English teacher. As a waygook I’m sorry to report that he was not Korean. That’s hardly a surprise I suppose–whatever the foreign community have cause to gripe about in this country, the honesty of Koreans when it comes to straight out property theft is not one of them. How many times have readers left bags and other belongings in bars overnight only to return the next day and usually find them sitting in the exact same spot?  That sense of relaxation is maybe one of the very best things this country has to offer.

But over the last year or more that sense has been, to some extent, shattered. The advice to newbies that it’s OK to leave their phone on a table in a bar has been changed to include the disclaimer “unless it’s a smart phone.” Coming from cities in Europe, North America and South Africa this was easy for many foreigners to understand because if you leave your smart phone lying around in my hometown, people will steal it on principle and the police will blame you for creating a temptation too great to resist.

Right now we can cautiously begin to relax once again–it now seems possible and anecdotally probable that one man, or possibly one group, were behind the majority of these thefts in the HBC/Kyunglidan/Itaewon triangle and perhaps beyond. 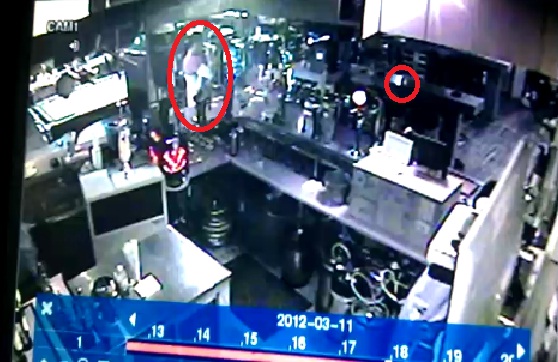 Dax eyeing the phone before his move.

Simon Beattie knew Dax from his time running “Good-Time Simon’s” dive bar in HBC. “He told me he was a model, later I found out he worked for an oil company. Dax is a liar,” said Beattie. Not a complete liar though; a couple of weeks ago Dax got talking to his pool league teammate Yoojin. She asked him what he did for a living, “Exports” came the not-totally-deceitful answer. Later that night, he stole her phone. The police reckon it was sent back to his home country to be re-sold. Like I say, not completely dishonest.

Yoojin wasn’t the first teammate he’d stolen from: nerd king Vincent was also playing alongside him and would have called him a mate. Suitably upset when his phone went missing, Vincent sought consolation from Dax. Dax was there for him, bought him a few drinks, consoled him and helped him to ring the phone company. At that time only Dax himself knew that Vincent’s phone now resided in his pocket.

Recently it seems Dax’s behavior had become more reckless and amateur criminal psychologists have waxed lyrical about how he wanted to be caught. Perhaps we can hope that’s true (it may at least suggest some kind of conscience). We can now pin nine phone thefts on Dax the week before he was caught–that’s just what we know, the number is likely far far higher. It reminds some of those amateur sleuths of the stories we hear of serial killers, aware that what they are doing is wrong, but too addicted to the thrill to stop.

What we know for a fact is that in the final week, Dax was caught in the act of stealing a phone. The men involved searched him and discovered four smart phones. The victim took back his phone at which point Dax entered bluff overdrive mode threatening to call the police if “his” phone was not returned. For reasons of their own, the men let Dax leave the bar.

The moment of capture of this young capitalist was another example of his increasing recklessness, stupidity, arrogance and cold heartedness. Playing pool in a well known Itaewon bar one Sunday afternoon, Dax found himself alone with the staff. Perhaps a symbol of his new found wealth, perhaps again, a desperate cry for help, Dax offered to play one of the bar staff, “AD” for money. Now AD is a good player, a core member of one of the most successful teams in the league, and a man more than capable of giving an opponent no shots at all; Dax is himself a decent player but even so, AD could perhaps expect to beat Dax seven or eight times out of 10.

“How much?” AD smiled. After all, playing for money in itself is not a cause for suspicion–anyone can win a pool game, and a friendly bet for a beer or 10,000 Won is not unheard of. “Six hundred thousand won,” declared Dax, as he dropped the cash on the table. AD wisely declined, but the moment of bravado had been noted. At that time of course it seemed a crazy and reckless moment of grandstanding from a man generally perceived as arrogant and aloof. Later it was reported that he was selling these phones for 2-300,000 won each and taking perhaps dozens every week. Maybe, like Scarface, his biggest problem was “what to do with all the fuckin money.” 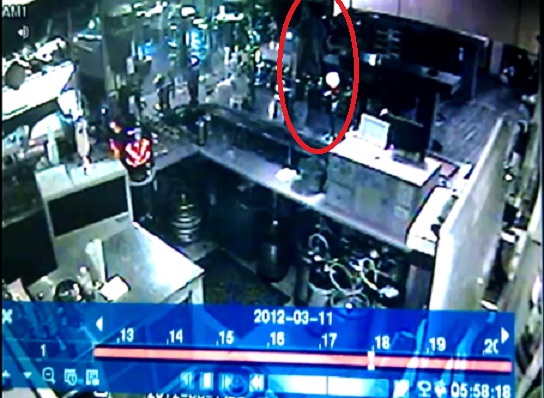 A bet-free game ensued and typical Sunday afternoon banter was exchanged. Then AD went to check his phone, but the phone had disappeared. At this point Simon Beattie, a regular, entered the bar. “I knew Dax took the phone,” Beattie told us. “As well as being a liar, I also knew he had been banned from another bar for using a credit card that had been stolen in that same bar. I knew he was a liar, I knew he was stupid, and I knew he was a thief.”

By now the eyes of suspicion were firmly on Dax and all the more so when the phone was shown to have been turned off after someone present rang it to get a possible lead on its location. Who else could the suspicions possibly have fallen upon? There were only staff and Dax in the bar when the phone went walkabout. The staff in this bar work together 12-16 hours a day, they are like brothers, never mind that they wouldn’t steal off each other, they wouldn’t have time apart enough to sell the thing. It is ludicrous to believe that it would or could have been anyone but Dax.

Dax was by now lifting his shirt to show his clearly phone-free tight jeans. “Brother,” he protested, “search me, I have nothing.”

Beattie was not convinced by this display of innocence: “It just didn’t feel right, I couldn’t put my finger on it but there was something about the way he was asking to be searched that didn’t ring true. As a friend pointed out to me later, it was probably because he had said the same words before.” We now know this to be the case; witnesses report the exact same behavior the previous Wednesday when Dax had stolen the phone from Yoojin.

“[Member of staff] MC had reported that Dax had visited the bathroom so I wondered if it was stashed–I went in there, noticed the trashcan and figured I’d check that last,” laughs Beattie. “The next place I noticed was the open window–I put my hand out onto the ledge and with a little surprise and a lot of satisfaction, I felt the phone.”

AD’s first reaction was to inflict some police-free on-the-spot justice courtesy of the bar’s “special customers only” baseball bat. MC, however, had different ideas: “I didn’t want the short term satisfaction of vigilante justice, I wanted the long-term knowledge that he was gone. I wanted his visa.”

Dax was reluctant to wait for the owner to arrive, but others were more determined that he hang around. “Brother, what do you accuse me of? I am not a thief,” he pleaded. A cool head amongst a throng of now passionate people had the solution. “Let’s watch the CCTV.” 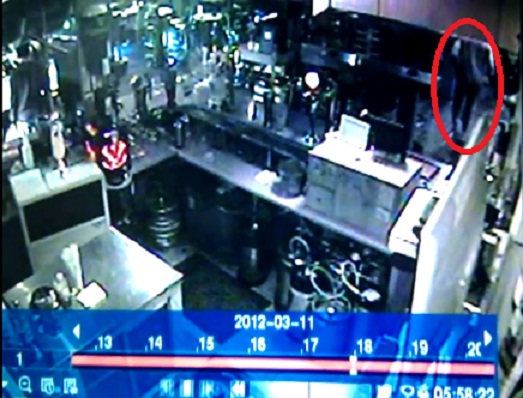 Dax on his way to the bathroom to stash the phone.

Those of you who have lost a phone can allow yourself a wry smile now at the thought of Dax’s suntanned face rapidly becoming a few degrees paler. “CCTV?” he asked, and MC kindly pointed to the cameras.

“After that he got a bit flustered,” explains Beattie. “He knew he was caught, we knew he was caught, we just had to wait until they watched the footage upstairs. There were three of us guys; me, MC and AD. He wasn’t going anywhere, but it didn’t stop him trying. He tried pushing past, but interestingly, not too hard. At one point he lost it a little and tried to pick up a heavy metal stool. He got it to about 45degrees and below his waist. I wasn’t the only one feeling like Dirty Harry at that moment–”go ahead punk, make our day.” He must have realized that it wasn’t a good plan because he put the stool down and for a while seemed to accept his fate.”

The CCTV showed of course that Dax had taken the phone and headed straight to the bathroom. The police were called and they watched the footage with Dax. By now Dax was openly crying and begging anyone who would listen to accept a bribe. The police returned him to the now half-full bar where he pleased the crowd with more tears and a futile and half-hearted escape attempt. As he was lead in to the police car people opened the windows of the bar to lean out and cheer and say goodbye.

“The last I heard he was in custody. I’m not expecting to see him again.” says Beattie. “I heard some of his friends were getting together money for his air fare.”

Although Beattie smiles at the thought he insists that he is not a vindictive man. “I’m a liberal, I stick up for the unfortunates, I’ve worked in prisons to try to help those who find themselves there. But this guy, no way. This guy didn’t have a job but splashed around 600,000 won bets. He stole off immigrants trying to build a life for their families. He stole from friends and people on the same team as him. Fuck him; he’s a piece of shit.”