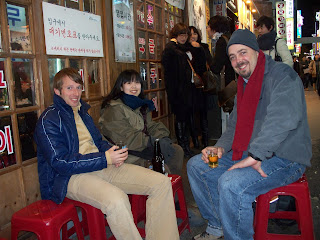 Christmas Day marks six months since I set foot in Korea on June 25th. I can't believe it. Time has certainly flown. Before I came I read, and I believe wrote about since, the stages of culture shock. I am glad I did although it didn't help much. There were times when I thought: "Ok, I have moved on to the next stage." Looking back over the time now I realize that I was always behind a little. The honeymoon lasted longer, the low period was longer and deeper, and the comfortable, homey phase is still kicking in. Going through that, somewhat thoughtfully, has been one of the best things about this. It is amazing to come fresh to a new place and make a home there. Not a literal home but a heart home.

My poor blog has been whimpering in the shadows of neglect for a couple of months. I write when I want and I haven't felt like writing down the day-to-day of the life into which I have now, officially, settled. The holiday calendar in Korea is lumpy: there are no official holidays on the calendar for over three months and so we are in the last weeks of a long slog toward Christmas vacation. This has meant little travel outside of regular trips to Daegu, and I have written about that. So subject matter has been lacking a bit.This should change as a week's vacation and a lot of three day weekends are around the corner.

When I first got here someone told me to treasure my first weeks here. The wonderful terror of that first transition is fast fleeting. I am very happy that I wrote as much as I did during that time. I didn't have to go farther than my own street for material at that point. Every trip to the corner for water seemed like an incredible adventure. Although every day still seems magical and I am constantly aware of being an alien here, my main preoccupations now have returned to what they were before I came here: friends, work, and my Sig other.
Each of these things are of course completely different from before for a variety of noteworthy reasons. Friendships here are intense and brief. You meet people and, because of the surroundings and the relative anonymity of an expat community in a city this size, feel both more willing to open up to them and at the same time free of certain social responsibilities (like a keeping in touch afterwards). And people are always coming and going. There is a sizable group of foreigners here who aren't going anywhere any time soon, but the majority of the people (especially the youngest set) are only here for a year, so close friendships bloom and fade. I have been blessed with some very wonderful friends while I have been here. I have no reason to believe this will not continue. My gregarious nature has been a great asset to me here, perhaps the greatest. People are always shocked that I will literally talk to anyone. It's a hobby.
Work here is also an utterly foreign experience. Prior to coming to Korea I was a dabbler, holding down two or three part-time jobs and playing a lot in between. There was a period when I was very unhappy with my job here and I think this was partly due to the adjustment to full-time employment. There were also times when I felt that they expected too much for what they were paying me and that they took for granted all of the extras I felt I was already putting in. All of this led me to feel dissatisfied with my position and unhappy in general. But I have now come to believe that life is a matter of perception.

The Buddhist texts that I have been reading say "You are what you think." I was obsessed with the thought that I was being exploited, ridiculed, and overworked. In addition, I reached the point of paranoia that I felt my employers were looking for a reason to get rid of me. Maybe they were, because I wouldn't have blamed them. My attitude was horrible. Then, one day, after reading about Right Livelihood, I realized that this job wasn't about me. At all. I had become a captive of my own negativity. By realizing that my own perceptions of my position were the only thing that mattered I made a choice to make this about what I could offer to others, not what they could offer to me. What they owed me and whether or not I was getting it ceased to matter at that point and my job became a source of joy to me, not an anchor. I work for the kids. And they need me. And, more importantly, I need them.
And then there is 손유진 (Yujin), the real bedrock source of joy in my life now. Being around her is like hooking myself up to a battery charger. Her laughter is a like a song that gets stuck in your head. Her smile is like the clouds parting. We have a lot of challenges to face, but I believe that in the end it will all work out. I look forward to sharing many wonderful experiences with her in the future.

There is one sad thing to report. It was with great regret that I bid farewell to my friend Tom this last week. His shipping company had invited him to work in an exchange program and his six months here were up. We met in September and enjoyed many great adventures together, including one memorable trip to Japan. I, and others here, feel his absence. He is a fine individual.