Skip to main content
Yesterday I attended a Singapore National Museum exhibition on street food. Housed in one of the museum's "Living" exhibition halls, Eating on the Streets documents the city's relationship with street food over the years. On display are several antique food stalls, as well as numerous artifacts from Singapore's colourful history of mobile catering. 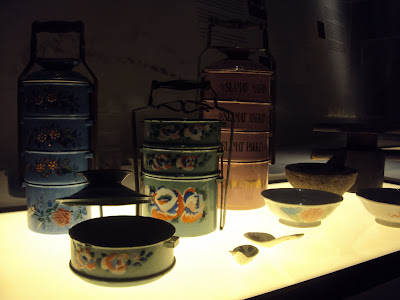 Along with accompanying video and text, these artifacts tell the stories of a dozen or so of Singapore's most famous street dishes. One of these was Roti Prata, a type of flat bread predominantly made by Singapore's Indian community, which has its etymological roots in both the Malay and Hindi languages (Roti is Malay for bread, whilst prata is a corruption of the Hindi paratha.) The flatbread, as the exhibit explained, is a unique evolution of the paratha that is only found in Singapore, and a good example of how cultural exchange and innovation has fueled the City-State's culinary growth.


Another exhibit demonstrated the advertising methods of the Tok Tok Mee sellers. The vendor's young assistant would walk through the neighbourhood beating a bamboo stick against a wooden block. Different sizes of Bamboo would make different tones, which in turn would signify the type of noodle used in the dish.


It also featured an excellent display on the various ingredients used in Singaporean cooking, explaining how they are used, and in many cases, how they got to the island in the first place. Besides getting a little training in for the identification round of masterchef goes large, I learned that nutmeg is a hallucinogen, (though eating a whole one would most likely kill you.)

The exhibition is free between 6pm - 8pm, but at all other times a 10 dollar ticket gets you into the museum's incredible history exhibit. I strongly urge anyone interested in the city's history and food to attend.