Skip to main content
My wife planned to buy her best friend a relatively expensive watch for her upcoming wedding as a special gift, but somewhere along the way it was decided that while the budget might remain the same, it would be better if 'couples' watches were purchased. I had a feeling that someone got the casting vote in that decision amongst the electorate of two.

Koreans readily embrace the 'couples' concept - which can mean having the same style of watches, wearing exactly the same style of clothes, phones and anything else which occurs as a possibility. It is some disturbingly outward sign of their homogeneity in an already dangerously homogeneous society.

We dragged ourselves to the Beomildong district of Busan, known for its concentration of homogeneous jewellery stores - which are not so much singular outlets as collections of individually rented concessions which are little differentiated from one another. And while there are individual shops, one gets the impression that the contents are the same, as perhaps are the prices - which are high. Expensive rings, bracelets and watches may be one way in which the people can assert themselves as individuals, by applying an economic filter - except all this leads to is a generic display of wealth as tired and clichéd as the thousands of Prada bags - real or faked - which travel down Nampodong's main street every day. 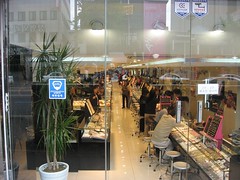 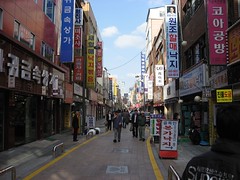 An old man eats a humble meal in the gutter in front of a sign which reads "Rolex", or he may have been scavenging someone else's leftovers, and there's something very real about that. 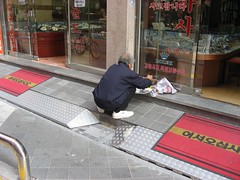 We eat a less humble meal - three chicken kebabs and one Korean rice for the Korean who only likes Korean food. He is my equal and opposite. Maybe he's different - a few years ago kebabs exploded into the cultural groupthink here and it seemed as though the hoards wanted nothing more than to eat them at every opportunity before they moved on to the next trend leaving the remnants of the old behind. It was around this time Korean Brother wanted to open up a kebab shop.

The decorators are at our friends' recently purchased apartment, and they've finished, so together we go over to check the work. It's the first time my wife and I have seen the place, but it's in an apartment block that looks the same as a thousand others. A ground floor affair in one of the least fashionable parts of the otherwise highly fashionable Haeundae-gu, it has at least the virtues of being relatively large at three bedrooms, and relatively cheap at 85,000,000 won (£43,800/$72,335). The ubiquity extends to the electrical fittings and fixtures throughout the apartment which meet the usual Korean standards, and we comment on the apartment's spaciousness, several times. It was the casting vote which had created and decorated this place, but the casting vote is rarely the end of the democratic process. 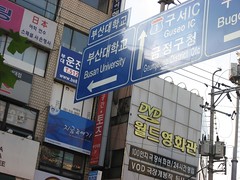 We travelled onwards to the PNU (Pusan National University) district in the north, otherwise known as Jangjeon-dong, where further jewellery stores yielded similarly disappointing results. There was a timepiece our friend really liked, but it had a round face and her husband-to-be preferred a square one, so it wasn't going to happen. How does one square such a circle? I do not know but I fear that it will be; any tool can become a hammer.

It was not cake we ate, but ice-cream before we parted from the happy couple. As we walked across a bridge into the station to catch a train home, I saw the graffiti artists at work below me and took comfort in the knowledge that the clock is ticking on an older Korea with its demands of conformity, and times are changing. 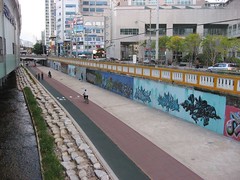 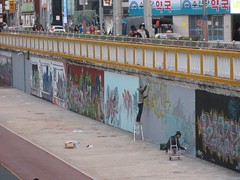 It seems we must find a watch which meets the prospective groom's requirements, and then the second one will automatically follow.

"A man with one watch always knows the time. A man with two watches is never sure." - French proverb 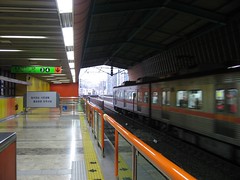