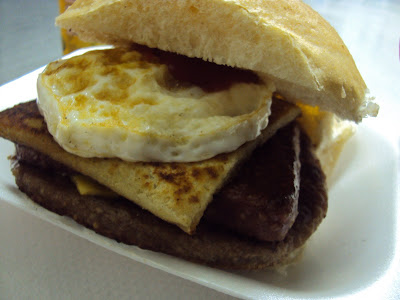 Named last year as one of Lonely Planet’s top ten cities, Glasgow is arguably Scotland’s biggest, fiercest, and most exciting city. Once considered the “second city of the British Empire,” it’s a town that has ricocheted between economic boom, decline, and back again – and still bears the scars to prove it. These days, although the city is enjoying increased tourism and growing global presence, Glasgow remains a working, drinking, fighting city. Somewhere that, as Gordon Ramsay observes, is “full of people with no other ambition but to live life.”

The Scooby Snack is a proud part of this hard-living tradition. Available only from a handful of after-hours burger vans, this monument to meat and grease means business. It’s not a novelty item or publicity stunt and you don’t get a prize for eating it. It’s simply over-indulgence in an casual, distinctly Glaswegian way. 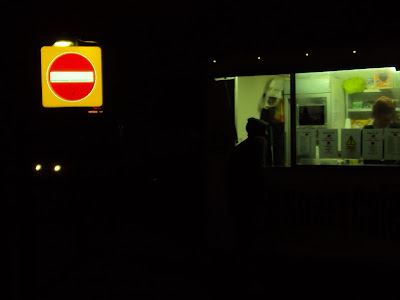 I recently grabbed one from the Street Cafe burger van on Glasgow’s Sauchiehall Street.

Fried egg, flat sausage, bacon, cheese, potato scone and a burger patty were served in a floury roll and sprayed with brown and red sauce (it’s not for nothing that Glasgow is frequently cited as being among the most unhealthiest places in Europe.) 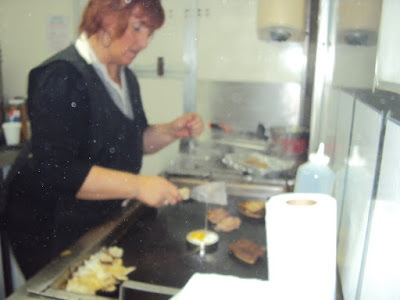 The result was a mammoth sandwich that was mostly quantity over quality. The burger was of the cheap, fast food variety that comes out of the box, the cheese was processed and the bacon pretty standard stuff. Where it did shine however was in the Lorne sausage and potato bread. Lorne sausage (also referred to as flat sausage) has a much coarser texture than regular sausage, and when cooked properly (i.e not too much) can be exceptionally juice and tender.

The Scooby Snack is no mean feat. But then again, Glasgow is no mean city.