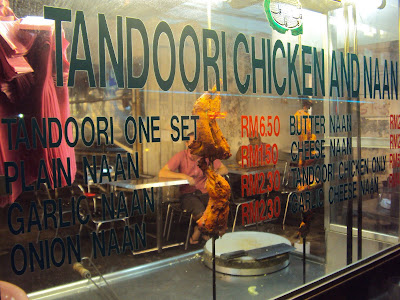 Penang, on Malaysia's west coast, is a place of diversity. The East India Company set up a trading post here in the late 1800s, and the capital Georgetown remains a relic of its colonial past. Streets with names like Campbell and Carnavarn, intersect with others such as Cintra and Chulia, mashing fading colonial splendour with functional Asian chaos. Little India, Chinatown and Malay areas further subdivide the city into swathes of varying colours, smells and sounds, making for a real assault on the senses and a unique locale.
Food here seems to be part of the fabric of the city; cultural threads that intertwine and overlap, weaving through the Chinese, Indian and Malay communities like a massive, edible rug. Even the restaurants with roofs and walls spill out onto the street, setting the pavements alight with the thrashing of woks and clanking of tandoors. Elsewhere, outdoor markets and hawker centres try to impose a little containment on the madness, and pavement vendors ply a vigourous trade on almost every corner. There's no doubt about it, Penang food is street food. 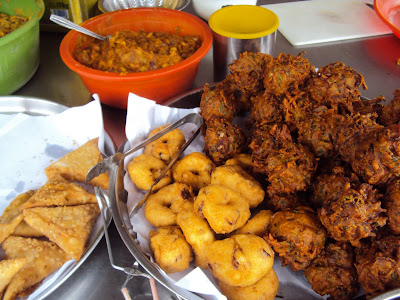 Sarah and I are curry fiends, so it's no surprise that on our first day we headed straight for Little India. Once there, we found this attractive stall packed with Indian savorys. We dug straight into some morning Samosas, still warm and bursting with a smoothly textured filling boasting plenty of potato, chickpeas, turmeric and mustard seeds.
Later, unpacified, we hit up our second Indian street vendor of the day at Sup Hameed on Penang Street. Sup Hameed is basically a line of Indian street food stalls stretched into a pavement restaurant. Between them, they put together an impressive menu that includes a wide range of conventional curries as well as delicacies such as cow's stomach soup. We opted for the Tandoori Chicken Naan and the Nasi Kandar. 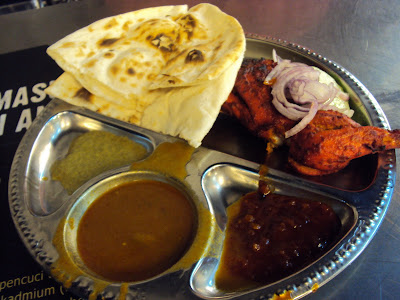 We'd gobbled a Tandoori Naan the previous night at a late night curry house near our restaurant and had been gunning for a repeat performence ever since. The Tandoori chicken consisted of leg and thigh meat, marinated and then thrust into an outdoor tandoor. Into the same oven were slapped doughy disks that cooked and expanded, bubbled and cracked to just the right degree. The result was a joyful marriage of succulent flavoursome chicken with soft fresh naan. Some sliced onions and cucumber sealed the deal. 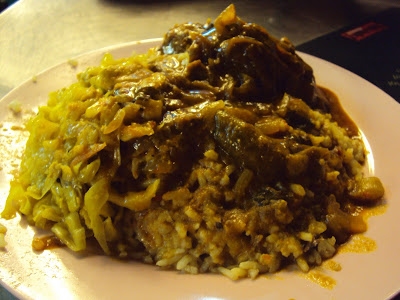 The Nasi Kandar was an Indian buffet of sorts, consisting of a plate of pilau rice onto which a selection of curries, sauces and condiments were added. The Chicken Tikka Masala I picked was a little bony for my liking, but the accompanying sauce was rich, salty and smacked of cinnamon. Some shredded cabbage with mustards seeds likewise stood out.
Fantastic, and just a fraction of what this city has to offer. Much more to come!