Skip to main content
Our little one is just over a month old now. She's with her mother in Busan, and I'm heading down there every second weekend to visit. The past month has been a rainstorm of activity with KTX bookings, diaper changes and all manner of things in between. 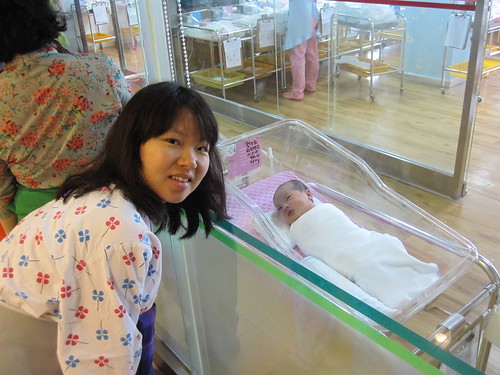 Things are going fine now, with a lot of support received from friends and family. Heather is seeming comfortable and is an excellent mother. The birth itself though, was a stressful event.
This is the story of how it all happened. 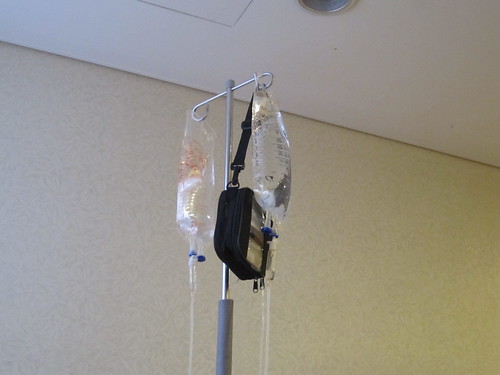 We entered the Areum Women's Hospital on Monday the 23rd of May at 10pm. The ETA was actually May 20th, but we wanted to wait for a natural birth if possible. By that time our little one was already a menacing 3.6kg, a big baby for a small mother. Taller mothers tend to have easier births, so say the midwives. The head of our daughter was 10cm wide, considered a large lump to pass. Bigger is not always better, in the world of births.
After some deliberating, we decided to choose labour induction via intravenous drip. The baby could be out in a matter of hours, they said. But every ward-wisened midwife knows only too well that every pregnancy is different.
Monday night passed with contractions a few times per hour. All I could do was attempt the act of sleep on a chair next to the lady of the day, as she lay uncomfortably on a hospital bed. Tuesday morning arrived, with the advice to walk around. Heather and I trolleyed her various drips (shown in the photo above) out into the corridor, and we shuffled slowly up and down the hallway. By this time she was feeling a fair amount of pain, and receiving what I could only imagine to be a very bad stomach cramp every 15 minutes.
Tuesday morning passed excruciatingly slowly into Tuesday night, with mother-in-law ferrying food from home. Heather was not allowed to eat, and I was feeling very uneasy. The feeling could be described as riding a rollercoaster for the first time, backwards, while blindfolded. Deep down you're pretty sure that things will turn out okay, but that doesn't make it any less scary.
At 6pm, the nurses told us that the baby wasn't coming anytime soon and to retire to a hospital bedroom and return if there were further developments. Heather and I went to another floor and I fell asleep at 8:30pm. Heather rang my cell phone at 10pm, telling me she had gone back to the birthing room again.
If there ever were an understated euphemism in the world of medical nomenclature, 'labour' would be it. Heather was in an extremely uncomfortable state, twisted in an unnatural posture of pain on a delivery bed. Her toes bundled up and shuddered every 5 minutes, as labour reared a nasty dose of all-consuming pain. Attempting what reassuring conversation I could, along with hand-holding, it became clear that the pain experienced was not a regular knife-in-the-gut kind of jab, but some kind of blunt-edged sword inserted into the stomach and twisted slowly for 90 seconds at a time. At the end of each extended contraction, all she could do was gasp for breath and wait for the next one.
Heather had been in labour since late Monday (although her water wasn't breaking), but the nurses on night duty weren't particularly alarmed. They gave me a blanket and put on some piano music on a CD player. There, in that overwarmed maternity ward, holding the hand of a wife in pain and utterly unable to do anything but wait, I listened to a recording of a single person playing a piano. I have no idea what the meaning of it all was, but that's exactly what happened. The nurses told us to wait until 8:30am, when the doctor would be back. That was around 4am. For Heather, it was turning into a matter of whether she could survive the intensity while remaining psychologically stable. We kept conversation going, but anytime I asked her a question before a contraction started, she was physically incapable of replying for two minutes. At the end of the contraction, she had usually forgotten the question. We both did what we could to reassure each other. From time to time she would bang her wrists on the bed rails, repeatedly and hard, to try and distract herself from the pain.
Babies get born every hour in the Areum Women's Hospital during the daytime, but almost none at night. The longest hours that I've ever experienced passed, before the doctor came in, performed a cervical check and pulled back with a concerned expression. The cervix was dilated but the head of our baby was not where it was supposed to be. We then had two options: keep waiting or choose surgery.
There are a few things that are useful to discuss beforehand between a mother-to-be and her closest ones. Those would be: whether to induce labour, whether to use an epidural,  and in what scenarios a Caesarean will be chosen.
In general, natural births are a good thing, in a scientific sense. Passage through the birth canal can clear the airways of the child, and although damage occurs, it is not as bad as getting surgically eviscerated. I maintained my previous opinion, which was that the choice of surgery would always be up to Heather. Mother-in-law wasn't particularly keen on anything but a natural birth, but developments had left us little choice. Heather had been for 2 days without food, endured 36 hours of pain and there was no guarantee that further labour would orientate our daughter in the womb properly. Labour is also an extremely stressful experience for the baby. Heather chose to go under the knife.
I concurred, and resigned myself to the skill of the doctors on duty. 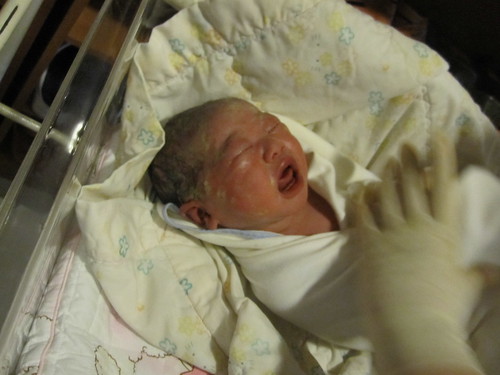 Her mother was still under general anaesthetic when this photo of our daughter was taken, exactly 12 minutes old. She was placed slightly upside-down in a baby bed, to drain the mucus from her airways. Shortly after this, I was allowed to hold her with carefully washed hands. She was clearly awake, and for a brief moment she stopped crying, but was shivering from the temperature drop.
How did it feel?
Well, I was expecting some strong waves of emotion, but mostly I felt relieved, tired, happy and still a little worried all at the same time. It was definitely a good feeling, but in every sense of the word, I was exhausted. 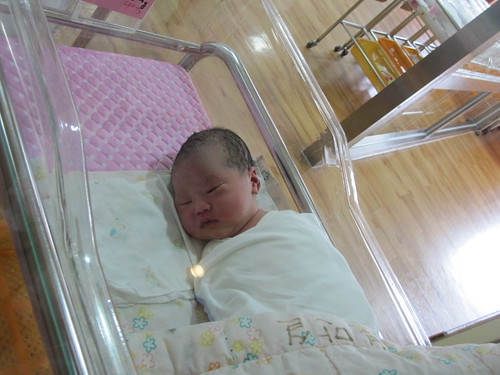 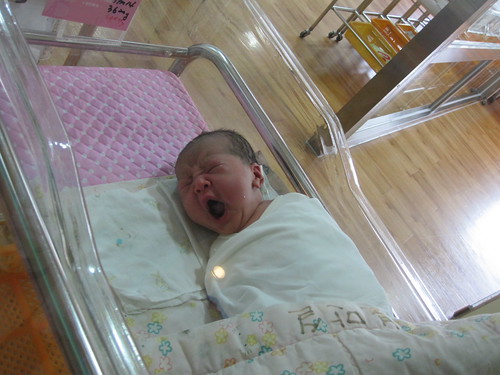 Heather was out of action for a few hours, but mother-in-law and I were allowed to stare at our baby through the large windows of the intensive care unit. Baengy was awake and yawning every few minutes. 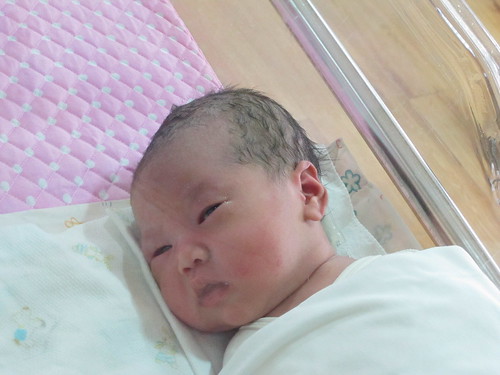 She was looking peaceful, but also as if she'd had a bit of a rough time. The first things I noticed were that her ears and mouth were exactly like her mother's. 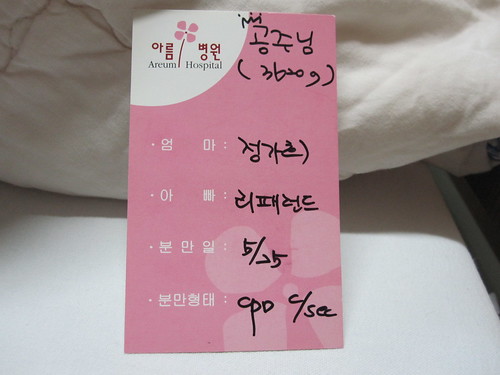 After writing down the birth details, the first thing that the nurses of the Areum Women's Hospital do is to record a tiny ink footprint and handprint of the baby. It's a good way to avoid baby mix-ups in the intensive care unit. 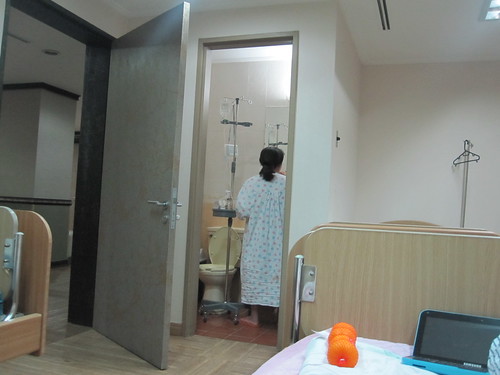 Heather couldn't walk for a day or so, but was eventually back on her feet. My professor gave me some time off and I was allowed to stay at the hospital for a few days. One major difference between Korea and most western countries is that births in Korea occur at special birthing clinics, which also have accommodation options. Most mothers will choose to have an extended stay at the clinic for a couple of weeks before going home. This provides the benefit of being looked after with meals cooked, and the babies are taken care of by nurses while the mother recuperates.
Breastfeeding occurs whenever the baby awakens, with the nurses ringing each mother's bedroom. It's an interesting system, and one that I've come to appreciate. 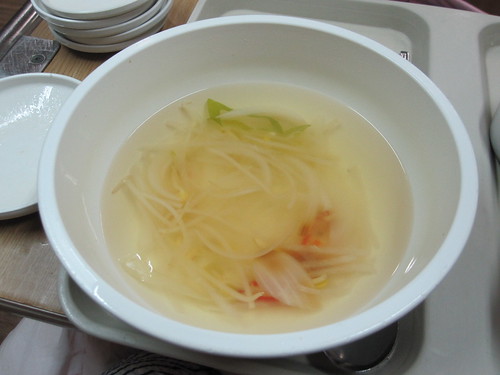 The food is designed to be very mild and bland. It also serves a secondary purpose of getting everyone looking forward to going back home. 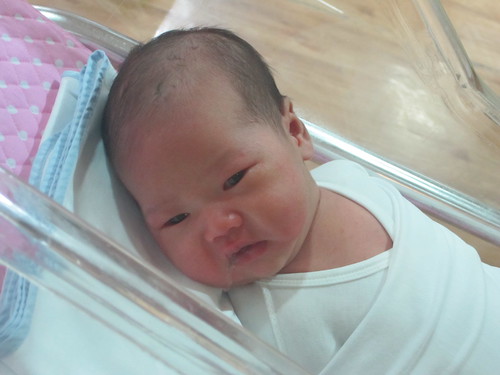 We soon named our daughter Ashley Farrand. Her Korean name is 이은서 (Eun-Seo Lee), suggested by her Korean grandmother. So her registered name is Ashley Eun-Seo Farrand, a delightful ethnographic mix of names.
Ashley means Ash tree meadow, and Eun-Seo is from the Chinese characters which mean rising to, or achieving, dreams or aspirations. 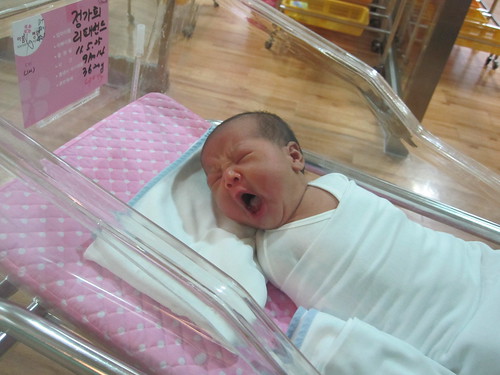 Each day immediately after her birth it was clear to see her becoming visibly healthier and awake for longer. Very satisfying. Viewing times were in the afternoon, which were always the highlight of the day. 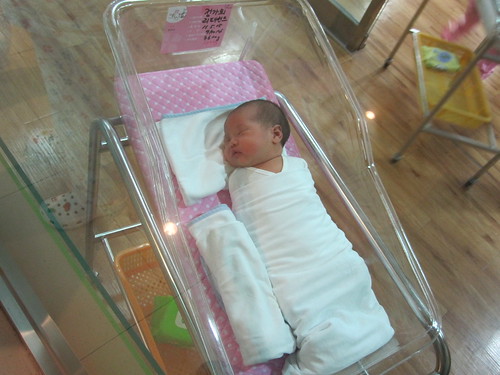 In Korea, they wrap up infants in these little sausage roll type affairs. Besides making the babies look hilariously cute, it also prevents them from injuring their fragile bones.
This video is of Ashley on her third day of life outside the womb. She's looking around because she can sense the movement of her bed, but newborns are actually blind for quite some time. They start seeing simple shades of black and white after a few days, but it takes longer for their brain to figure out what all the information means. 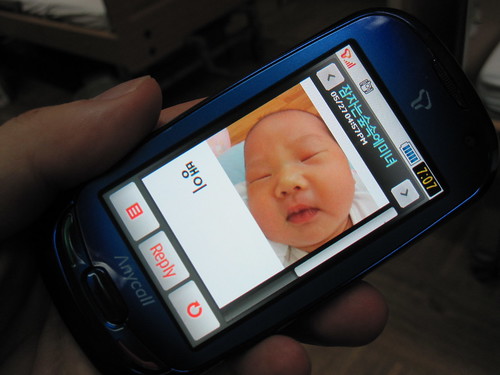 Heather took this photo of Ashley on her phone camera.
I distributed it accordingly. 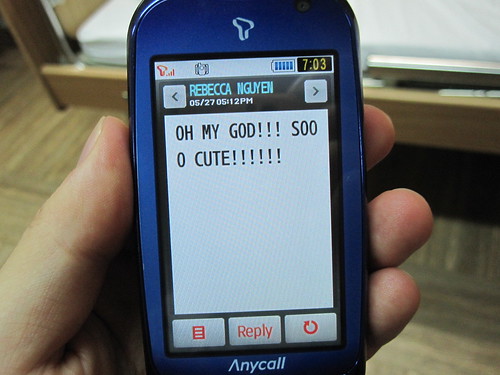 Here's one of the responses that made me chuckle. Rebecca is also pregnant, and due to give birth in early December. I wish both her and her husband loads of good luck. 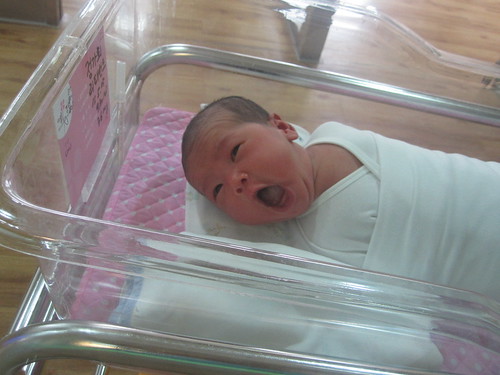 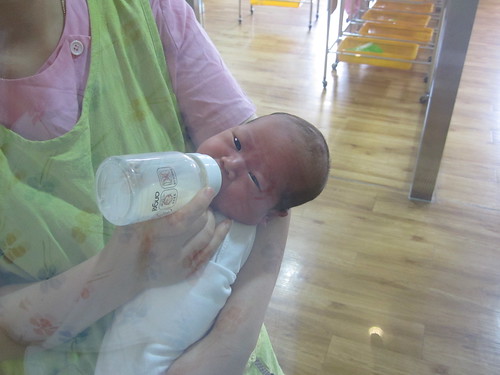 Ashley is feeding and growing normally. All the medical tests were passed with flying colours and she's received her first vaccination shots already.
She doesn't like needles - that's one thing she has in common with her parents.
There are a lot of things I like about this video, from the slow yawn to the expression of annoyance that subsides after the nurse repositions her head. 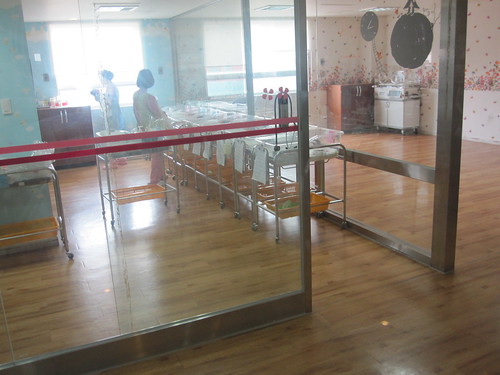 Diaper changing, breastfeeding and crying during the night are the main activities going on these days. Newborns are a 24 hour liability, and Heather is performing marvellously. I'm doing what I can to participate, but the real action starts when they both move back to Seoul, which will probably be in a month.
In the end, I can only describe the process of birth as an ordeal, to which males can only ever participate at the periphery. It's a worthwhile ordeal to go through together; stressful, but of epic value. Some fathers tend to wait outside the maternity room or at home, but I imagine many women would appreciate their partners close by and staying, or pretending to stay as positive-minded as possible.

Congratulations Heather and Lee!  What a beautiful baby.   I was so surprised to log on and see my former boss had a baby.  Wishing you all health and happiness.