I had read about the Ocean Aquarium of Penglai and it is a must do when in town. Apparently it is the largest ocean aquarium in Asia. It includes a polar area, a shark hall, a tropical rainforest, and a theater with mermaids, dolphins and sea lions.

After breakfast, I said bye to Daniel and went back up to the room to pack my bag for the day. I had to get some money out and as I hadn't done it here before, I was hoping it would be a smooth operation. Daniel told me about two ATM's near the shopping centre around the corner from us, so I would give those two a go. First ATM was all in Chinese. The second ATM had run out of money. I know had to go into the centre of town and go to their major China Bank there to retrieve money.

I asked for the hotel manager.... the only person in the entire hotel that could speak English and asked him how to get to the city centre and onto the bank. He organised a taxi for me, but I didn't want to driver to wait for me, as depending how far it was, I would walk back. Easy enough, we arrived at the bank and it really wasn't that far from our hotel. It was an easy 15 minute walk and in between were all these little shops, mechanics, warehouses and food stands.

Although none of the bank attendants spoke English, the ATM had the English option and sure enough I was rich again. I decided to walk back to take in abit more of the town and to see any shops I may be interested in that I may have missed as I played passenger in the cab.

Soon enough I was back in my room, I got my things and out the door I went again. I walked down the main street and hailed a cab from there. I pointed to a picture on a Penglai map I had and the driver knew exactly where to go. That was a plus! I think it's alot easier here, as it is a small town, so you can't get too lost. The aquarium was a little further from the Penglai Pavilion, about 5 minutes by car. 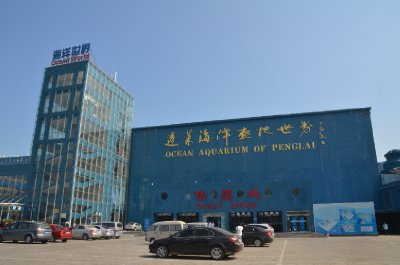 I soon arrived, and there were bus coaches everywhere!!! It was a little intimidating, seeing these massive tour groups and again, me being the only foreigner. Time to play it cool again LOL. I walked upto the ticket counter and pointed to one tickets, the fee was only 20 RMB Most of the tour groups were huddled around the entrance gates, so wondering whether or not I should line up behind them, I swifly walked through a side entrance and showed my tickets. They stamped it and in a went. I was happy about that!!! Who knows how long I would've had to stay in the line....

The first area you enter is the Tropical Rainforest Land. Here, they've made it feel like you've just stepped into the great Amazon. There are tanks full of different tropical fish and fake tree vines hanging from the ceiling. They have Macaws, Spider Monkeys and some sort of water rat on display. They also have a crocodile tank, where you can throw in a coin for good luck. Somehow, I don't think the crocs enjoy being in a tank full of coins. I don't think it's good for their health either.

Moving along, there is a waterfall to introduce the next scene was the Polar Land. There were fur seals and penguins parading in their enclosures. The animals looked happy and healthy. That's something I always look out for when visiting zoo parks in Asia. Turning the corner, there was a small theatre that was adjacent to the Polar Bears. There were two, big, grand artic bears. They were merrily swimming in and around their enclosure. and scaring some of the tourists as the polar bears would come rushing towards the glass and smash their massive paws up against the glass window. 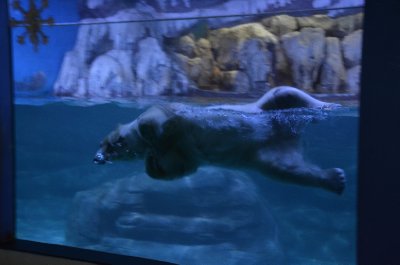 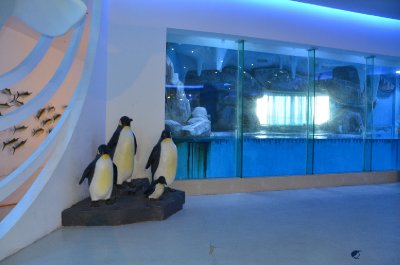 From Ocean Land, the path continued on the sharks and dolphines tanks. Outside they had Leopard Seals and more Seal Lions. They also had husky dogs, which I do and don't understand why.... I can see how it all fits in with the whole 'artic theme' but I think the Chinese consider large dogs as exotic almost 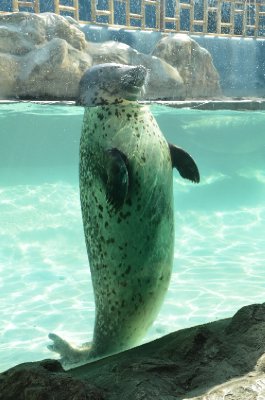 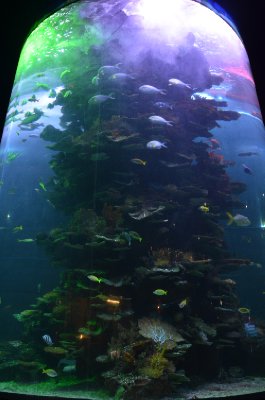 Giant tank with hundreds of fish in it 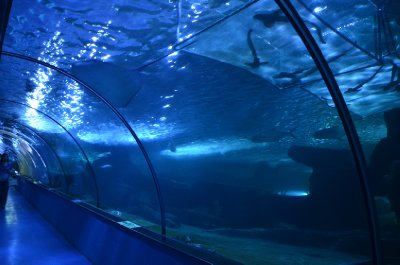 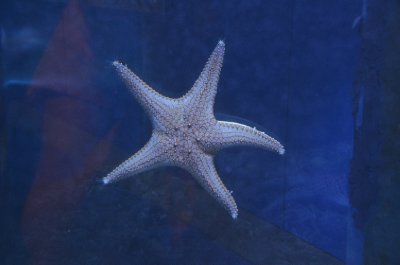 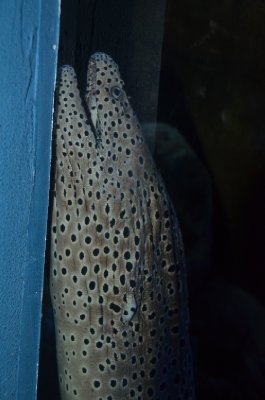 The Polar Land was a big exhibition in the aquarium, as it was also home to a walrus and the beautiful Blue Whale. They had about four of these creatures in separate tanks. One upon a time, they also homed a Killer Whale. The sign was still up, but whether or not they'd be getting it back in there was anyones guess. As I started heading to the Dolphine and Sea Lion show arena, in the corner were two Ocean Aquarium staff members with a humble Sea Lion ready for a photo opportunity. As you may know already, I take the chance at having my photo taken with any sort of animal, so this was perfect. It only cost me 20 RMB. I paid my fee, placed my bag on the floor and cosied upto the Sea Lion. He looked very noble. He's fur was very slick and moist and his little noise flared up. He's eyes tried sussing me out, as I too looked at him. I've never been so close to a seal before. My photo was taken and presented to me in a corny Ocean Aqaurium cardboard frame. I
loved it!!! 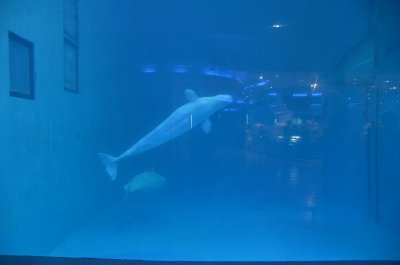 Before I made myself comfortable to watch the dolphin and sea lion show, I got myself some ice cream and popcorn for lunch. When I bought the popcorn, I didn't realise it had sugar in it. I tell you, they put sugar on everything that doesn't need sugar!!! grrrr, Pet hate!!!
Anyway... the show soon started and although it was all in Chinese, it was entertaining watching the animals perform their tricks. The sea lions would have a go at maths and would have to pick the correct number on a square block and the dolphines would jump high into the air and dive back in. 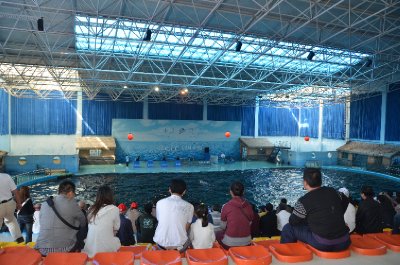 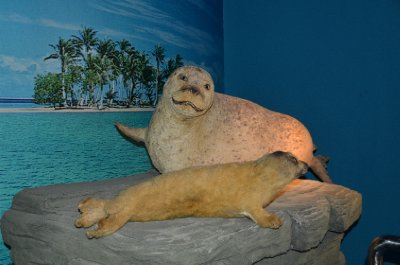 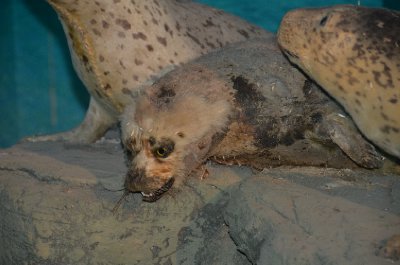 It looks so angry 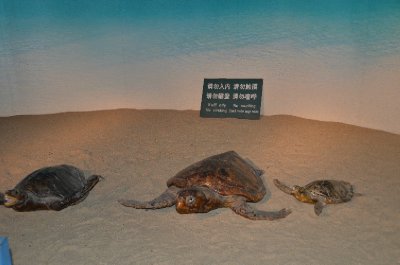 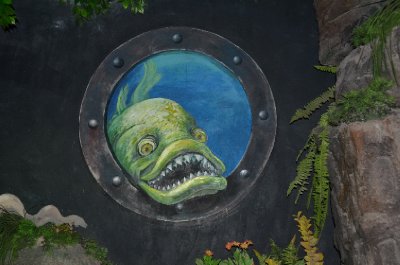 This was now the last section of the aquarium, before walking out through the souvenir shop. By now, it wrapped back near the main entrance and you could see how much busier it had gotten, compared to the morning when I arrived. With my travels, I figure it's best to get to places early, to beat the crowds as much as you can, because, again, I know everything thinks 'I'll get there early to beat the crowds too' LOL but also I find I have more energy in the mornings to do things and by the time I get home in the afternoons, I can chilaxxxxxxx, which is what I'm about to go do now.

Ocean Aquarium of Penglai remains copyright of the author Two Otters, a member of the travel community Travellerspoint.