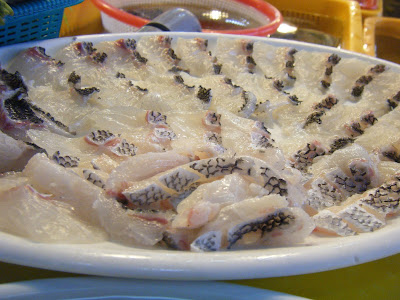 I realize that this post kind of stretches the parameters of what might be considered street food, but in my defence when I started this thing I always thought I’d include markets and hawker centres in my range. Also, after eating the stuff I just couldn’t help myself!

Jagalchi Fish Market is probably my favourite place in Busan. The place is literally teeming with every kind of sea creature you can imagine, and a fair amount you can’t. How most of it manages to end up on someone’s plate is beyond me, as its variety is matched by the sheer abundance of the stuff.

The raw fish operation at Jagalchi largely centres around one of the older market buildings just off the right of the outdoor section. It consists of a vast warehouse of sorts containing dozens of small traders and their catch, all packed in tight so that produce, prep area and eating counters all seem to spill onto and over each other. The floor is constantly awash with water and the low hung lights and lack of windows make you feel like it could be anytime of the day or night. On Saturday I decided to take a trip down there with my friend Roy for some hoe (pronounced whay, get the crap pun now?) 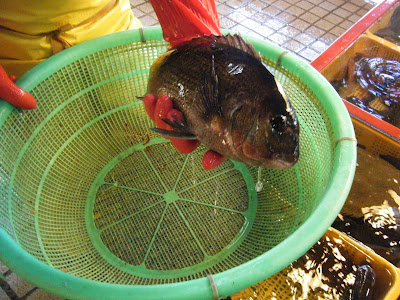 We quickly decided on a snapper for 30,000 won and before it could contemplate its fate it was quickly stunned and eviscerated, then carried off for further prep. While we waited, the vendor brought us a few bits and pieces to chew over. 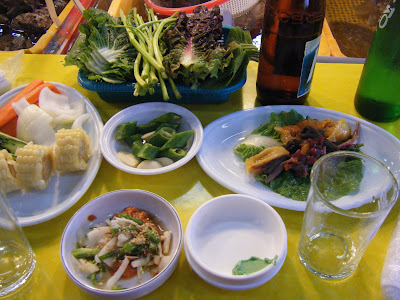 I’d never tried gaebul before and considering this is known to Koreans as “dog’s penis” I wasn’t really that bothered. Lucky for me however what was on the plate had been sliced up into a more appetizing shape and I quickly got stuck in. To improve the texture of you are supposed to lift it off the plate with your chopsticks and then fling it down again several times. This causes it to curl up a little (I’m getting used to my food trying to get away from me) making a little more al dente. Anyway, when I finally ate it I found it to be pleasingly chewy and, as with a lot of this sort of thing, tasting more of the dipping sauce than anything else. This, along with some salty, fresh tasting mongae (sea squirt) served as a great appetizer before the main event. 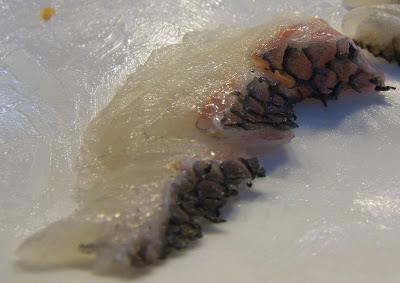 Spectacular. As per photo the snapper had been gutted, de-scaled and sliced up into half inch thick slices scored at regular intervals around their outer edge and arranged to resemble a large scallop shell. Later inquiry also told us the fish had been ever so slightly cooked at its outer edge to firm it up a little (cooking method unknown but possibly some sort of blow torch) before giving way to the translucent flesh.

And what flesh! If silk was remotely ingestible it would probably still fall short of this. Again, not so much taste as feeling; alternate passes at a spicy vinegary dip called chojang and a bowl of the ubiquitous soy sauce and wasabi tooled up for the flavour but the real money maker was the way the hoe glided around my mouth and down my throat like a piece of Teflon. At the same time it was literally bellowing FRESH at me, and not even the cuttlefish eying be reproachfully from a nearby bucket could infringe on my wellbeing at that moment. 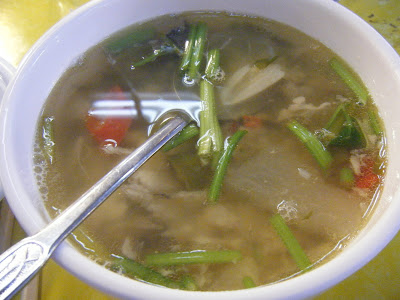 About three quarters of the way into the plate, our server brought us what remained of our fish bobbing around in a broth with dropwort stalks, red chili and green onions. The heat had been kind to the fish, it now taking on a flaky fleshy quality in a broth so deep I might as well have been at the bottom of the sea.