S.Korean Son Heng-Min of Tetterham Hotspur won the 2020 FIFA Puskas Award for his fancy goal on Dec 17, 2019 against Burnley. Son picked up the ball on the edge of the Spur's penalty area, ran the entire length of 80meters for 12 seconds with 12 touches, ridiculing 6 Burnley defenders. You gotta see the video below as words cannot describe this "Sonsational" performance.

The Puskas Award was established  in 2009 in honor of Hungarian Frenc Puskas who scored 512 goals in 528 matches in the 1960s to award the male or female, professional or amateur, who scored the most beautiful goal of the calendar year. Past winners include big names like Christina Ronaldo, Neymar, Zlatan Ibrahimovic, and  Mohamed Salah. Son is doing well this season also, leading the EPL with 11 goals. 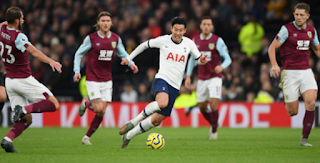 Another Korean soccer star as well known is Cha Bum-keun. He was a striker in Korean national team, served in the Air Force, began to play in German Bundes Liga late age of 26 in 1979, and scored 98 goals in BundesLiga until retirement in 1989. He was the Asian soccer player with most goals in European leagues until Son broke it this year.  Cha owes his success to his high school coach. Cha being a devout Christian, and a gentleman reluctant to make foul plays, the coach used to take Cha to a slaughterhouse, forcing him to cut the cows into pieces, to instill vicious character inside Cha.  Very likely my wife also got trained by Cha's coach, from the way she pushes me into Gucci and Prada shops. 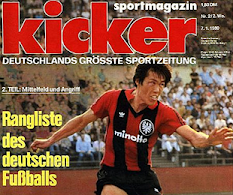 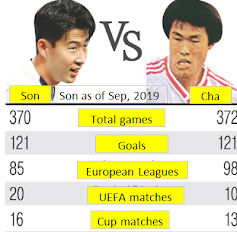