As you have probably seen live on CNN on Apr 27, Kim Jong-un became the first North Korean leader to cross DMZ for a meeting in S.Korea since Korea got divided right after liberation from Japan in 1945. In a joint Panmunjom Declaration after a big bear hug accompanied by their spouses, Kim Jong-un and SK president Moon Jae-in pledged to make nuclear-free Korean Peninsula, agreed to officially end the Korean War by the end this year, promised to hold another summit meeting in Pyeongyang this fall, and vowed to halt hostile acts along the DMZ, such as loudspeaker propaganda broadcasting. While most Koreans are excited about the dramatic turnaround from just a few months ago when Kim and Trump threw mud at each other over the size of their nuclear buttons, some critics caution that the Panmunjom Declaration is not much different from the two previous summit meetings in Pyongyang between Kim Jong-il and Kim Dae-jung in 2000 and with Roh Mu-hyun in 2007. The critics argue Kim Jong-un would be very reluctant by instinct to throw away for nothing the very thing that made him get all the attention from the rest of the world including the mighty U.S. 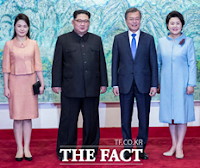 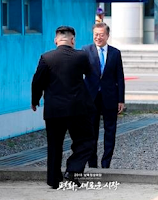 The Moon-Kim summit served only an appetizer as there were no details over how and when the denuclearization can be completed. The main menu will be coming when Trump sits on the table with Kim Jong-un in 3-4 weeks for CVID of nuclear program. My two cents for Trump and Moon for their Nobel. Trump better understand Kim Jong-un has Hitler's DNA in his family blood . Kim's grandpa started Korean War in 1950, much like Hitler did WWII, Kim's father blew up Korean Air flight in 1987, killing hundreds of innocent passengers, much like Hitler's Auschwitz, and Kim Jong-un himself terminated his own cronies, brother and uncle, much like Hitler did away with his Nazi friend Ernst Rohm in Nacht der langen Messer in 1934. Two previous S.Korean presidents got duped by Kim Jong-un's father in the past. President Moon better keep in mind, "If deceived the first time, it can be a mistake. If cheated the 2nd time, it is because you are a fool. If third time, you are an accomplice." Below is what Moon's barber will make Moon should he become an accomplice.
Korea TESOL: Helping Teachers Connect
Promoting learning and cross-cultural understanding among English Teachers and Learners in Korea.
GEUMDON
BUSAN Real Estate
RENT, BUY, SELL
All types of HOUSING
We speak English and
Can help you with
contract translation and
landlord communication
010-4499-8283