The House Armed Services Committee cited China’s failure to curb North Korea in nuke bomb development as the reason for deployment. Very strange that the nation of 1.4 billion people can’t shut up a spoiled kid just across the border.
.
2) More foreigners commit murders in Korea
According to statistics by police, 7.9% of all murders in Korea are committed by foreigners even though foreigners account for just 2.8 percent of the population. Violent crimes such as murder or rape took 31% of the crimes committed by foreigners in Korea, compared to 22% of the crimes committed by local Koreans. Police plans to make more patrols in areas which have large foreign populations.

While most foreigners are law abiding in Korea, there are a few foreign gangs, mostly from Asian countries, who prey on those from their own countries. Good thing gun ownership is not allowed in Korea. It could have been a lot worse otherwise.

2. Economy
1) Expo grand opening in Yeosu
Yeosu, a small sea port city in the southern tip of Korean peninsula with 300K people, began a 3 month journey of 2012 Yeosu Expo with the participation of 105 countries and an expected crowd of 100,000 visitors a day. CNN named it the top place to visit in 2012, and Lonely Planet described the Yeosu Expo as one of the top things to do this year. This is the 2nd Expo in Korea after Daejeon Expo in 1993. 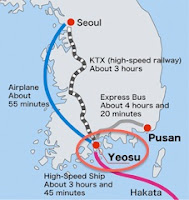 I am interested in visiting Yeosu, but, my nightmare in Universal Studio in Orlando, Florida in 1991 still haunts me. I had to wait 3 hours in line for a damn 5 minute E.T. ride.

2) Korean firms to market generic Viagra
As Pfizer’s patent on Viagra expires this month, 15 local pharmaceutical firms are launching generic versions of Viagra with 28 different product names. They are about one-third cheaper than the original. Since its debut in Korea in 1999, a total of 36 million pills of Viagra have been sold, and many more fake Viagra smuggled from China.

Viagra is to Korean herb medicine doctors what KFC is to chickens. Korean herb doctors prescribe and sell various herb extracts for stamina, but the extracts usually require months of intake to take effect. The survival of herb doctors now depends on how soon they can locate a super herb in the forest that turns a sponge into a rock in less than 30 minutes.

3. Auto Industry
1) Hyundai Beijing under fire
The production at Hyundai’s Beijing No.1 plant came to a complete stop as a fire broke out at its paint shop on May 8. The fire was put out within two hours without any casualties. There was a fear that some 1,300 units a day production of Accent, Elantra and Sonata from the No.1 plant would be down for weeks, but Hyundai made it in three days. How? Hyundai sent the vehicles from welding shop in No.1 plant to the paint shop in No.3 plant 30km away like piggyback on the trucks, and transported painted bodies back to the assembly shop in No.1 plant. The new No.3 plant was going to be fully operational in July, but Hyundai is using its paint shop many weeks in advance. 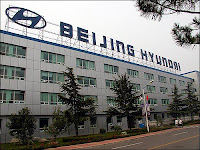 This is the second fire incident this year that threatened Hyundai’s global production. The first was in Georgia in March when one of its interior supplier’s plant got on fire. It happened just three days after I made a trip to Atlanta. The Beijing plant’s fire broke out just a week after my another trip to Atlanta late April. Hyundai just banned my further trip to Atlanta indefinitely.