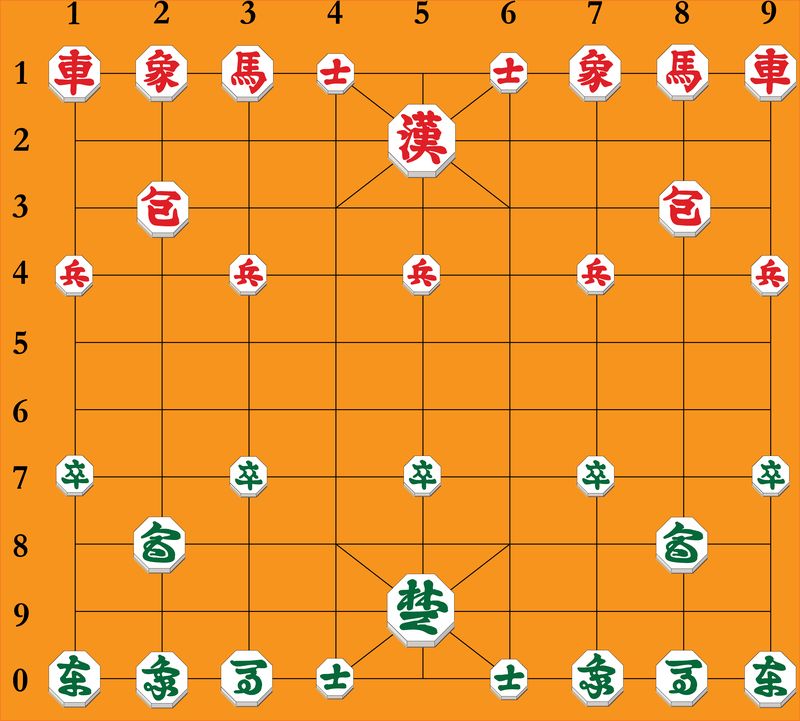 Source: Wikimedia (all other images taken from this one)

A note to my wonderful veteran expat readers: 'Life in Korea' posts are aimed primarily at the newer expats among us. Think of these like the 'Idiot's Guide' books - an introduction for some, a review for others. If I missed something or you can clarify, comment away!

In the odd chance you stop by any park where ajosshi (old married men) are playing 장기 (janggi, or Korean chess) and want to follow along, take a look. It might be a little geeky to some, but if you've ever played regular chess it's not too difficult to pick up. It's fairly similar to Chinese Xiangqi, but has some notable differences which go beyond the scope of this post.

There are three noteworthy differences between janggi and standard Western-style chess:
A couple of other notes: colors can be red and green, red and blue, or even red and black. In some cases, the older or more experienced person will go first, or may take a piece of each color in each hand for their opponent to choose. This has some implications in scoring (something a casual game will probably never get to), but also can change the placement of pieces. The player going first places his horses and elephants first (they can switch places in the starting formation if a player desires), and the player going second follows.

Since the hardest part will be figuring out which pieces are which or move which ways, let's start with that.
Each person starts out with the following sixteen pieces:

Soldier (Pawn) - similar to the standard pawn, the Soldier can move (and capture) forward, left or right. While inside the enemy fortress, Soldiers can also move diagonally along the lines. You can't move backwards (just like in Western chess), and there's no 'promotion' once you reach the top row - you're stuck to moving sideways at this point.

Horse (Knight) - Horses move like a Knight in Chess, except that they can't jump over other pieces. Move one point out on a row or column, then diagonally one point.

Elephants are like horses (or knights) on steroids. Move one point out on a row or column, then two steps diagonally outward. All the intervening points must be empty - in other words, no jumping over other pieces here either.

Chariot (Rook) - Chariots move like the Rook in Western Chess, that is, any number of squares along a row or column until blocked by another piece. While inside the opponent's fortress, Chariots can also move along the diagonal lines.

Cannons moves like Chariots (Rooks in traditional chess), but can only move by leaping over an intervening piece, called a "screen". Cannons can't capture other Cannons or use other Cannons as screens (thus making them more powerful in the beginning but weaker in the endgame). While inside the opponent's fortress, Cannons can also jump along the diagonal lines.

Guard - The guard must stay confined to the fortress. It can only move one space at a time along the lines within its own 3x3 grid. As you might guess, this makes it a weaker and far more defensive piece than anything seen in a Western chess game.

OK, so now you know the pieces - but there's a LOT more to the game than that. The rules are fairly similar to Western chess - alternating turns, capturing pieces, checks and checkmates, and the like. One rule that's different is that you can pass your turn if you're not in check. Also, one's general cannot face the opposing general without other pieces in between. Another janggi site explains it well:

If one player finds himself with less powerful pieces on the board than his opponent, he may take the option of facing the other king, with no pieces intervening between the two, placing the opponent in check. The opposing king must then move out of check, and the game continues. The player who uses this option, however, forsakes all possibility of winning the game. Even if, later, he checkmates the enemy king, the game is considered a draw. This special check by the king may happen more than once, by the same player.

Wikipedia's page on janggi is excellent, but there's plenty more to the game beyond a crowd-sourced encyclopedia. Another site shows regular chess pieces in place of janggi pieces, which at least gives a more visual idea. Yet another site is here, while an excellent explanation of the game is available in PDF format here. There's very little to be found in terms of strategy online - this particular version of chess isn't very popular outside of Korea, and isn't played as much by the younger generations. Most of the strategy guides that exist are in Korean only, since the game is far from a tourist attraction. On the positive side, seeing the look on an ajosshi's face when they lose to a foreigner like yourself may be all the reason you need to give it a go.

Think you've got it figured out? Try out this Flash version of Korean chess before taking on an ajosshi.