Today is a great day to learn Korean through a lesson on Korean prepositions! This is another important piece of Korean grammar and vocabulary. 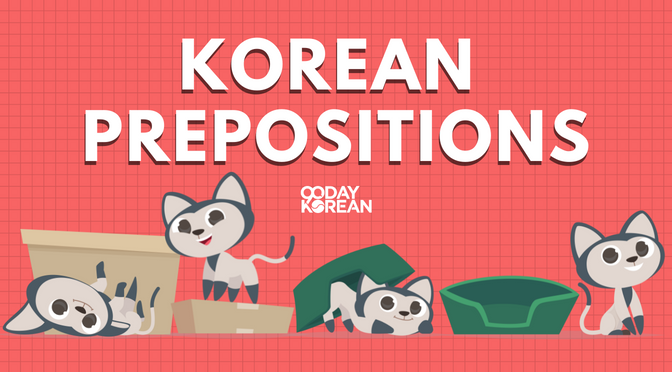 They can be quite easy to learn, but they may function a little differently than prepositions in your own language might. With them, you can make your sentences look more natural and complete. After all, prepositions and postpositions are likely to be an integral part of your native language’s grammar and sentence structure as well!

Let’s get to learning this bit of essential Korean grammar!

How to say “preposition” in Korean

The Korean word for “preposition” is 조사 (josa). This is another word to add to your Korean vocabulary. Let’s learn more about how to use it below.

What is a Korean preposition?

Korean prepositions are the same as in other languages: on, in, under… However, in the Korean language, they are technically not seen as their own group of words, they are simply nouns.

And in fact, you need to combine them together with particles when forming sentences using these prepositions. Most commonly, you may see them attached to -에 (-e), -에서 (-eseo), or -으로 (-euro) type of particle.

If we want to go even more technical with the grammar, the possessive particle 의 (ui) should follow 식탁 (siktak), and turn it into 식탁의 (siktagui). This would also change the direct translation of the phrase 식탁의 위에 (siktagui wie) into “at the tables above.”

However, most often, 의 (ui) is dropped off entirely. Thus, you will likely not ever need it when writing your sentences. But it’s good to know this in case you ever come across sentences using 의 (ui) before the preposition.

As mentioned above, while Korean prepositions link nouns or pronouns and give the same meaning to the sentence as English prepositions, they are used rather differently. They act more like nouns and are used after the noun they are related to, making them actually postpositions.

In addition, a particle is required to be added after the preposition for proper function. However, do note that for the noun the preposition gets attached to, you can drop the subject marker. In other words, a word like 식탁 (siktak) can appear just as is, rather than as 식탁이 (siktagi).

Below you can find a list of the most common Korean prepositions.

What are the most common Korean prepositions?

Next, let’s take a closer look at some of these prepositions. As you’re learning Korean this way, you’ll know for certain how and in which situations you can use them.

위 (wi) quite precisely means that something is on top of, so above, something else. For example, a book is on the table, or a pillow is on the bed.

This means that when you want to say something similar to “on the wall,” you cannot use 위 (wi). In this case, you would combine the desired noun with the word 바로 (baro). Additionally, 바로 (baro) should be placed before the noun. In English, it translates as “directly.”

Also, when it is clear in the sentence you are making that something is “on,” “over,” or “above” something, you may also sometimes omit 위. In these situations, simply add 에 (e) directly to the noun, such as table or bed, and the meaning will remain the same.

In the case of the preposition for under, we have two options: 아래 (arae) and 밑 (mit). However, their usage is quite different from one another.

아래 (arae) means that something is a whole level lower than the topic you are speaking of. Perhaps more easily, think of something being at the bottom of the topic of the sentence when you use 아래 (arae). You can use this on any topic. It can be sunshine, the sky, moonlight, or something else similar, like the sea level.

밑 (mit) can have the same meaning, but in addition, it simply means anything below or at the bottom of a tangible object.

Again we have two prepositions that mean the same at a quick glance, as both 안 (an) and 속 (sok) mean inside. When using 안 (an), it simply means something is inside rather than outside. However, 속 (sok) means inside, regardless of whether it’s still outside in some way. 속 (sok) also means surrounded.

How are these Korean prepositions used in a sentence?

Here are some example Korean sentences so that you can get a better understanding of Korean prepositions and the usage and placement of these words in a sentence. You can practice how to speak Korean with these examples too!

The ring is inside the box.

I found my keys under the car.

The gift is waiting for you on the bed.

What is your favorite thing to do outside?

What can we find at the bottom of this mountain?

He is in my mind all the time.

You can find the subway station across the street from the clothing store.

Should we turn left or right from here?

I will be waiting for you in front of the restaurant.

Wow! Now you know the most common Korean prepositions and also how to use them! Despite them acting more like postpositions, did you find them easy to understand? With these, you can express phrases like if the location of an object is inside the house, beside the car, etc.

What are these prepositions like in your native language? Let us know by leaving us a comment below! If you’d like to keep learning more similar lessons, head over to our Korean grammar section!