When you think of Korea, what do you think of? K-Pop, kimchi, and Korean barbeque? What about alcohol? Korea is home to a wide variety of interesting (and delicious!) alcoholic concoctions that make enjoying a night out drinking with friends anything but boring.

Put down the beer, and read on for a list of must-try Korean alcoholic beverages that you should incorporate into your next evening out! Bottoms up! 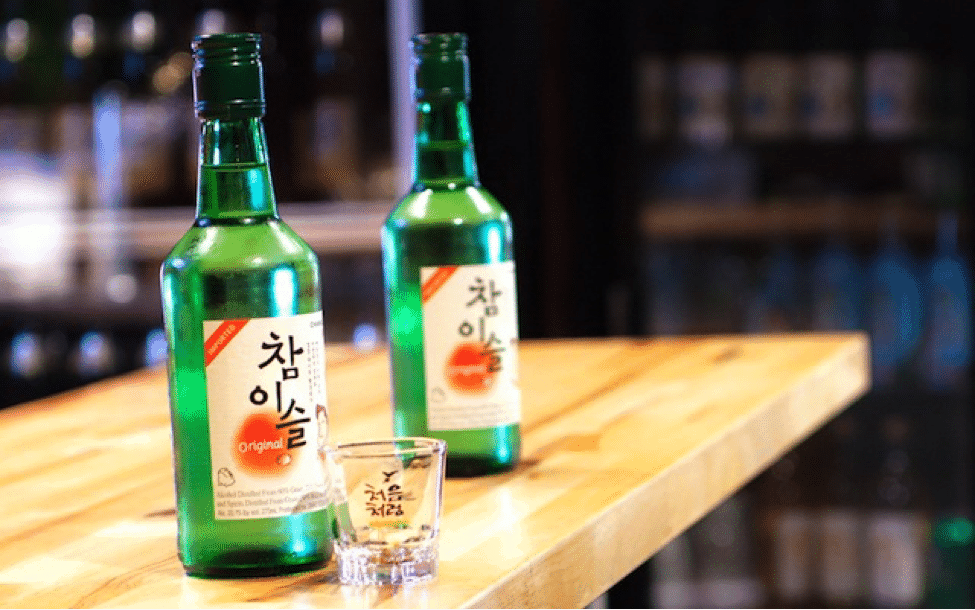 It doesn’t get more Korean than soju, a quintessential Korean alcohol. That being said, Koreans aren’t the only ones who love soju – believe it or not, it’s the most widely consumed type of alcohol in the world!

Soju pairs well with a wide variety of popular Korean dishes, so it is considered by many to be a staple for a great, well-rounded dinner. However, be careful before you pour your third or fourth glass – soju is commonly 19-25% alcohol, so it is a much higher proof than beer and wine. Don’t let that scare you away, though! The distinct, sharp taste of soju is popular for a reason. Stop and pick up a bottle before your next dinner party and you’ll see what all the buzz is about! 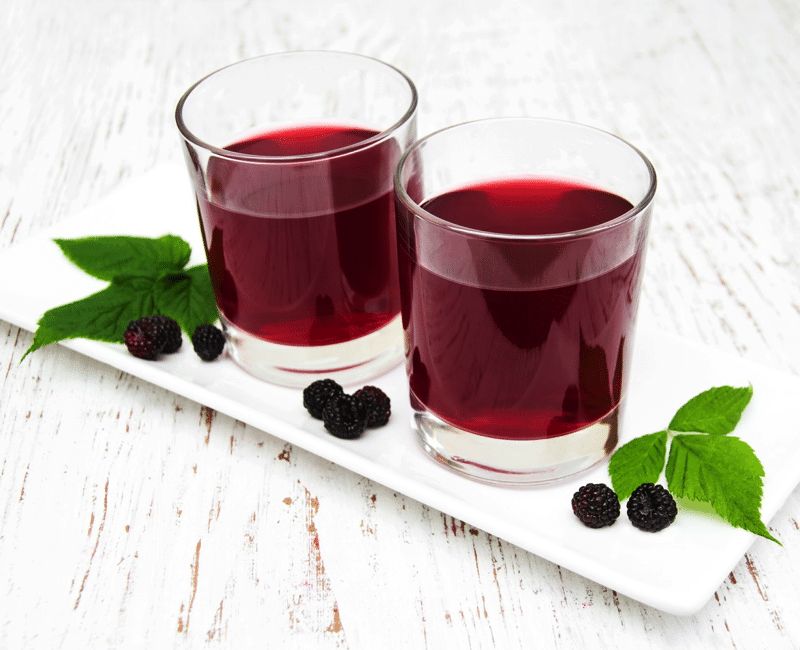 Time for a quick wine lesson! As I’m sure you’re aware, wine is made from grapes, and the different flavors in different types of wine come from manipulating the fermenting process to enhance different properties of the grapes’ flavor. So, what would happen if a fruit like blackberries was used instead of grapes? A delicious beverage called bokbunja is what happens!

That being said, the similarities between bokbunja and wine stops there. Bokbunja has a much higher alcohol content than a standard glass of red or white wine – a glass of bokbunja averages 15-19% alcohol, and a glass of wine averages between 9-16%. Due to the high acidity of the blackberries, bokbunja is a delight to drink with lightly seasoned seafood dishes.

Bokbunja also has a less-known property that makes it a huge hit – it’s been linked to a rise in testosterone in men, making it a delicious aphrodisiac. Pick up a bottle of this tart Korean alcohol the next time you’re cooking fish, crab, or octopus for your date and you’ll be in for a treat! 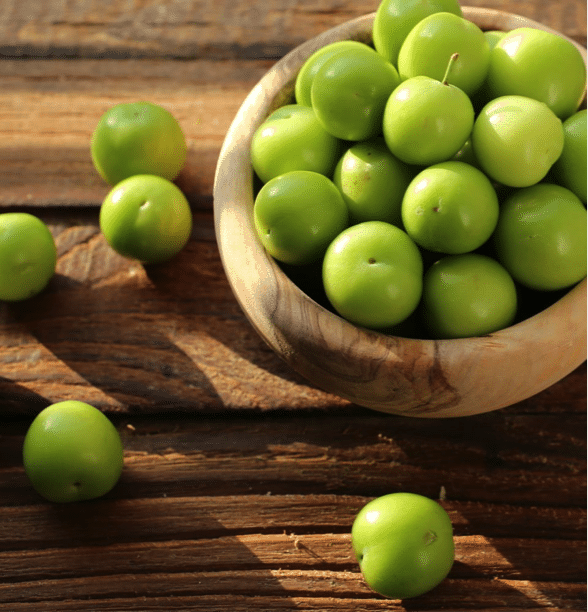 Are you a fan of sweet dessert wines? If so, maeshilju is the drink for you! Maeshilju is a super sweet Korean alcohol made from green plums fermented with a sweetener, like light brown sugar or honey. The alcohol percentage of this drink is sitting at a decent 14%, which means you’ll be able to enjoy a few glasses without falling over or running into walls.

Maeshilju doesn’t pair particularly well with dinner because its sweetness can be overpowering, but a glass after a meal makes for a fantastic dessert. Break out some maeshilju the next time you’re hosting a dinner party and would like to bring the dining experience to a well-rounded finish for your friends or family. They won’t be disappointed! 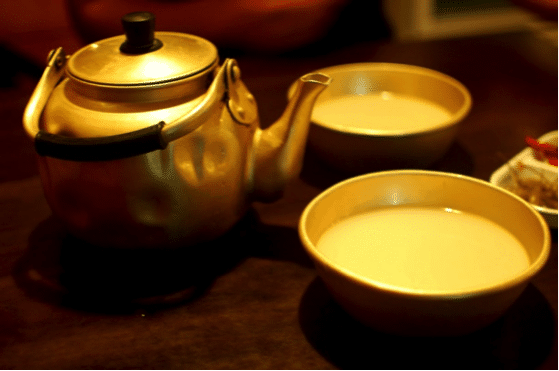 Makgeolli is the original Korean alcohol – it’s much older than the other alcohols listed on this list, but it’s still a favorite in Korean bars and restaurants for good reason!

Makgeolli is a think, sweet rice wine that is sweet and tangy with a touch of carbonation to pull the drink together. In recent years, makgeolli has started becoming popular with the younger crowd when paired with a fruit cocktail to make it slightly sweeter. There are a ton of different types of makgeolli available for purchase – some renditions add additional flavors, while some renditions pride themselves on using pure, organic ingredients for an all-around smooth and unbeatable taste (at a slightly higher price). Shop around and find the makgeolli that you prefer, and take part in a tradition almost as old as Korea itself! 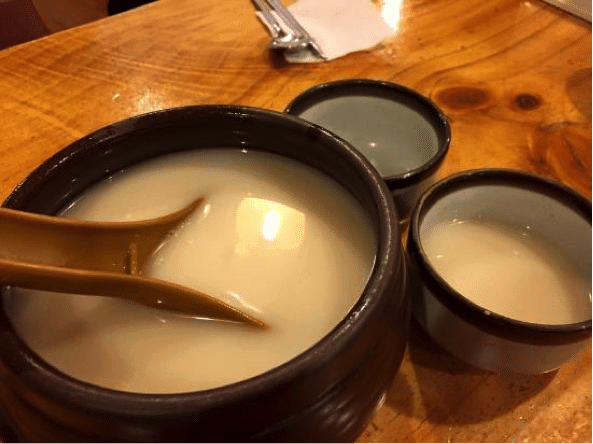 Dongdongju is a less-popular (but still delicious!) variation of makgeolli. Makgeolli is made from rice, and as a result is thick and can be full of sediment if it’s unfiltered. Dongdongju is its unfiltered cousin – your standard glass of dongdongju will have rice particles in the bottom of the glass, adding an interesting texture to an already interesting drink. Aside from the difference in thickness and texture as a result of the filtering, dongdongju has a very similar flavor profile to makgeolli, so if you’re a fan of makgeolli give dongdongju a try! 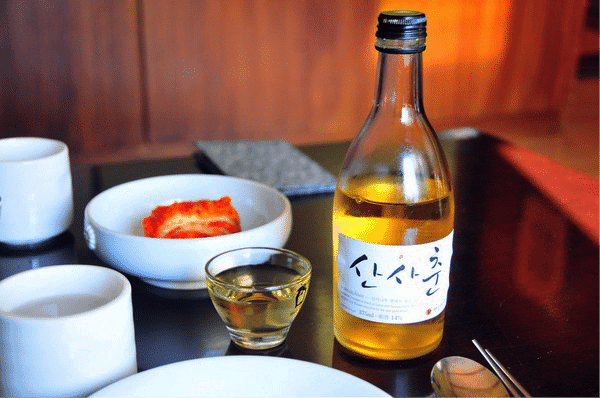 Sansachun has been considered a “medicinal alcohol” for over 400 years – supposedly, sansachun is the drink to pour when you’re stressed or anxious, as it’s supposed to calm the nerves and soothe the body. Sign me up!

Brewed from hawthorn berries, sansachun is slightly sour and is said to enhance appetite if it’s consumed prior to eating, which makes it a popular pre-dinner drink. Use sansachun to unwind the next time you’ve had a long day, and let us know what you think in the comments below! 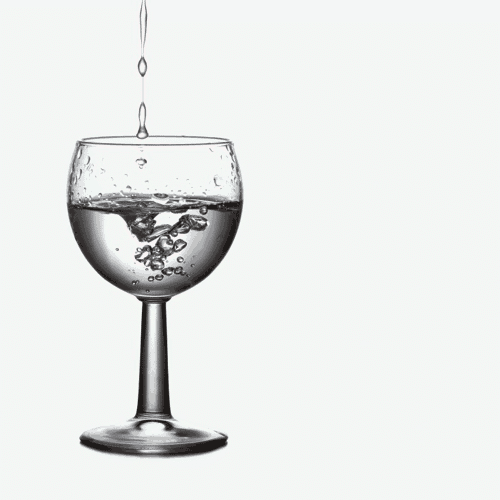 Cheongju is literally “clear liquor” in Korean, and true to its name, it’s a clear Korean rice wine. Think of it as a very mild, slightly sweet soju. The difference in taste comes from being fermented at least twice (rather than once), and the difference in the fermentation process produces a mild, sweet beverage that appeals to many drinkers who find the taste of soju too intense or unpalatable. If you gave soju a shot and you didn’t know what all the fuss was about, try cheongju for a dialed back drinking experience that you’ll be sure to enjoy!

Getting to know the food and drink of a particular culture can be intimidating if you don’t have a point of reference. Hopefully this list helps you navigate the Korean drinking scene and have some fun! Do you have a favorite Korean liquor that wasn’t on this list? Be sure to tell us about it in the comments!