Skip to main content
Today, one of my 6th grade students was wearing this shirt: 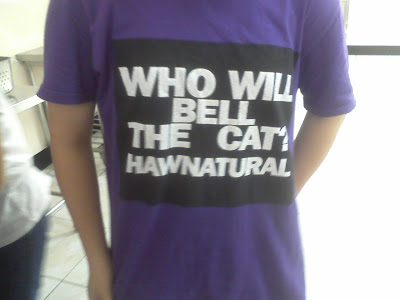 I thought it was hilarious, random Konglish and the other two Korean English teachers in the building thought so too.
When I was breaking it apart with my co-teacher it dawned on me that I knew exactly what it was referring to. In my pseudo-advanced English class last year we were studying "Aesop's Fables" (I say this with quotes because they were butchered beyond belief but that's ESL for you) and there was a story about these mice getting butchered by a cat. The mice had a meeting and were all like 'let's put a bell on the damned cat so it can't sneak up on us anymore.' Everyone thought it was a fabulous idea until of course the wise old mouse asked 'but who would put the bell on the cat?' Or, in perfect Konglish: who will bell the cat?
Of course, I have no idea what 'hawnatural' is.
I miss having a computer at home, however slow and crotchety she was. Even if I was reading I'd keep Facebook chat on so I could chat with friends back home. It's lonely. So instead, I go to a PC bang and worry about dying from cancer induced my second hand smoke. Think, this blog entry is brought to you at the expense of my lungs!  People as rampantly morbid as I am should be allowed to safely squirrel away in their studio apartments during off hours.