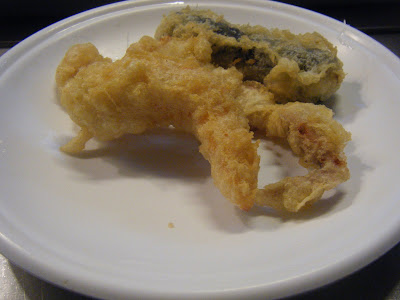 Next month we have open classes in our Hagwon. What this means is that for five weeks we must practice the same class over and over again with our designated students, culminating in a display of the kids’ educational prowess in front of their mothers in June. The whole practice is a complete waste of time and unfortunately pretty indicative of the Hagwon system as a whole. Education comes far down the list after money, appearances, and more money again.

It’s also pretty stressful. One of the classes I’m teaching has only been learning English for a few months now and are more preoccupied with shoving their shoes in my face than listening to anything the big red man at the front has to say. The other class, meanwhile, is composed mainly of the most disruptive kids in the school thrown together where they can tear each other, and their teacher, apart in isolation. Neither class is particularly bad, but they don’t make it easy on themselves and I’ve found myself shouting at them for all the wrong reasons.

As such there have been some pretty dark moods of late and none of these more so than on Wednesday, when after a ten hour day I decided to take the long way home by heading down to Seomyeon to check out the street food situation. I’d seen various pochamanchas in the area before and half-remember some really good noodles on the street there after a night drinking, so thought that if anything could lift my mood, it would have to be some serious kerbside eating action. 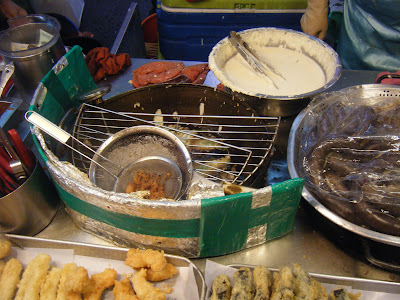 Upon exiting the subway the first food stall I saw was one selling an all star line up of street food. A great big ban-marie of deokbokki sat next to another filled with compressed fish jelly on sticks, while next to these a coil of soondae steamed away and tempura of various shapes and sizes bubbled and spat in a large metal pan of oil. It all looked pretty good but the trouble was that it was just too busy. As such I walked by in search of something-else-I-thought-I-might-have-seen-sometime, but finding my minds eye to be out of tune with my sense of direction, I somehow ended up back where I started. This time, however, the stall was a little quieter and with time pushing on I decided to jaw down and get it over with. It was then that my tempura education really began.

I should say re-education actually, because I’ve had this stuff before. The first time was at a hole-in-the-wall in Haeundae the first week we got here. On that occasion the tempura was soggy, old and greasy. Not the best start really. Later when I tried it again at various buffets and Japanese places I also found it lacking – not always disgusting, but just not great. 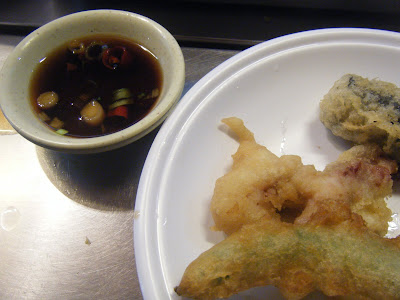 Happily, this wasn’t the case this time. On offer was a selection of octopus tentacles, mini kimbap (rice, ham and radish rolled in dried seaweed,) prawn, rice cake and green chili peppers, all dipped in a thin white batter then deep fried to perfection. Most of these stalls work on a trust basis and you simple select what you want to eat from the trays in front of you with a pair of mini tongs, then tell the vendor what you’ve eaten. In the interests of diversity, I chose one of each to start.

First down the hatch was the octopus tentacles; long spindly pieces of tender octopus covered in a salty, crisp, light batter that kept slipping off in places and exposing the good stuff underneath. Great on its own, the accompanying dip of soy sauce (strong, salty, and loaded with sliced chilis) transported the octo to another realm. I soon found out that the same could be said for most of the other tempura on my plate – fresh ingredients cooked in the same light batter then elevated with a timely introduction to the soy sauce. Fantastic. 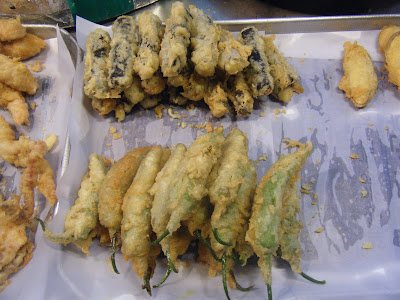 However, the real pay day undoubtedly lay in the battered green chili pepper. I’d seen these boys before in passing but had assumed that a whole pepper in batter would be a mix of sensations my body wouldn’t be receptive to. I was wrong. The pepper was fresh, crunchy and to my surprise, stuffed with glass noodles (these things get around!) Having been emptied of seeds, the heat was of a manageable temperature, though you can never quite tell when you bite into these which way it’s going to go. The batter and soy sauce naturally worked their magic and it quickly became the best thing I’ve eaten all week and trust me, this week’s been good.

I paid up feeling full (the whole thing cost a mere 2000 won) and left in much better spirits than I arrived, proving to myself once again that salvation often lies in a humble streetside food cart. Well done me. 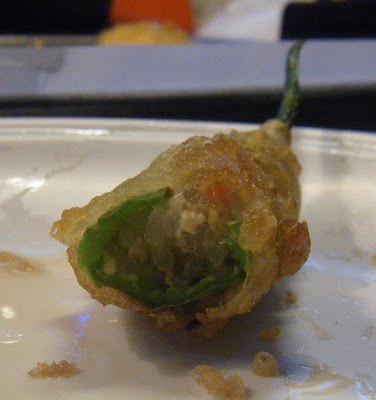