I cannot believe the month of March is over. Completely gone! How time just flies! Yesterday was spent just being lazy around the hotel, but today Jenny and I are going to the Junam wetlands. It's about a 15 minute cab ride and is the home to a variety of native birds and wildlife such as water snakes, squirrels and small leopard cats.

It was easy enough to get there, although I got the reception girl to write the Junam Wetlands in Korean. One thing I've noticed is that although English words are common just like Korean words are, the locals just don't understand it. Even if you pronounce the word correctly, they still give you a blank look. You've almost got to enforce an accent onto every word. For example, the store- Home Plus. Quite easy isn't it? Not to the Koreans!!! You have to pronounce it as- Hom-er-Plus. Go figure...

Anyway, so I had Junam Wetlands written for us in Korean and I showed it to the cab driver and pointed to it on the map. He still looked abit confused but starts up the car anyway and off we go! I start feeling more confident about where we're going when I start seeing road signs directing us towards the wetlands.

He gets us there safely and it only cost us about W13,000. We climbed out of the cab and walk over to the information centre. Inside, they had an interactive learning section and a kids room. It was full of information of what you'll see at the reservoir and what birds to look out for and the best ways to bird watch. I liked the fact the information was both written in Korean and English. FYI if you ever intend of visiting the centre, there's a few things you should take note of:

1. Although it's a main tourist attraction, the staff speak little or no English- It was very broken English and they go to lunch between 12:00pm and 13:00pm. Between these hours the information centre is open, but there is noone there to assist you.

2. Plan your departure transport. On weekdays, there is no public transport from the Junam Wetlands. You will have to walk back to the main road and wait for a bus. The bus eventually does turn up and luckily it took us back to the Changwon Train Station. There is a bus that comes on Sundays, which will take you to and from the Wetlands.

There was a 9km walk we could do, but we thought it was way too long. I really liked where the Wetlands were located. It was rural Korea and there was alot of farmland and workers harvesting. It is spring here at the moment and it's so beautiful seeing everything blossoming! 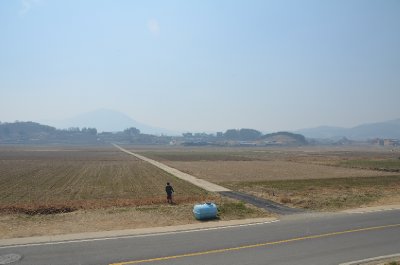 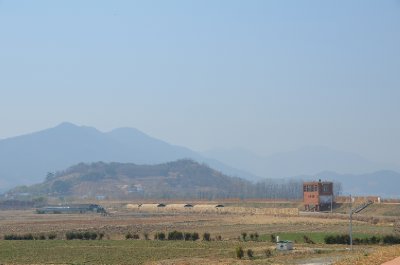 view from the wetlands 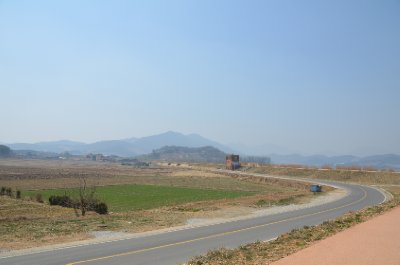 view from the wetlands

Jenny and I walked the boardwalk and stopped to take in the view. The wetlands are very tranquil and is a lovely location if you want to get away from the noisey city. It was quite foggy and there weren't that many birds about, but we did see a few nests along the walkway. You could here the little birds chirping and moving about their nests. Very cute! 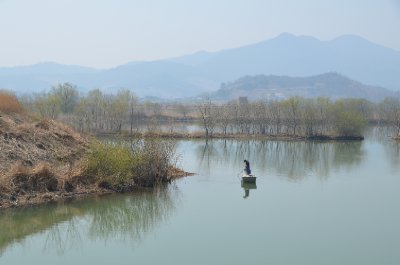 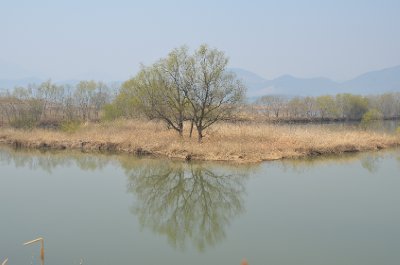 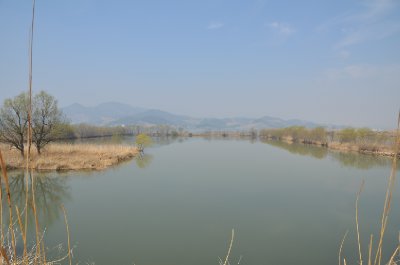 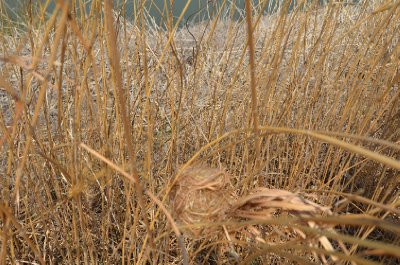 a ball of nest

Jenny and I stayed for about 2 hours. It was a very hot day. So hot, that I was wearing a t-shirt. That is a first for my for South Korea. It felt great feeling the sun on my skin. We walked back to the information centre to see if they could tell us where we'd be able to catch a cab from. As per my FYI above, this is when we found out that the staff members were at lunch. We also realised that we had not seen one cab come into the wetlands the entire time we were there, so I don't think they come out here often. We had reached our first dilmena here in South Korea. How do we get out?! We felt stranded. Although I told Daniel where we'd be, it would be nightfall by the time he'd realise I wasn't home. I didn't have a phone on me, or my Korean phrase book on me and we definately couldn't speak any Korean. It was now after 12.00pm, so we figured we would walk up to the main road and along the way, we would attempt to hitch hike. Now I remember telling my mum before I left, that I would never do things here in Korea that I wouldn't do at home. And so here I was with Jenny hitch hiking. It was sort of our last resort! As we stuck out our arm and poked our thumbs up, cars just kept passing us, they even drove onto the side lane to avoid us. What was wrong with them?! Don't they want to help two stranded foreign women??? Apparently not. 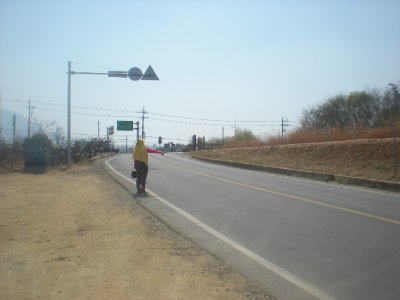 After our failed attempt at hitch hiking, we finally reached the bus stop and tried to read the timetable and bus route. Nothing. It was all in Korean. Dammit! We decided to just catch the first bus that came our way. We had to get out of here! I kept thinking to myself... what if were stuck here?! eventually it would start to get colder... we had no food, a half bottle of water.....It was the first time in Korea that I was worried. We had no way of contacting anyone. Even if we could get to a phone booth, we didn't know anyones phone number.

As we sat at the bus stop, we saw several buses stop. But they were all going in the opposite direction. We knew a bus had to stop at our stop at some stage, so we waited..... and waited.....

Around 20 minutes later, in the distance, we could see a green vehicle moving coming towards us, as we squinted our eyes, we jumped up and waved our hands madly at it. It was a BUS!!! our ticket out of the Wetlands!!! woohoooo!!!! Ohhhh it was the best feeling ever. We were saved!! The bus pulled over and we jumped in. Surprisingly, it was full! All the seats were taken, except one, so as Jenny sat down I stood just in front of her. When we got on the bus, I couldn't see the paying machine, so I assumed the system was like in Japan, where you pay for your bus ride as you get off at your stop, but a few minutes into the ride, the bus driver started shouting at me and motioning for me to come over. There was an empty seat next to him, so I thought 'ohhh how nice, he's offering me the seat...' NOPE! how wrong was I. He was shouting at me to PAY! lol. I was pretty embarrassed and kept saying 'ohhh sorry, sorry' in English. I should probably learn how to say sorry in Korean. I say it often enough. Our fee was W950 (95 cents each) and after paying it, I went back to my standing spot.

A few minutes into the ride, we started seeing civilisation. We were back in town and it was a great feeling. I started noticing buildings that I remembered seeing on the way in, so I knew we were well and truly on our way home. The bus eventually pulled up at the Changwon Train Station. We didn't know this was our stop, until two lovely young Korean girls tapped us on our shoulders and said to us 'last stop'. Ahh we thought. Ok. We had reached the end of the line. As we stepped off the bus, the same two Korean girls waved us goodbye and gave us little Hershey Chocolates. As though it was some sort of reward for making it to the train station. It was the funniest thing ever, as Jenny and I were just in awe that we'd made it back to town and we're now being rewarded a prize for it. 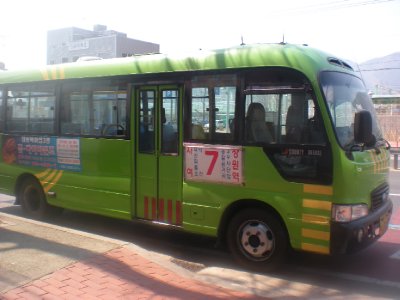 Our bus, what a lifesaver! 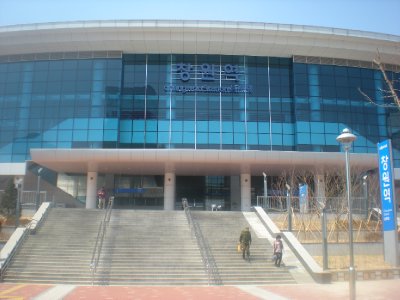 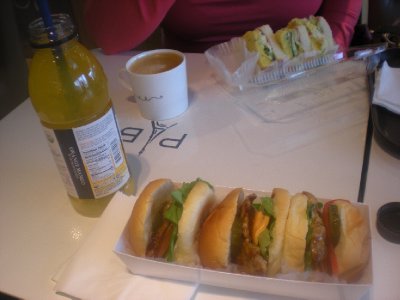 As we made our way to the pedestrian crossing, we spotted a Paris Baguette store and went in to have lunch. It was so good to get some food in our bellies, especially after our little freak out. We were now on the otherside of Changwon, so we decided to walk home as we could explore the streets this way. The footpath was lined with Cherry Blossom trees. It was so beautiful and gave an insight into how lovely spring is in Korea with all the flourishing flowers. We laughed all the way back home about our adventures. I don't think we'll be going back there any time soon!
x 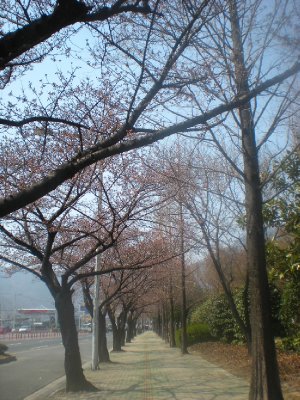 Junam Wetlands remains copyright of the author Two Otters, a member of the travel community Travellerspoint.