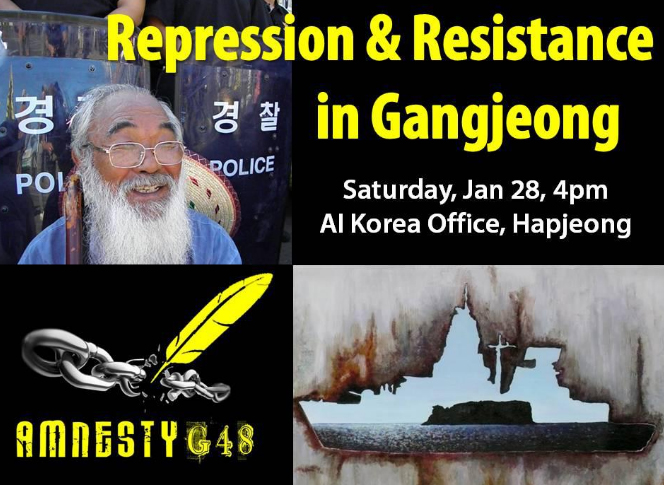 Please join us for the first Amnesty G48 meeting of 2012. Besides learning about the situation in Gangjeong, we’ll be planning a field trip, discussing 2011’s campaigns, and setting up new coordinator roles to increase our level of activity this year.

January’s Meeting Topic: Resistance and Repression in Gangjeong ~
The South Korean Government is constructing a US$970 million base in Gangjeong, a small village on Jeju Island which is a UNESCO-designated Global Biosphere Reserve. This construction is taking place against overwhelming opposition from the local community (one vote put the total at 94% against) which has been waging a nonviolent resistance movement for the past four years. An increasingly large number of arrests have taken place over the last year with police indiscriminately targeting community members including village leaders, young students and elderly residents alike. The planned base would accommodate 20 warships and would be open for use by US ships. While the Navy claims that the base will serve to strengthen Korea’s national defense, the majority of Gangjeong’s residents and a growing number of peace activists around the world are concerned that the construction of the base would in fact increase insecurity in the region.

We’ll watch a 30-minute Al Jazeera documentary following two members of the village, trace the history of the nonviolent resistance struggle, and look at the increasing level of arrests and police force being used against villagers in preparation for a field trip down to Gangjeong Village in March.