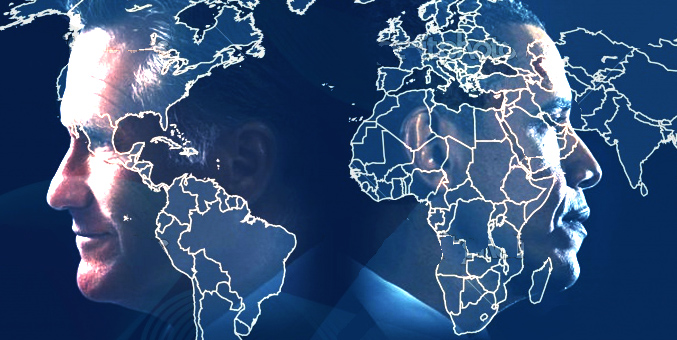 You know how little Asia counts for most Americans when both candidates for president ignore it in their first two debates other than to talk about China’s artificially low exchange rate and enormous trade surplus with the U.S. Mitt Romney shows no sign of worrying about the implications, military and economic, of getting tough with China. Nor does he seem concerned about his own profiteering firm’s role in exporting jobs while investing in Chinese companies that in turn profit mightily from exports to the U.S. President Obama counters by defending his record of frustration in dealing with China but fails to come up with any strong resolution of the impasse.

We have to assume they’ll say a little more about China, and Asia, in their final debate Monday night—Tuesday morning in Asia—that’s supposed to focus on foreign policy, but it’s hard to imagine they’ll have a credible answer on how to deal with China’s expansionist tendencies from the Yellow Sea to the East Sea to the South China Sea. They’ll want to preserve the U.S. alliance with Japan but won’t really defend Japan’s hold on the Senkakus, aka Daioyu, even though Japan would surely expect U.S. military support if push comes to shove.  And we can be absolutely sure both will want to avoid taking sides on Japan’s claim to Dokdo, aka Takeshima, so firmly held by South Korea, America’s other northeast Asia ally, as to render the dispute irrelevant.

Which reminds me – they’ll need to reaffirm undying U.S. support for South Korea against the North while talking up hopes for enticing the North into returning to negotiations, with the South, with the U.S., with anyone. Same old, same old, blah, blah, blah, we’ve heard all that before..

All of the above, though, will be by way of afterthoughts, occupying only a few minutes of debate time. Nine tenths of “foreign policy” will focus on the Middle East, on whether or when to withdraw U.S. forces from Afghanistan, as Obama has promised, on whether to support revolt in Syria and respond to Israel’s calls for preemptive action against Iran’s nuclear ambitions. Nor will the candidates forget Europe while those southern tier countries, Spain, Italy and Greece, wallow in debts and unemployment figures that frighten investors worldwide. 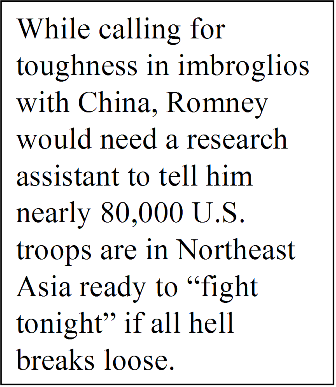 Under these circumstances, you have to wonder what the Asian half of the world means to Americans.  Sorry to say, but maybe the politicos know exactly what they’re doing when it comes to getting through to the American electorate. If you divided the world into basic geographical categories, the Middle East would rank at the top since that’s where the wars are going on, where U.S. troops are fighting. And that’s also where Iran poses a threat by supporting regimes such as the one in Syria and rebel movements along Israel’s border with arms and money – and by going on with a nuclear program leading no one knows where.

Number two, if the stories one reads and sees are any guide, comes Europe, the region from which the ancestors of the vast majority of Americans emigrated over the centuries. Europe counts for all the more these days since the “Eurozone,” as it’s come to be called, is suffering from economic difficulties most dramatically in those Mediterranean countries. Stock markets rise and fall depending on how they cope with crisis. A protest in Athens, a concession to demands to go easy on austerity  — and stocks fall like dominoes from Frankfurt to London to New York and on to Asian markets.

Number three comes Latin America. Americans, that is citizens of the U.S., don’t know where most Latin American countries really are south of Mexico, but we’ve all read enough stories about drug cartels and smuggling and illegal immigration and high crime rates among “Hispanic” Americans to be aware that Latin America is a tough place. Mexico tops the list of Latin-American troublemakers in view of both its size and common border with the U.S. Reading all those stories of murders, massacres and wars among rival gangs, you have to wonder if the whole country isn’t at war. Then, of course, there’s Cuba, holding out all these years against severe U.S. pressure, and the Dominican Republic, source of some of baseball’s superstars. Americans can’t stand “illegal immigration” from Latin America, but we do love those ballplayers.

Finally, number four, there’s Asia. While calling for toughness in imbroglios with China, Romney would need a research assistant to tell him nearly 80,000 U.S. troops are in Northeast Asia ready to “fight tonight” if all hell breaks loose. He clearly would rather have no policy at all when it comes to dealing with military threats from North Korea, much less its Chinese benefactor. 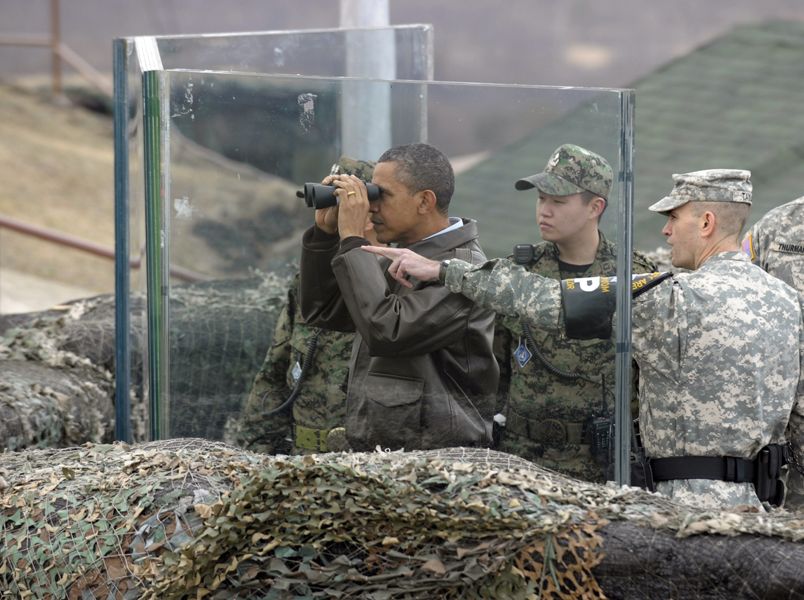 That’s not to say, of course, that Romney, if elected, wouldn’t dream up an Asia policy in a hurry. That actually wouldn’t be too hard. All he would have to do is carry on as Obama has been doing for nearly four years. Obama has been supporting South Korea quite firmly vis-à-vis North Korea. You can bet, if Romney were to come to Korea, he would make the usual quick trip up to Panmunjom, shake hands with a few U.S. soldiers, and talk with seeming firmness about standing up against the North. There’s no telling, though, how either he or Obama would respond if something were really to “happen.”

Then there’s Japan. While going after China’s huge trade surplus, could Romney do a thing about Japan’s surplus? And how would he deal on questions about the Senkakus and the “northern islands,” under Russian control since Red Army troops took them over from Japan in the last days of World War II, aka the Pacific War?  The whole U.S.-Japan alliance could be at stake. The U.S. bases on Okinawa – for years the target of protest – would be in jeopardy if Japanese authorities asked, Why have them if the U.S. is reluctant to fight for the Senkakus?

In this tangle of conflicting interests, wouldn’t it be nice if the U.S. were to advise the Japanese, We’ll be much more enthusiastic about the Senkakus if only you’ll drop your claim to Dokdo?  That’s not going to happen, though. Such matters rank at the bottom of U.S concerns. The best hope for both Obama and Romney is that nothing happens out here between now and election day.

Donald Kirk is a veteran correspondent and noted author on conflict and crisis from Southeast Asia to the Middle East to Northeast Asia. He has covered wars from Vietnam to Iraq, focusing on political, diplomatic, economic and social as well as military issues.

He most recently published “Korea Betrayed: Kim Dae Jung and Sunshine.” His Web site is donaldkirk.com

END_OF_DOCUMENT_TOKEN_TO_BE_REPLACED
Do you think masks should still be required on public transportation in Korea?
Yes
58%
No
42%
Total votes: 118