Get ready to learn how to say ‘Korea’ in Korean, because we’re going to teach you how in about 5 minutes flat!

This is one of the first words many people learn in Korean, since it’s used to often when speaking Korean or traveling to Korea. It comes up time and time again.

In this short lesson, we’ll get you using the word and some other forms of it. We’re going to teach you how to say ‘Korea’ in Korean and as a bonus, we’ll give you some sample sentences, and give you ideas for how to remember it easily.

Let’s get right into it.

The way to say ‘Korea’ in Korean is 한국 (hanguk). Just two syllables! Take a look at how it’s written in Korean and get a feel for its pronunciation: 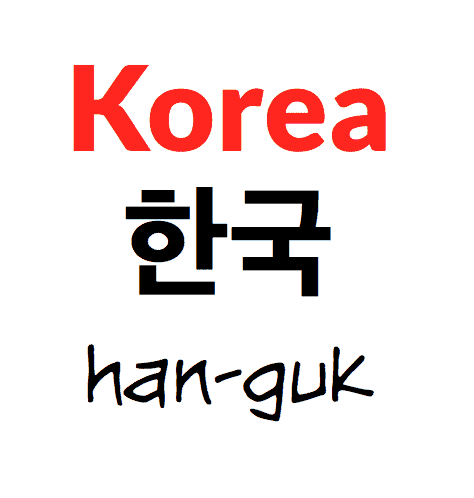 Romanization and Vocabulary Memorization – A Warning

As you can see, we’ve written the romanized version of the word (hanguk) above to assist with pronunciation for beginners. It’s definitely a great way to easily pronounce new words when you’re just starting out. That being said, if you intend to delve into learning the Korean language, our recommendation is to avoid romanization alogether and just move onto becoming comfortable with Hangul (the Korean alphabet).

“Why?,” you might ask. We’ll, we’re glad you asked! The biggest reason is that romanization can be confusing is because the English characters cannot perfectly replicate the sounds that Korean characters make. Add that to the fact that there are multiple methods for romanizing Korean, and it just complicates things. You need to learn each method to be able to read the words, since different websites or signs may use different methods. Cut out the time it takes you to learn romanization methods and just invest 90 minutes in learning to read Korean – that’s really all it takes!

Picking up vocabulary words here an there is a great way to help you start getting a feel for the Korean language but if you really want to start having conversations or be able to use the language, it won’t get you very far. We recommend by starting to learn some phrases or taking a course and studying the grammar of the language. Take a look at our free list of Korean phrases or consider joining our full Korean course and we’ll help you learn Korean in 90 days!

Other Ways to Say ‘Korea’ in Korean

Although Koreans most often refer to Korea as 한국 (hanguk), the full name of the Republic of Korea is 대한민국 (daehanminguk) which translates as ‘The Democratic nation of the Great Han.” You’ll often hear this being chanted during international events to show a sense of pride for Korea.

Also, as you may know Korea is divided into two different nations. We have been specifically talking about South Korea, but if you wish to refer to North Korea, you can say 북한 (bukhan), which literally means “North Korea.”

Now that you’ve learned how to say ‘Korea’ in Korean, you’re ready to move onto some upgrades! Let’s learn the ways to refer to a Korean person and the Korean language:

We’ve added some sample sentences to help you get a feel for how the word ‘Korea’ in Korean is used. Can you still remember the word? Try to find it in the sentences below and grasp their meaning. As we mentioned before, your main study focus should always be on the practical usage of the word in phrases and conversation, so this should help.

한국의 수도는 서울이다. The capital city of Korea is Seoul.

한국에서 영어를 가르치고 있어요. I am teaching English in Korea.

How to Remember the Word

Learning new Korean vocabulary words isn’t easy! It takes some time to let them sink in. You can speed up the process by making associations to help you remember them rapidly.

Finding words that sound similar in English or making silly pictures in your head are two easy ways to go about this. If you have a base knowledge of some simply Korean vocabulary, you can also use those as associations.

For example, imagine Han Solo from Star Wars! The word “Han” sounds similar to the first syllable in the word 한국 (han-guk). Also, the second syllable (국) is the same as the word for ‘soup’ in Korean. Imagine Han Solo visiting Korea and sitting down to a nice hearty bowl of Korean soup (국)!

What’s your favorite thing about Korea? Do you have any ways you like to remember this word? Leave a comment below and let us know!