Skip to main content
Tuesday was Childrens’ Day here in Korea so we made the most of our day off with a trip to the beach.

Songjeong, the most westerly of Busans’ beaches, is relatively free of the high rise sprawl that dominates the others. It also seems to enjoy better water quality and tends to get less crowded, making it a great place to loll about the sand for a few hours on a sunny day. 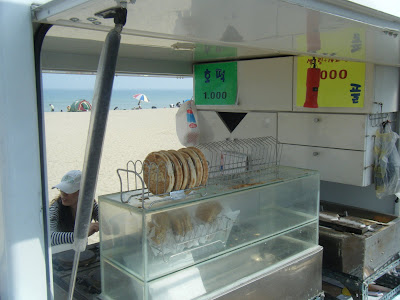 A number of small food stalls periodically dot the promenade here, and with food never far from the equation I quickly decided on buying some Hoddeok, a kind of hollow cinnamon pancake. At a mere 1000 won a piece, these treats were exceptionally good value and with the vendor’s prime beach side location, I didn’t even need to put my shoes back on. 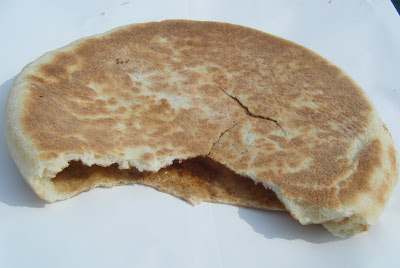 It was good. The thin, slightly crispy outer shell enclosed a sugary, cinnamon jam–like substance so sticky you could catch wasps in it. Sandwiched between its bodyguards, the filling was sweet without being sickening. The best part however towards the end when the cinnamon had trickled down to the bottom of the bun, creating a concentrated, gooey reservoir through which the last few bites were transported to decadence and hell and damnation.

With the temperature nudging the mid-twenties and the previous night’s carousing having drained me of around 90% of the water from my system, I had worried that the Hoddeok would prove too much for my tortured insides and rob me of what little moisture remained, rendering me as motionless and helpless as a beached whale. Happily however, it did no such thing and before I knew it I was bounding into the water obliviously.

I even managed to keep sand out of it.