Today was exciting. Tiger and I were catching the KTX Train from Changwon to Seoul. It would take us a little over 3 hours to get there at flashing speed! 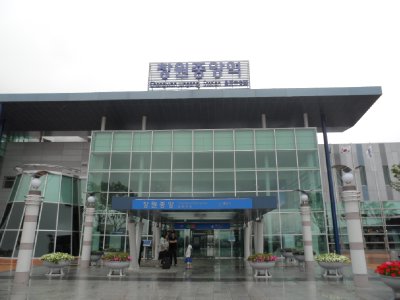 Changwon University Train Station. It was a cold and wet morning

We hadn't bought our return tickets yet, so we did it this morning. We got First Class seats on the way back too, only costing us W64,000. Awesome.

We soon walked to the platform and boarded our 10.15am train. Unfortunately, I forgot to take photos, but it was very spacious, with plenty of leg room and we had available snacks throughout the ride. I love the waffles. There was also WiFi in some sections of the train, but I didn't find it worked very well. Then again, my battery was low, so maybe that had something to do with it. 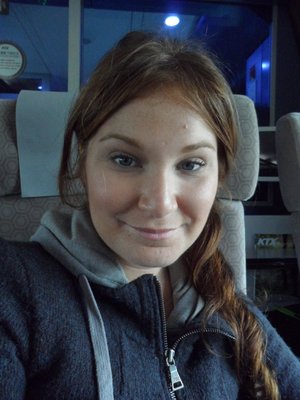 Going on a train trip!

I fell asleep for most of the journey, but soon enough we arrived in Seoul. The station itself is quite big. We walked over to the taxi rank and told/ showed (we had the address written down in both English and Korean) the driver where we wanted to go. He kinda scratched his head a few times and all of a sudden started taking our luggage out of the boot and talking (sounded more like yelling) the the next taxi driver.

I was annoyed. What now. How HARD can finding an address be, ESPECIALLY when you have a GPRS. Grrrr Korean taxi drivers. They are my ultimate pet hate. ANYWAY. After much confusion, as we didn't know what was going on because noone bothered to include us in their ramblings, we were shifted to another taxi. The driver could speak alittle English and all I understood is that he said don't worry, I take you. Good enough I thought.

This driver too, didn't know where to go, so I rang the owner of the guesthouse, Eric Kim and got him to instruct the driver. Apparently the problem was that the hostel was located down an alley way, that's why it completely confused the Korean Drivers. We finally sorted it out and the driver was able to drop us off near the closest train station- Jongkak and we would come out through across exit 7. From there, there was a Skin Food store and an alleyway next to it. We had to walk straight through the alley and voila!! Ciara920 would be waiting there for us.

We were relieved once we arrived. We could finally relax and settle into our room. After doing all the paper work with Eric, We went up to our Family Room. I now know that my idea of a Family Room is very different to what asians/ hostels think Family Rooms are. To be honest and fair, this was my first time staying in a hostel "guesthouse" and the only reason why we went with it was because every hotel in Seoul was booked out for the days we would be visiting, so it was either settle for a hostel stay OR cancel our trip completely- which we really didn't want to do. 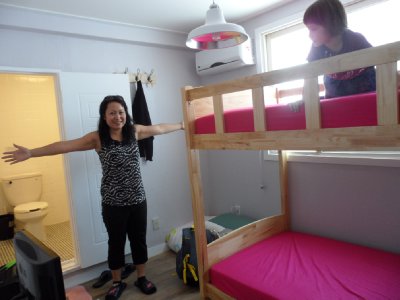 We opened the door and I went quiet. It was clean and the bedsheet were hot pink, but the size of it mortified me. The Family Room was, on average, the size of a small bedroom. It had two bunkbeds and a fold out mattress to sleep on the floor. Ohhhhhhhhhhhh how bad I wanted a hotel right now. Like I said before, you'll have to understand my look of shock. I have never stayed or setfoot in a hostel. I was rating this like camping. Again, I have never been camping (by camping I mean in the bush with a tent) and I don't really think I want to. Too many bugs.
You can call me princess or whatever. I don't care. I like my hotel rooms!!!

I soon realised this would be home for the next 3 nights so, it was best to laugh and freshen up and get out!!! We soon headed out to explore Seoul. We got a map from the front desk and thought we'd wonder over to Myeong-Dong Markets. We didn't realise how BIG these markets were, and Myeong-Dong was just one. In the city of Seoul, there are about 3 major market places, where you will find department stores, little boutique style stores and the fakes stores. There is something for everybody, so make sure, if you ever visit Seoul, bring enough money and bring enough luggage to be able to take all your wonderful, new treasures back home-Seoul is one big department store. 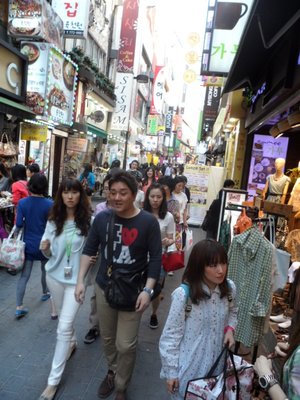 The Myeong-Dong crowds coming to get us, Arghhhh!!! 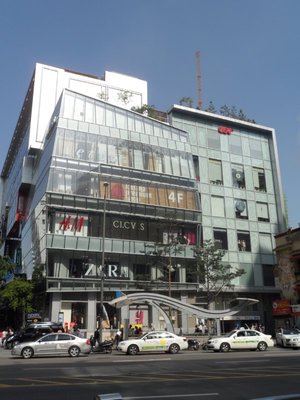 My favourite stores, so conveniently located

on the map, our hotel looked as if it was quite far from the city centre and when I booked the Ciara, I thought we would be cabbing or taking the subway to get in every time, but in reality, we were only a short 15 minute walk from Myeong-Dong. I may not have liked the hostel, but atleast it was in a good location.

It was quite overwhelming seeing and being amongst the swarm of people. I think I've been living in Changwon too long. The crowds were freaking me out!!! lol. I was so happy when I spotted Zara and H&M, not to mention NineWest and Forever 21. This was going to be awesome!!!

We didn't do any shopping this afternoon. We were pretty tired and hungry, so we decided to head back to the hostel and get ready for dinner. On the way back home, Tiger bought us some melon on a stick. It was a sweet, refreshing snack. I think I'll be serving my fruit on sticks too back home. I love the idea lol 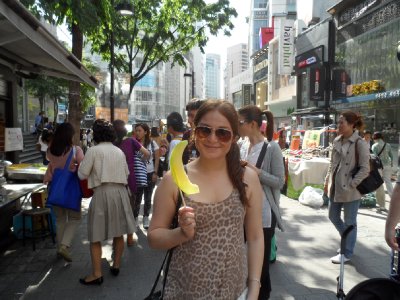 Me and my Melon Stick

Hello Seoul!!! remains copyright of the author Two Otters, a member of the travel community Travellerspoint.