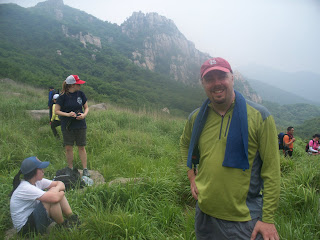 We got up early this Saturday to meet some friends for a hike up and over Geumgang from Beomosa. Prior to this I had been going up the cable car and hiking from there so I was a little apprehensive but my condition throughout the day was good and my endurance was actually kind of surprising.
We had gone the night before and got 2 kilos of samgyopsal for a picnic. I was packing that and fruit and a cooker and fuel, plus water. I would estimate thatI was carrying about 10 kilos all together but my pack (Deuter Futura Pro 38) spreads it out and holds it high so I was able to climb cool and easy. I can't say enough about this bag. It is a joy to climb with.

After the usual launch troubles we got out to Namcheon and met Mr. Kim and Mr. Tak, who were to be our guides. In addition to Yujin and I our party included Rachelle (a Missoula bred mountain girl and hardcore climber from my former school), Mr Bak (Korean buddy from the bar), and Nuna (said bar's long-suffering proprietress). We went a strange way, up past the bus parking lot (where I was startled to find that we were not even taking the bus which takes you about a quarter of the way up to Beomeosa Temple) and in between a couple of buildings and immediately onto a dirt path through some hillside garden plots planted with corn and cabbage. The smell of the corn gave me a little bit of homesickness but I was soon busy climbing and got over it.

The lower slope was strewn with pieces of jagged granite ranging from baseball to suitcase size. The trail is hardpacked clay and with these pointy rocks sticking out everywhere. I am hiking in a pair of lowtop Keen walkers with leather uppers and although they are comfortable and offer quite a bit of protection to the top of my feet they are a little light in the sole to I was being careful where I stepped. Last week we came down in a steep wash that was almost all rock and my feet were beat up pretty bad when we finished.

The flora at that lowest level is tall pine trees that are without branches until about thirty feet up, where they form a thin but tight canopy. The ground cover is sparse and low: fern and bracken, some ivy and a few light grasses. Daisy fleabane and camellia grow pretty much everywhere but we were climbing to about 800 meters and I am surprised at the distinct ecosystems even within that short jump. It goes from pine forest to mountain meadow with ground cover changin almost constantly. In addition, the east and west side of the mountain seem to have different climates. The ridgeline runs roughly north and south and although both sides are surrounded by city, the western face fronts a huge river delta that gets significantly more rainfall. Where we crossed little brooks on the east side we were fording rushing streams on the west. The ground cover is much thicker on that side and there are deciduous trees much higher.

I was disoriented so I kept expecting to cross the temple road which makes a kind of one way loop up and back down the mountain. I could hear the temple, a monk singing prayers and a mallet on a wooden bell, and I kept hearing it as we went above and beyond it on the left. After a bit I deduced that we were not inside the loop at all. I had been counting on that as a way to mark our progress, but it was actually liberating to find that I was unable to see where I was at or how far I had to go. I could just concentrate on my feet and the beauty around me.

It had been hot when we set out, but we soon climbed into the sweet cool of the pine forest. We climbed over and along and sometimes in the little brooks that bubble down from the peaks. They each sing thier own tune. There were bird calls in the air but I didn't see many. Notable were cuckoos calling back and forth across the hillside. Near the top we can to a small ledge where there was a tiny house and garden and a little spring coming out of the hillside, channelled through a piece of bamboo and trinkling out into a giant bowl carved out of a single piece of stone. The water filled the bowl and trickled down over the edges. Tin dippers were hanging from nails in another piece of bamboo at the side. Weary travellers were stopped there, sitting in the shade, refilling water bottles and soaking down neckerchiefs. That water was sweet and cold.

Soon after that we left the trees and entered the alpine meadow that runs along the higher ridge line. We stopped there to take in the view, which was specatacular. To the right and the left huge split granite spires jutted up into the sky, looking for everything like a set of precariously stacked children's blocks the merest breeze might blow over. Somewhere below the city smouldered but we couldn't see it: the whole valley was shrouded in mist. Far off a few other mountains poked their heads up.

We crossed the wall of the Geumgang fortress and began almost immediately to descend. After crossing our first large waterway we came to a small group of buildings in a hollow on the other side. Wooden platforms were built right up to the edge of the rushing stream and people were sitting there eating the simple fare served by the women in the hut: fresh tofu (still warm!) with kimchi and ganjang sauce (soy sauce, sesame oil, sugar, red pepper powder, sesame seeds, and chopped green onion...I could drink it), fresh cabbage leaf salad in red pepper sauce and sesame oil, and, the ubiquitous mountain likker, makgeolli. After a year here I have finally acquired a taste for this tart rice-based concoction. If you like a nice toothy Belgian wheat beer you should try this stuff. It looks like drinking yoghurt and kicks like a mule.

This was to be our appetizer so we moved on and about ten minutes later found ourselves at a nice flat spot along a boulder strewn stream bed. You had to talk loud to hear eachother over the sound of the water finding its way around and under and over all the rocks. Unfortunately, we had no sooner gotten our stove out than it began to thunder and pour buckets of rain. We soldiered on, Yujin holding the lone umbrella over the griddle. Soon we were all soaked but we got it all packed up again and hightailed it down the mountian to the road that would take us down to the bus stop. Along that road we found a little tent restaurant where we stopped to check our cell phones and cameras (all fine...did I mention I love my bag?) and have a little snack: odeng (fish cake soup) and haemul pajeon (green onion pancakes with seafood...usually squid, shrimp, and clams but depends on season/locale. One of my favorites.).

On to the bus and down the winding hillside road to town for a taxi ride back to the bar where we could discuss our individual and collective heroics over half-liters of maekju, sitting barefoot on newspaper, our muddy clothes hanging in the bushes out front.