Skip to main content
S.Korea in mourning with 153 lives lost from the crowd crush in Itaewon, Seoul, during the Halloween festival at 10:15 pm Oct 29Sat). A Halloween costumed crowd estimated at 100,000 was jam-packed in Itaewon district of 82,000 sq.m (20.2 acres) during Halloween revelry. People departing the area ran into people arriving in tightly packed alleyways around Hamilton Hotel. The crush occurred when a group chanted "push, push" to make their way, and the people in front fell. The slope on the narrow street next to Hamilton may have contributed to the disaster as people were sliding under the crowd, falling over each other and toppling like dominos. Most of the deceased were teenagers and people in their 20s, and there were 25 foreign victims. President Yoon Suk-yeol was at the scene the following day and declared a week of national mourning. This is the worst disaster in Korea since the Sewol Ship sink that claimed 304 lives in 2014.


Itaewon has been known for its vibrant nightlife and shopping area for foreigners, and a hot spot for S.Koreans who come to feel American and international cultures since the U.S. 8th Army HQ was stationed there during the Korean War. With the relocation of the 8th Army HQ to Pyeongtaek a couple years ago and with the curse of Covid 19, the business in Itaewon has lost its reputation, and many hoped the first Halloween festival this week in three years without a mask would bring vibrancy to Itaewon. May the young victims rest in peace. 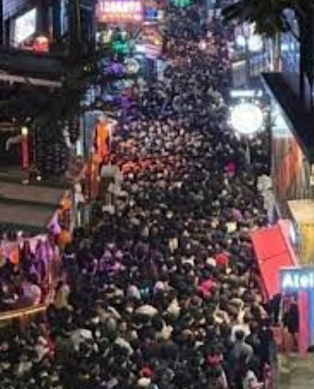 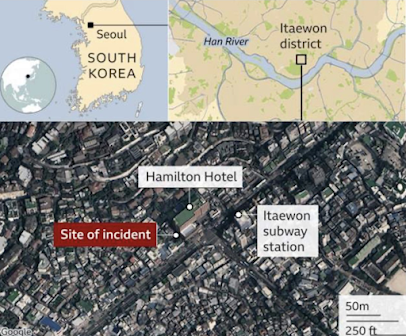