BUSAN, Oct. 1 (Yonhap) -- A blaze at an apartment building was brought under control after reaching the rooftop of the 38-story complex in a fire Friday authorities say seems to have started at a garbage collection room. No casualties were reported.  Firefighters battled the blaze for more than two and a half hours as it spread through the stairways after being first spotted at around 11:30 a.m.

Authorities said there does not appear to be any casualties as most residents were evacuated soon after the first signs of a fire. One or two were being treated at hospitals for smoke inhalation, they said. Investigators suspect the fire started at the garbage room on the fourth floor, also used for recycling. Highly flammable wall material and strong winds apparently fueled the fire, they said.


"Just moments after we saw smoke coming from the fourth floor, we saw the fire at the rooftop," one witness said.

The apartment building, including four underground floors, opened in May 2006 to 200 households and some offices near Haeundae Beach, a newly-emerging area for luxurious apartments in this coastal city.

From:  http://joongangdaily.joins.com/article/view.asp?aid=2926665
Fire turns luxury apartments into towering inferno
A massive fire at a luxurious residential complex in Busan, which spread across 33 floors in less than 30 minutes yesterday, shocked the nation and spread fear about the safety of the country’s high-rise apartment buildings, which are rapidly increasing in number and height. According to Busan police, the fire appeared to have started at a janitor’s garbage collection room on the fourth floor of the 38-story Wooshin Golden Suites around 11:33 a.m. Flames spread quickly through the ventilation shafts in the central stairwell and also along the highly flammable exterior walls of the structure. Within 20 minutes, the blaze reached the tower’s rooftop.

The fire department dispatched 70 trucks and a helicopter to the building, which houses 202 residences. Three choppers from the Korea Forest Service and Army were deployed. While no casualties were reported as of 5 p.m., chaos during the evacuation process was. A total of 38 residents were rescued from the building by fire authorities, including three who were receiving treatment for smoke inhalation. A 43-year-old firefighter was also injured. By 2 p.m., the fire was under control, but firefighters continued to battle the blaze into the late afternoon. The luxurious high-rise opened in 2006 in a newly developed area near the coastal city’s Haeundae Beach. Although the Busan fire department sent ladder trucks, the ladders only reached the 15th floor.Helicopters were used to rescue ten residents who took refuge on the rooftop. The police said it is investigating the fire’s cause.

“It appeared to have started in the janitors’ room and laundry on the fourth floor,” said a police official. “We have testimonies that scrap paper was burned in the janitors’ room.”
Experts said yesterday’s fire was their worst nightmare come true. They said high-rises around the nation are particularly vulnerable to fire because they are built with flammable exterior materials.
“The sprinkler system worked,” said Lee Gap-jin, a senior official at Busan Fire Department’s Geumgang branch. But building codes didn’t require sprinklers on the janitors’ room floor.
“And the flames on the exterior walls were too strong, so the sprinklers weren’t much help,” he said.

Lee said the use of curtain-wall structures and painted aluminum panels on the exterior of the steel-frame fueled the disaster. Although such buildings are relatively safe in an earthquake, it is extremely vulnerable to fire, said construction industry insiders. The paint coating the panels is highly flammable, they added.  Experts also worry that fire regulations have not been updated, although the number of high-rises has increased rapidly. In 2005, 60,000 households lived in apartment buildings taller than 30 stories, but in 2007 it went up to 120,000. This year, 260,000 households are in high-rise apartments. “Construction companies and building owners oppose stricter safety regulations because it will cost them a lot more,” said a fire department official

From the Korea Herald: Fire Guts High-rise building in Busan
By Bae Ji-sook

A fire engulfed a 38-story apartment building in the southeastern port city of Busan, Friday. No casualties were reported as most residents were evacuated soon after the fire broke out. Firefighters rescued 31 residents, four of whom were sent to a nearby hospital for examination. The fire started around 11:34 a.m. in a garbage collection room on the fourth floor of the Wooshin Golden Suites near Haeundae Beach, an affluent area of the coastal city, but was brought under control after reaching the rooftop of the high-rise.  An apartment resident said, “Shortly after we smelled the smoke, flames and fumes came all the way up to our floor.”

A helicopter and dozens of fire trucks were mobilized to fight the blaze.  “It was fortunate that not many people were in the building at the time because it took place during daytime. There were several elderly people and infants, but we managed to quickly take them out of the building,” Kim Jong-kyu, head of the Haeundae Fire Station, was quoted as saying by KBS.  He added that the wind was strong, making it difficult for firefighters to access higher floors.  The blaze was finally extinguished after two and a half hours. The building, built in 2006, is occupied by 202 households and several offices. The authorities expect about half of the accommodation units have been severely affected by the fire.  Meanwhile, the Busan city administration has come under attack for its lax measures in responding to the fire. Many residents complained that the fire report was not taken seriously enough and the evacuation of the building was undertaken too slowly. 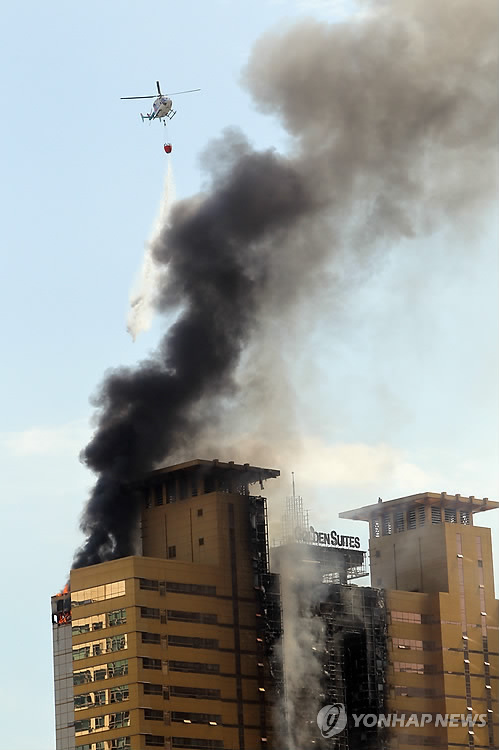 I was there. Pretty wild. Nice pics!!! I love the first one when it was really burning. Apparently it started on the 4th floor. A laundy place or a machine there. Just what I was told.
I've been translating the headlines on YTN TV news. It is reporting that 37 people were rescued, 9 of which were airlifted off the roof of one of the buildings. Four people (at least) have been taken to hospital from what I think was smoke inhalation. So far, there are no reports of people dying in the fire.
Nice work folks... tragic event. Thanks for keeping us informed.
I also think they've said that the panels used to make the suites 'golden' are made out of a styrofoam which is quite flammable which is why it's the roof and top floors that are burning. The fire melted its way up the back of the building to the top floors. From watching the footage, it seems that the only way they are trying to extinguish the roof fire is with helicopters dumping water on the flames. I don't see any other fire-fighting methods (doesn't mean it isn't happening. Just means I can't see it).

i'm there, they're not doing anything except dropping water from helicopters.

giant flaming heaps of metal are falling from the sky, this is nuts

Any info on what caused the fire?

I was watching this live on tv at the bath house today. Is this place fully occupied or is it new with just a few residence?

Apparently the glass or the outside of the buliding had some kind of chemical on it to make it look gold that was actually a fire hazard. It was an excellurant (spelling...sorry) of some kind. Crazy. Great pics!!!

No more updated articles today?  As of yesterday, Police interrogate a maintenance head of the building management company against the fact that they used the 4th floor as a sanitary space with smoking section and other office space, which is the "PIT" floor of the building where brittle pipes, welds are equipped as a part of central maintenance system, and that no fire alarm announcement was pronounced to building residents after the fire ignition exploded ["경찰은 관리사무소장 등을 상대로 각종 배관 등이 지나는 피트(PIT)층인 4층을 미화원 작업실과 휴게실, 사무실 등으로 사용하게 된 경위와 인화물질 사용여부, 불이 났는데도 안내방송을 하지 않은 이유 등을 집중 추궁했다"(Chosun.com)].

It looks quite bad about hierarchical structure of maintenance people's to react against the emergency, plus the problematic materials and the structure of the buildings themselves; but their indoor use of FLAMMABLE substance (presumably some chemical materials) to evacuate trashes out from the buildings. Here the most horrible fact in Korea is that their law allows to experiment with chemicals in industrial as well as non industrial buildings!