Skip to main content
Our day trip begins at a traditional restaurant that had obligingly opened early to accommodate our group of six. As soon as we settle down onto the floor mats, side dishes (called banchan, 반찬) and mountain vegetable bibimbap (sanchae bibimbap, 산채 비빔밥) mix-ins start arriving on our table. This will be our fuel during the all-day hike ensuing right after breakfast.  Today is devoted to conquering Namsan Mountain in Gyeongju. 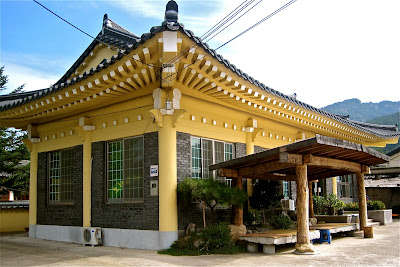 A bowl of sanchae bibimbap starts with a bowl of sticky white rice topped with vegetables. Ours had spinach, bean sprouts, onions, mushrooms, and various unidentifiable green and twiggy mountain vegetation. To that, we each add some red pepper paste (gochujang, 고추장) or fermented soybean paste (doenjang, 된장). 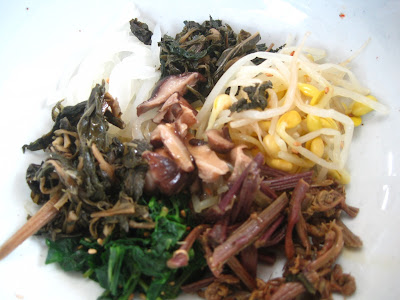 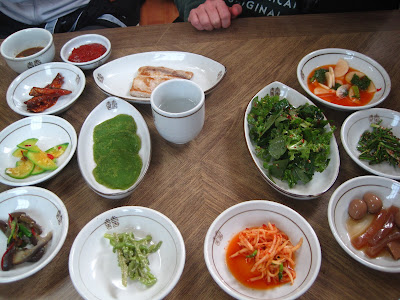 I ate up all the spicy, tangy-dressed lettuce salad and most of my bibimbap. Our other banchan included green pancakes, fried zucchini, marinated mushrooms, fish, radishes, and more. At the end, we were treated to some homemade sweet rice drink, which I'm pretty sure is called shikhae (식헤). It was light and sweet and cold, and really really delicious.
From the restaurant, we started onto Namsan Mountain's (남산) western face, entering near three mounds that are the Samneung Three Royal Tombs (삼릉). These tombs hold the remains of three Silla Dynasty kings: Adalla, Sindeok, and Gyeongmyeong, the 8th, 53rd, and 54th rulers, respectively. 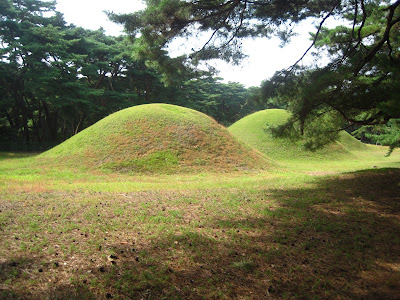 Just a short way up the Samneung Valley (삼릉골) trail that would lead us further and further into the Namsan District of Gyeongju National Park, we see our first Buddha of the day, perched up straight but whose head was taken from him at some point.
After this one, we pass a handful more of the Buddhas scattered over Namsan. They look relaxed and untroubled. Our group stops and takes photos at each, admiring how long they've been there and the care it took to carve and assemble them. My favorite is pictured below. He's the Seated Stone Buddha, sitting on a lotus petal and expelling evil by touching the ground. It was made in the 8th or 9th century, with some restoration work done just a couple years ago. 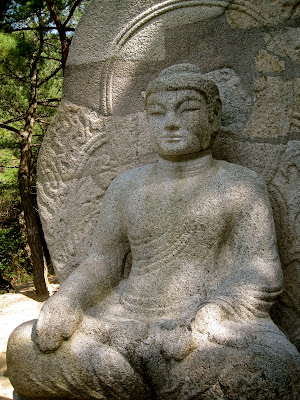 Next, we encounter six figures etched onto the side of a rock. Two are Buddhas, four Bodhisattvas. We have to study the rock for a few minutes to allow our eyes to follow the intersecting lines. 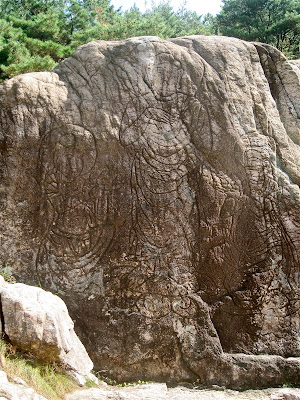 The most awe-striking Buddha of the day is the seven-meter-tall seated Seokgayeorae image carved on the side of Namsan. He directly looks at the Geomobong peak. Our hike takes us directly past the Buddha, and later on, we get a second view from higher up. 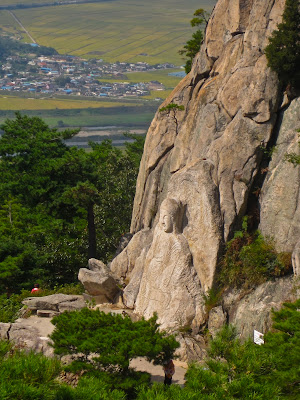 When we make it to the peak, we stop and fuel up with some PB&J's. There's no view from this peak, since we're completely surrounded by forest at this moment. The first treasure on our descent is this three story stone pagoda. The view from here is incredible. There used to be a temple here where the first Korean novel, Geumosinhwa, (written in Chinese) was authored. 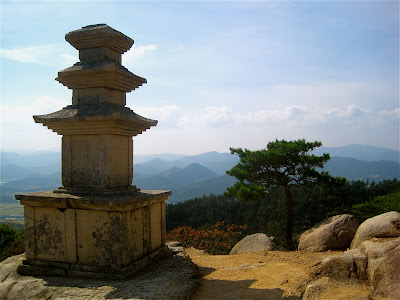 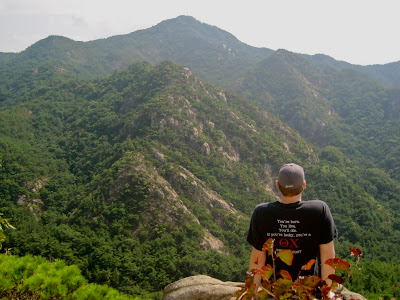 Our hike gets a little tenuous when we have to perform some fancy repelling action. Actually, the whole little part where you need the rope is maybe eight feet tall, but still, awesome. 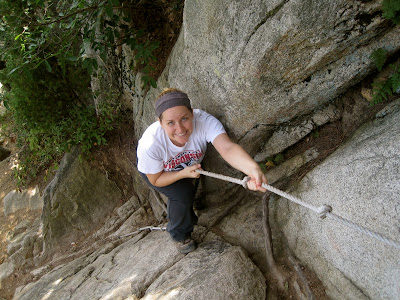 The last major Buddha we pass on the way down is a seated stone Buddha from the eighth century. Like his friend from earlier, his head has gone missing sometime over the years. He's sitting atop a three wheel pedestal. 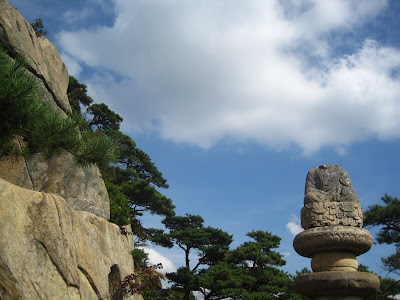 We're all famished after our hike, so we hop on the city bus and head toward the more central area of Gyeongju. Dwayne and Yuhee lead us to Sampo Ssambap (쌈밥) Restaurant for a little lunch. Ssambap is when you take some sort of leaf, maybe lettuce or cabbage, and wrap it around some rice, a little meat, condiments, banchan, whatever your preference is. This is awesome in an of itself, but this place was serving up ssambap to the extreme! Out came bowl after bowl after bowl! Side dishes, pastes, fish, meats, custards, until the dishes were completely covering our table! And all this for ￦10,000 per person (aprox. $9). 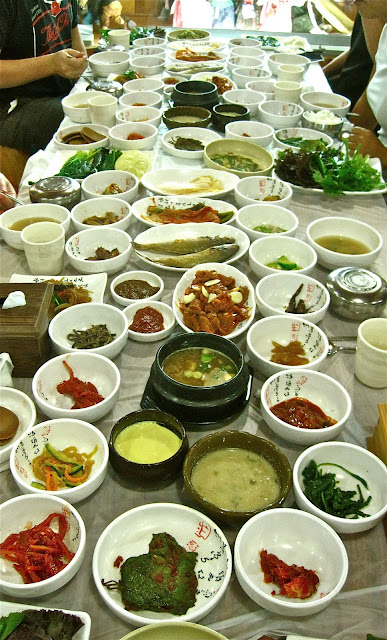 After dinner, not quite ready to end our day, we go to one more place for a drink before home. We walk along the backside of a park until we happen upon a restaurant. The place is packed, and rightly so. It's incredibly atmospheric, an open-air restaurant with courtyard tables as well as private tables in side rooms. It's called Dosol Maeul (도솔마을), which means "Stone Pot Village." 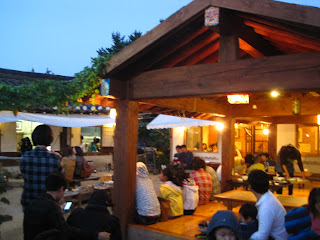 We order an appetizer, a mixed tempura-fried vegetable platter that included some tofu and lotus, and some Korean rice wine, dongdong ju (동동주). We are told that dongdong ju is makkeoli's more formidable cousin in terms of it's strength. The taste is unique but really refreshing and delicious. 맛있어요! 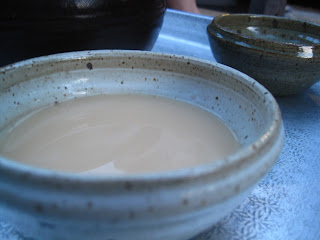 When we're all sufficiently fat and happy from the snacks, drinks, and fresh air, we start our walk back toward the intercity bus terminal. Once again, Gyeongju has been a revitalizing and relaxing respite away from Busan. I'm sad to see the day over, but there will be at least one more trip back in our future.

For more on visiting Gyeongju, see my post on our first trip there.