Ok, so here’s what I did. I was searching thru one of my boxes of 45s and I ran across Ureaus’ “Let Our Music Make Love To You.” I thought this obscure disc would make this week’s Funky Seoul Corner quite brief. After all, who has ever heard of Ureaus and this track on the Mel-Mel label? No one, probably. So I went on the net to confirm my hunch. 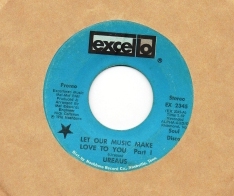 Well, I wasn’t overwhelmed by what I found, but I did find more than I expected. Turns out that Mel-Mel was a label out of Washington D.C.. But Mel-Mel was a one-off label, meaning that the 45 you see before you was the only 45 ever put out on this label. Why only one release? I have no idea, actually. In the realm of funky, soulful hard-to-find 45s you find that one-off labels are not all that uncommon. I’m guessing, too, that Mel Edwards, the producer and arranger of the disc, was behind the label’s name. I’m also putting one and one together and kind of guessing that since Mel-Mel was from the U.S. capital, so too was Ureaus.

One thing I did find interesting was that you can find Ureaus’ “Let Our Music Make Love To You” both on the Mel-Mel label and the Excello label. (The Excello copy you see here was copped off another site. The Mel-Mel copy, however, is my own.) Now, Excello had been a long-standing label based out of Nashville, Tennessee. It had been around since the early 50s. It released mostly country and blues tracks, although not exclusively, as the Ureaus release will attest. It should be noted here, too, that the Ureaus 45 was the second to last release on Excello in 1975.

You may ask yourself why the release on two different labels? In my research within the world of 45s I discovered that it was fairly routine for a local release to be picked up by a national label. I’ve seen this happen a number of times. I would get one 45 on a particular label only to discover later that the very same track had been released on another one. As I mentioned earlier, Mel-Mel had only one release. Like so many one-off labels, I’m sure that it had very limited financial resources. So one of two things happened: Either someone at Mel-Mel sent out copies of its 45 to other record companies or someone at Excello discovered the Mel-Mel release somehow. There was one clear advantage of this arrangement regardless of how it happened. Excello had the upper-hand at national distribution, which is what Mel-Mel and Ureaus both would have wanted. One would have hoped that national distribution would have led to more sales at record shops and more plays at radio stations. Whether or not this actually happened with this release remains unclear. On that note, the music will have to speak for itself.

N.B. I have included both part 1 and part 2 in the sound clip. Part 2 is the same song, but it is the “disco version.” Listen and enjoy!