For this week on Funky Seoul Corner we go to New York City by the way of Atlanta, Georgia. Musicor was an active N.Y.C. record label during the 1960s and 1970s. This label was a rather large one that featured talent from many musical genres, from soul to latin, from rock to country. Perhaps two of the biggest stars on this label were Gene Pitney and George Jones, both of whom garnered many hits for Musicor during the 60s.

And for this week’s 45 we go to 1967. Lee Moses, an Atlanta-native who relocated to New York City, cut three 45s for Musicor in 1967. One of these 45s was “Bad Girl.” “Bad Girl” is raw soul. On this track Lee Moses is on vocals and, I presume, rhythm guitar. (Lee was noted for his guitar work as well as his vocal skill.) As you might guess from the title, this tune is about the triumvirate of romantic relationships—lust, love, and trust. Lee speaks and sings from experience. You just got to believe what he has to tell you when you listen to his s 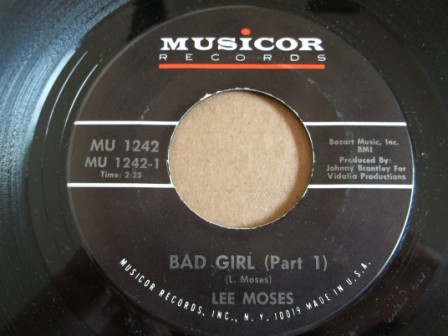 tory. He knows what he is talking about. The sincerity in his voice leads you to believe his tale of woe.

Lee Moses recorded up until 1971. His final release was a full lp titled Time and Place. This album has something of a legendary status–an original copy of this lp fetches lots of Benjamins on the open market—if you can even find one. One highlight of this album is Lee’s version of “Hey Joe” in the way only Lee Moses can do it. Jimi would have been proud! (Moses and Hendrix were both part of the later-half of the 60s New York City musical scene.) But Lee basically disappeared after the release of this album. He returned to Atlanta and performed locally, but never really recorded again. Who knows what happened? You can click here http://en.wikipedia.org/wiki/Lee_Moses for Wiki’s short bio on Lee Moses.

N.B.: I have included both parts 1 and 2 of Bad Girl for your musical enjoyment. In the future, whenever I feature a track that has 2 parts, I will record both parts so that you can hear the tune in its entirety. After all, it may be two sides of a 45, but it is still one song… I have also included a photo of Lee Moses below: 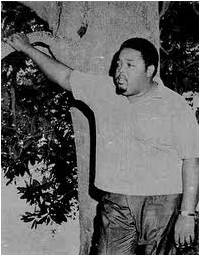