Cal Green was a guitarist who dabbled in a broad range of musical styles. Growing up in Texas in the 1940s and 1950s, he was at first influenced by the blues. Clarence “Gatemouth” Brown was his idol as a youngster. Then, in 1954, Hank Ballard and The Midnighters came thru town in 1954. An R&B outfit, Hank and the boys had just lost their guitarist to the draft and were in need of a replacement. Cal fit the bill, and he played with this group until 1959. Enter the 1960s and Cal Green entered the world of jazz. Most notably he played with organist Jack McDuff and vocalist Lou Rawls during this time frame. 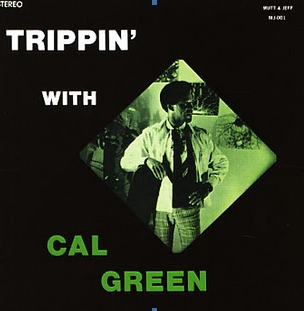 Trippin’, the 45 you see here, is on the Mutt and Jeff label, a small Los Angeles-based label that issued a handful of releases in the late 1960s. Some sites tell me that this single was released in 1967 and others tell me 1969. I do know, though, that Cal Green released the album, Trippin’ With Cal Green, in 1969. So maybe the single came out a year or two earlier. I can’t say for sure. Anyway, I’ve copied a photo of Cal’s album below for your visual enjoyment:

Trippin’ has an airy atmosphere to it a la Wes Montgomery but without the lush syrupy string arrangements. Indeed, it is a chilled-out funky soulful jazzy affair. Have a listen!!!